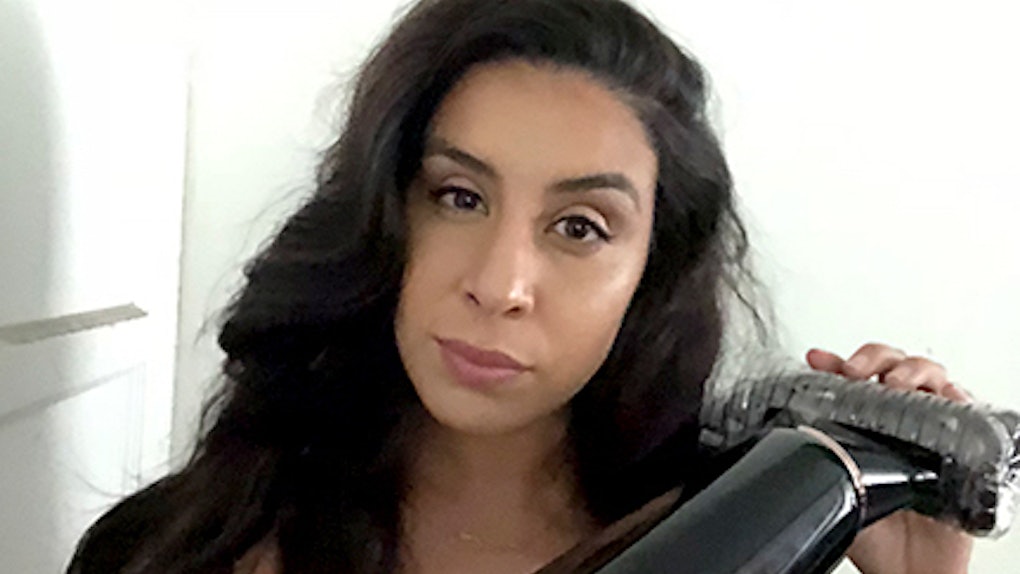 This Water Bottle Hair Curling Hack Is Going Viral On Social Media, So I Tried It For Myself

This Saturday, I did the same thing I do almost every Saturday morning: I woke up, lay in bed, and scrolled through my Instagram feed. In my half-awake, mindless scrolling, I came across a video of this girl filming herself in her bathroom, showing off a hair dryer water bottle hack. It seems that she cut the top off a water bottle and made a slit on the side for her flat blow dryer nozzle to fit in to.

In the video, she loads the ends of her hair in from the top of the bottle, sticks the nozzle in the opening on the side and powers on the dryer. The air creates a hair tornado, so to speak. After a few seconds of whirling her hair around and around, she removes the bottle, and her hair is left in a single, yet perfectly shaped twist. Upon shaking it out, she's left with a gorgeous, soft wave throughout.

Within hours, I began seeing endless reposts of the same video and a ton of beauty junkies trying it out for themselves. Even big names like Huda Kattan and the Kardashian's hairstylist Justine Marjan tried it out for themselves. So obviously, I was convinced I needed to take this viral hair hack for a spin (pun intended).

I grabbed an empty water bottle, cut the top off, and carved a slit into the side as those who tried this hack did. I loaded my freshly washed hair into position and fired up the blow-dryer. I should also mention that I observed girls doing this trick on completely dry hair. Mine was screaming for a wash, so I let it air dry before stuffing it in a water bottle. However, I left it slightly damp because blowdrying dry hair didn't make much sense to me.)

My first few attempts went terribly. I did the exact same thing I saw in the videos, but for some reason, my hair flew out of the top of the bottle every time.

On another attempt, I decided to hold my hand over the top of the bottle. I figure if I cover up the opening, my hair would stay in the bottle and spin around. Seconds after the bottle filled with air, I burned my hand, so I removed it, and again, my hair went flying out the top. WTF!?

On to plan C: I thought to myself, "OK, you can do this. Why don't you cover the top with your hand, turn the dryer on the cool setting long enough to get some momentum, then once your hair starts spinning, hit it with the heat and take your hand off?" This internal self-to-self advice sounded great at the time. Though the hack clearly was not as simple as I saw on Instagram, I felt like I'd figured it out at that point, right? Wrong!

By then, I'd lost count of how many times I failed. I figured out a way to keep my hair from flying out the top and was no longer burning my hand, but even with a hand covering the top and air flying out on the cool setting, all my hair seemed to gather up in a single area, rather than spin in circles. I pointed the nozzle in different angles and played with the air speeds, and nothing seems to be working.

I'm not a quitter, but an hour later, I was too frustrated to go on. And at this point, I realized I could've curled my hair with a curling iron in that time... twice! I don't know what the girls successfully mastering this viral hack did differently, but if this isn't proof that Instagram isn't always real life, I don't know what is!