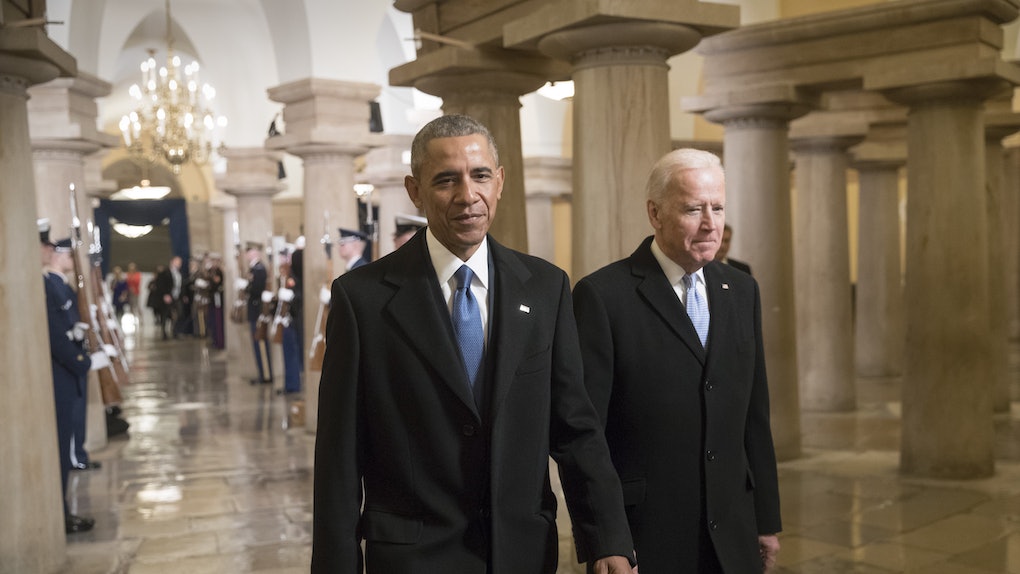 Former Vice President Joe Biden and President Barack Obama have reunited for a discussion of the major problems facing the United States as the 2020 presidential election nears. A clip of the conversation was released by the Biden campaign on Wednesday, July 22, and Obama and Biden's "Socially Distanced Conversation" is set to premiere in full on Thursday, July 23. For a sneak peek, check out this video teaser of Barack Obama and Joe Biden's conversation where the former colleagues get real about some big issues.

The teaser begins with a shot of Biden, the presumptive 2020 Democratic presidential nominee, stepping out of a car with a voiceover of him asking Obama a question, "Can you imagine standing up when you were president and saying, 'It's not my responsibility. I take no responsibility.' Literally. Literally." Obama's response comes as he gets out of a separate car, "Those words didn't come out of our mouths when we were in office."

The teaser shows them wearing masks to meet and then sitting down spaced far apart to participate in a conversation about the current issues America is facing. Presumably addressing the current pandemic and President Donald Trump's response, Biden talked about how he doesn't believe Trump understands the hardships people are going through during the coronavirus pandemic. "I don't understand his inability to get a sense of what people are going through. He can't relate in any way," Biden said.

Throughout the clip, Obama expanded on his endorsement of Biden and shared how he thinks Biden can help the country at this moment, thanks to his ability to relate to others' problems, which he called "the reason [he] wanted [Biden] to be [his] vice president."

Obama first endorsed Biden in a video message on April 14 in which he touted Biden's ability to lead the country during tough times. "Joe has the character and the experience to guide us through one of our darkest times and heal us through a long recovery," Obama said at the time.

The full video will be released to stream on July 23 on both Biden and Obama's social media platforms, and their full conversation apparently touches on how Biden plans to handle the coronavirus pandemic and the nation's economy if he's elected president. The two will also broach the subject of systemic racism in the United States and how the country can make a change for the better. This conversation comes as the United States has seen a surge in cases of COVID-19, the illness caused by the novel coronavirus. As of Thursday, July 22, 141,677 Americans have been killed by the virus. While dealing with the pandemic and a struggling economy, the United States has also begun to reckon with systemic racism as protests continue across the country and activists call for defunding the police and reinvesting in communities. With a presidential election less than four months away, this new campaign video will let voters hear a bit more from Biden on the subjects.