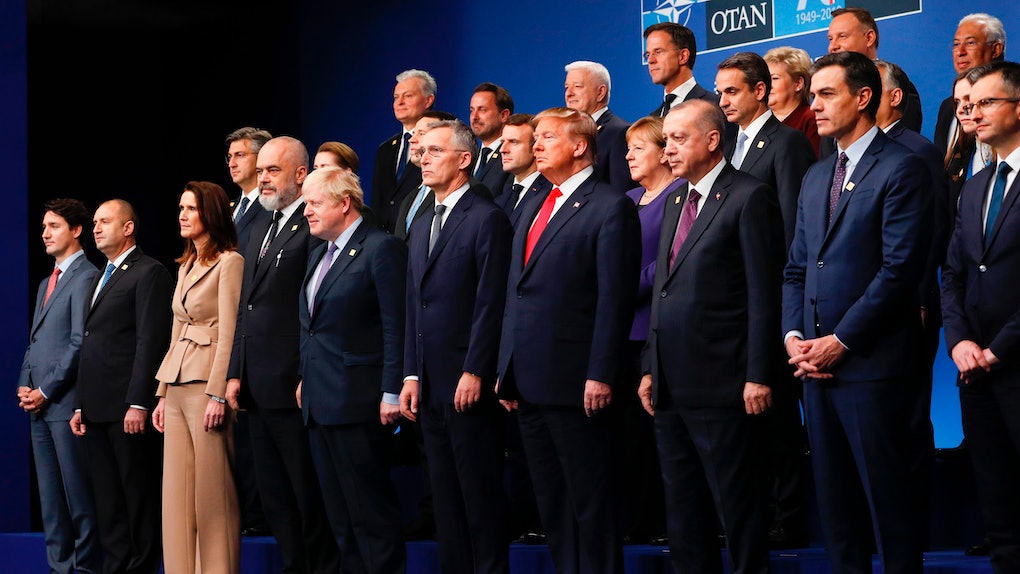 This Video Of World Leaders Apparently Mocking Trump Is So Awkward

World leaders descended on London this week for a NATO summit, but events did not all go as planned. On Wednesday, Dec. 4, a video of world leaders apparently mocking President Donald Trump during a reception at Buckingham Palace went viral, and it's a pretty awkward moment. The video was filmed on Dec. 3 and features prominent leaders including Canadian Prime Minister Justin Trudeau and British Prime Minister Boris Johnson.

In the short video, Johnson is heard asking French President Emmanuel Macron, "Is that why you were late?" Trudeau then jumped in, saying that Macron was late "because he takes a 40-minute — 40-minute press conference off the top." Macron responded while gesturing with his hands but his remarks were inaudible in the video. None of the leaders mentioned Trump by name, but according to BuzzFeed News, they appeared to be referring to a clash between Trump and Macron during a lengthy press conference the previous day. Following a cut in the video, Trudeau added, "you just watched his team's jaws drop to the floor." Dutch Prime Minister Mark Rutte and Princess Anne of the UK were also present during this discussion.

Macron, Trudeau, and Rutte did not immediately respond to requests for comment from Elite Daily, while Buckingham Palace declined to comment to Elite Daily regarding private conversations. But Trudeau did confirm in a closing press conference on Dec. 4 that he had indeed been talking about Trump. According to NBC News, Trudeau said his comment about watching "his team's jaws drop" referred to Trump's announcement on Dec. 3 that he would host the 2020 Group of Seven summit at Camp David. He also explained his press conference comments.

"Last night I made a reference to the fact that there was an unscheduled press conference before my meeting with President Trump and I was happy to take part of it but it was certainly notable," Trudeau said, "and I’ve had a number of good conversations with the president over the course of this day and yesterday."

Johnson, meanwhile, appeared to deny mocking Trump during a subsequent press conference. “That’s complete nonsense," Johnson said regarding the implication that he didn't take Trump seriously, per CNN. "I don’t know where that’s come from.”

Elite Daily did not immediately hear back from the White House about Trump's response to the video, but the president did not shy away from criticizing Trudeau after the video went viral. “Well, he’s two-faced,” Trump said of Trudeau, per NPR, before going on to add that "he's a nice guy."

“I find him to be a very nice guy," Trump said. "But, you know, the truth is that I called him out on the fact that he’s not paying 2% and I guess he’s not very happy about it.” Trump appeared to be referring to a press conference with Trudeau during which he clashed with the Canadian prime minister over defense spending. Trump and previous American presidents have argued that NATO members should spend at least 2% of their gross domestic product on defense, NPR reported, and Canada currently spends approximately 1.4% — a fact that did not please Trump.

Ever since Trump assumed the American presidency, there's been bad blood between him and other world leaders in the North Atlantic Treaty Organization, better known by its acronym, NATO. The organization is a multinational military and political alliance that includes many valuable U.S. allies, including France, Canada, Germany, and the UK. Nevertheless, Trump has broached the idea of withdrawing the United States from NATO on more than one occasion, and suggested that America's allies were not pulling their own financial and economic weight. At the same time, various heads of state have indicated they would not cave to his demands. Previous meetings between the allies have included some increasingly tense moments and troubling comments between Trump and other leaders of member nations.

Despite clarifications from Trudeau and Johnson, Trump's relationship with other world leaders at the NATO summit was tense at best. There was speculation that Johnson — the summit's host — was avoiding a meeting with Trump in order to evade bad press ahead of the Dec. 12 UK election, though Johnson later told reporters that he did in fact meet with Trump. Coupled with the fact that Trump is quite unpopular in the UK, it's unsurprising that a bit of drama unfolded during his latest visit there.