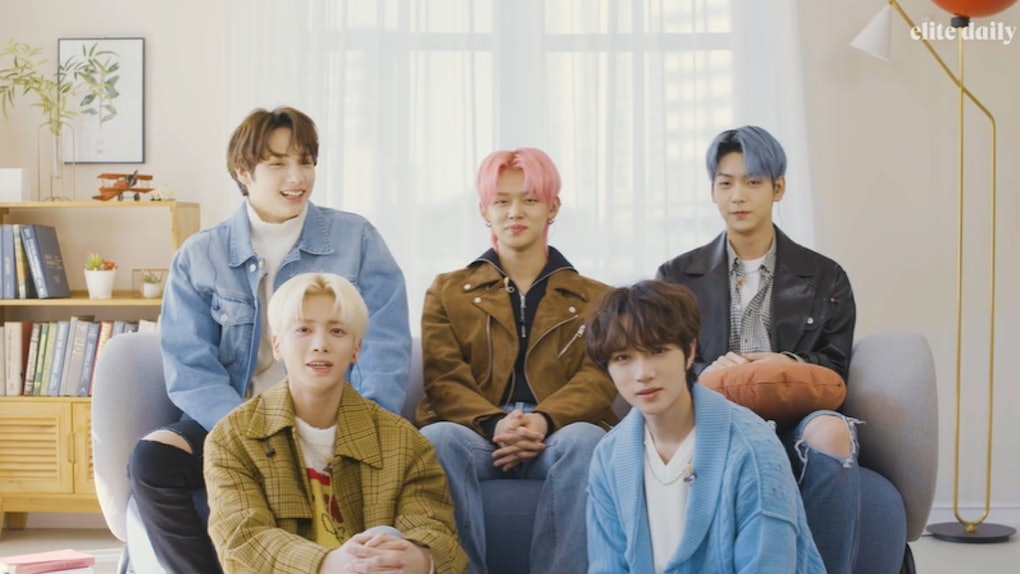 As TXT's popularity across the globe continues to rise with every one of their releases, fans can't get enough of their music, interviews, livestreams, and behind the scenes videos. MOAs devour every new piece of content trying to learn all there is to know about their faves. Over the past year and a half since TXT's March 2019 debut, fans feel like they've come to know the members and the ins and outs of their personalities so well. But SOOBIN, HUENINGKAI, BEOMGYU, YEONJUN, and TAEHYUN have pretty much spent every day together since they became a group, so no one knows them better than each other. Elite Daily's video of TXT quizzing each other about TXT is the ultimate friendship test and, the best part is, you can play along with them.

The first question on the lineup was what cover song TXT uploaded to SoundCloud first. While the rest of the guys seemed a bit stumped, YEONJUN knew the answer right away. (It was his cover, after all.) After they all agreed on the members who sing the highest notes on Minisode1: Blue Hour, the guys blew recalling the order they were introduced to fans before their debut out of the park (an impressive feat considering it happened so long ago). "It's too easy," HUENINGKAI told his members about the questions.

But he may have spoken too soon. Guessing each other's favorite songs on the EP, the drink SOOBIN was sipping in his first individual teaser video, and what message they wrote on HUENINGKAI's birthday cake ended up giving the boys a run for their money. "Whoa, way hard all of a sudden!" TAEHYUN mused.

You'll have to watch the video below to see how the boys did, and test your TXT knowledge along the way as well.

So, it turns out the guys had a tiny bit of trouble answering some of the trivia, but when it came down to talking about the message behind Minisode1: Blue Hour, TXT was of one accord. "It's our take on the many changes we've experienced this year, so we hope many people can relate to our story," YEONJUN explains to Elite Daily.

"I was going to say it in Korean, but you said it perfectly in English," TAEHYUN quipped, causing YEONJUN to laugh.

MOAs can listen to TXT's Minisode1: Blue Hour on all streaming platforms now.