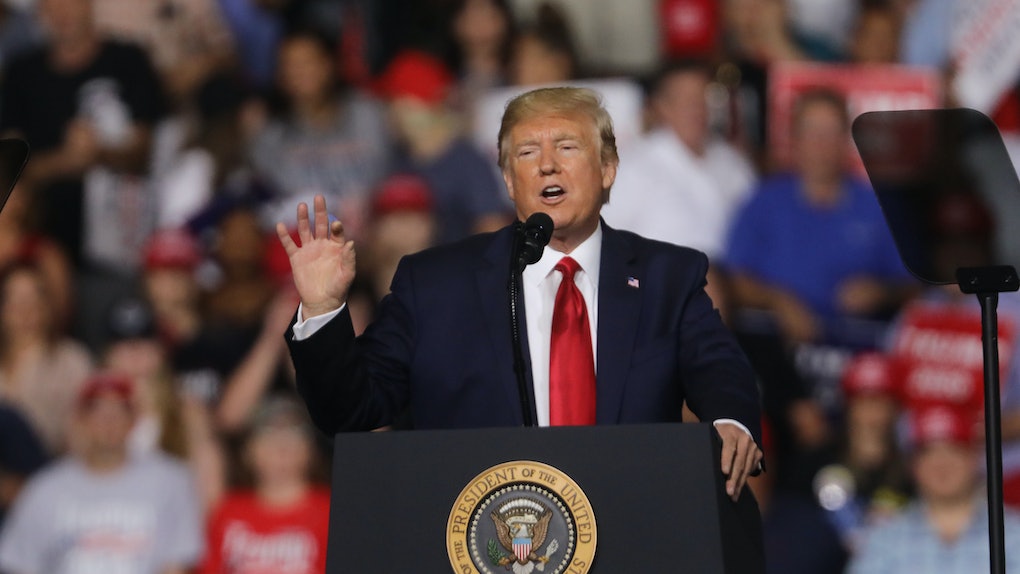 While nearly two dozen Democrats are traveling across the country to campaign for the presidency, President Donald Trump is campaigning, too — to stay in the White House for another four years. On Aug. 15, Trump held a campaign rally in New Hampshire, where he was briefly interrupted by a small group of protesters. As the protesters were led out of the building, Trump appeared to mock one of his own supporters for having a "serious weight problem," and this video of Trump fat-shaming someone at his rally has made waves on social media.

According to The Washington Post, it was initially unclear who Trump was trying to heckle. The Post reported that Trump turned to look behind him when he noticed that the crowd had gotten particularly riled up. Trump quickly noticed the group of protesters, and as security escorted them out of the rally venue, the president reportedly honed in on one of them.

“That guy’s got a serious weight problem,” Trump said, seemingly talking about one of the protesters. “Go home, start exercising.”

But according to the Associated Press, Trump actually mistook one of his own supporters for a protester. Bloomberg's Jennifer Jacobs tweeted that the president accidentally insulted a Trump supporter who had alerted security to the protesters' presence at the rally, and who was standing near them as they were escorted out of the venue. Fox News identified the man Trump insulted as Frank Dawson, a Trump fan who apparently wasn't bothered by the president's remarks, and reaffirmed his support for Trump. He reportedly told Fox & Friends after the rally that the president is "the best thing that ever happened to this country."

"Everything's good!" Dawson told Fox & Friends, adding that he wasn't upset about Trump's comments. "I love the guy!" Trump reportedly tried to speak to Dawson on the phone, per The Daily Beast. A senior administration official reportedly told Reuters that Trump was unable to reach Dawson but left him a voicemail.

But whether Trump fat-shamed a protester or a supporter, social media users were quick to criticize him for his comments. Many highlighted his comment as inappropriate.

The president has something of a history of mocking the physical appearance of attendees at his rallies, including protesters and members of the press. In 2015, Trump notoriously appeared to mock a New York Times reporter with a disability that impacted his ability to move his arms. Trump subsequently denied mocking the reporter, per NBC News, insisting that he didn't know what the reporter looked like or that he had a disability.

And throughout his 2016 presidential campaign, Trump routinely insulted women who disagreed with him. He once suggested that TV host Megyn Kelly had "blood coming out of her eyes, blood coming out of her wherever," and insulted fellow Republican candidate Carly Fiorina's face. Trump belatedly offered a defense of his comments about Kelly during a campaign rally in Oregon, saying that he loves and respects women. He added that he simply didn't finish his sentence, and that he was talking about Kelly's "ears or her nose." With regards to his remarks about Fiorina, Trump later told Fox & Friends that he was talking about "persona, I'm not talking not about looks."

Although Trump frequently defends his language, Mashable created a timeline of all the insults that Trump has hurled at people in the last few years, to illustrate what the president's campaign rhetoric often looks like. Trump has regularly heckled people who heckle him, as the Mashable timeline indicated, and often resorts to insults when his political opponents criticize him.

So, it seems like same old, same old, for Trump. At least this time there were apparently no hard feelings.