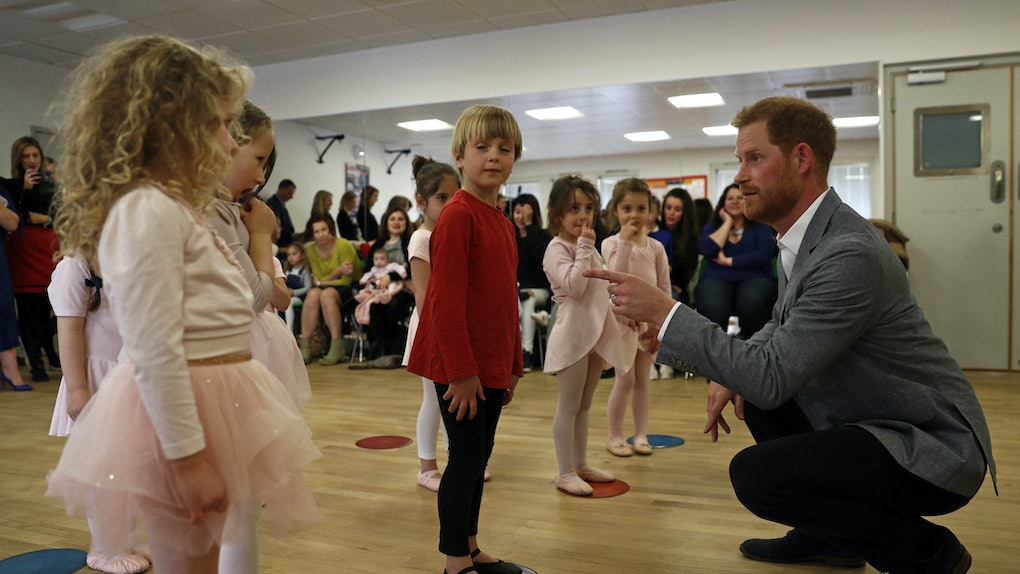 This Video Of Prince Harry Doing Ballet With Toddlers Is, Hands Down, The Cutest Thing Ever

Prince Harry is mere weeks away from becoming a first-time dad. Meghan Markle is reportedly going to be giving birth sometime in April or May, so it won't be long before they add "raising a royal baby" to their long list of responsibilities. In a public appearance on April 4, the Duke of Sussex met with some children, and the video of Prince Harry doing ballet with toddlers is quite literally the cutest thing I've seen all week. Get ready to swoon, people. Dad Harry is coming.

The Duke of Sussex made an appearance at the YMCA in West London on April 4. During the appearance (that Meghan didn't attend, but that's OK, she's busy growing a baby in her womb), Prince Harry spoke with the parents whose children were taking the ballet class, he spoke with a 3-month-old baby that smiled a big smile at him (yes, it was heckin' cute), and he watched the dancers in the ballet class show off the performance they had prepared for him and their parents.

The class showed Prince Harry two different dances followed by choreographed curtsies/bowing (which is called a reverence, for all of you who didn't grow up as a dancer like I did). When Prince Harry asked the only boy in class (we stan boys in ballet!) what his favorite part of the class is, the little guy responded, "The ballet challenge." Intrigued, Harry asked what the ballet challenge is, so the class showed him.

And it gave us this truly stupendous video.

The video shows the kids doing the ballet challenge — consisting of them putting the spots they were standing on atop their heads, and then balancing in passé — while Prince Harry tries to follow suit.

"Legs in the air!" the ballet teacher said, demonstrating what to do for Prince Harry and the children.

"Just one leg," the teacher laughed.

"You wobbled," one kid said to Prince Harry, reading him for filth.

After completing the ballet challenge, Prince Harry went around the room and met some of the parents.

That's when he spoke with this adorable little nugget, aka this 3-month-old baby.

The baby, named Naz (heckin' adorable name), gave a big smile when Prince Harry was talking to her and her mom.

"Uh... sometimes," the mom replied. Someone get this mom a nanny so she can sleep while her baby isn't!

All in all, this was an excellent Prince Harry appearance. Another excellent royal happening is Harry and Meghan's new Instagram!

“Welcome to our official Instagram," the caption in their first post read. "We look forward to sharing the work that drives us, the causes we support, important announcements, and the opportunity to shine a light on key issues. We thank you for your support, and welcome you to @sussexroyal. — Harry & Meghan."

He also met with teens at the YMCA to talk about mental health, noting in his comments that the social stigma around talking about it has improved in recent years.

The post also showed the picture of baby Naz smiling at Harry. A+ baby content. Keep it coming, England.