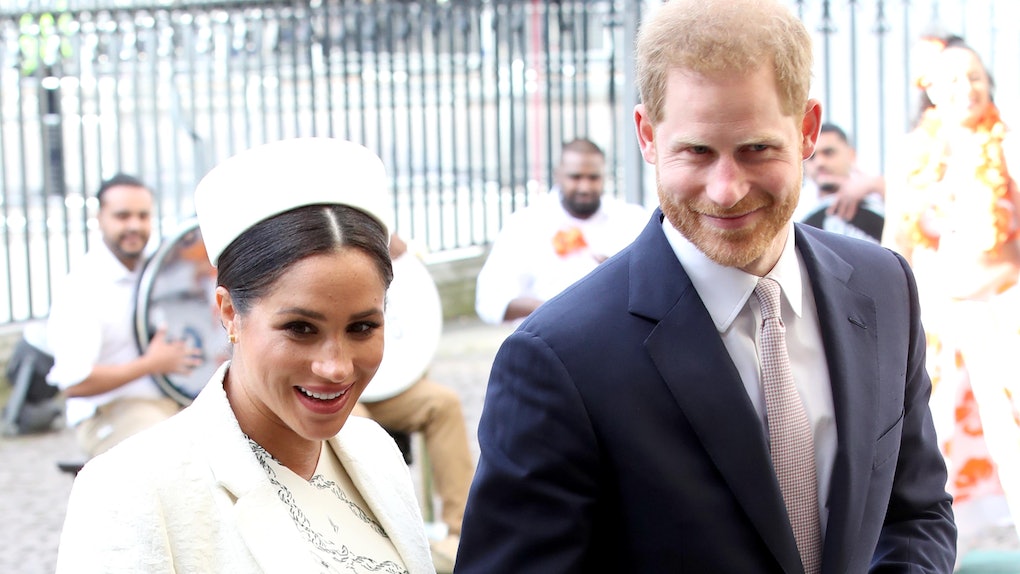 This is not a drill, you guys! Everyone, phones out! The Duke and Duchess of Sussex just received their very own Instagram account which is, by every standard, a miracle. Prince Harry and Meghan Markle's new Instagram account is seriously what the world needed and you need to hit "follow" right now. As of publication, the account has been live for two hours, which means you are at least two hours behind following Meghan and Harry — like, the Meghan and Harry — on social media! Where have you been?!

If you're thinking this is going to be like your other favorite celebrity Instagram accounts where you see behind-the-scenes moments from their day-to-day lives, I hate to break it to you, but no. This is a special, magical place where the parents-to-be can update their followers on their work endeavors, royal happenings, and other "official" stuff. But, still. How 21st century of Kensington Palace!

The account's handle is @sussexroyal and, so far, there is one carousel of photos posted from Harry and Meghan's relationship history. The caption reads:

Welcome to our official Instagram; we look forward to sharing the work that drives us, the causes we support, important announcements, and the opportunity to shine a light on key issues. We thank you for your support, and welcome you to @sussexroyal.”- Harry & Meghan

In my dream scenario, Prince Harry goes live on their stories while Meghan's in labor, but then again, maybe I'm being flagged somewhere on the royal security system for even suggesting such a thing.

In reality, this will probably work a lot like Kensington Palace's official Twitter account where fans receive headline news and official photos taken by credentialed and screened photographers. (Fingers crossed for the occasional selfie!)

In fact, Kensington Palace tweeted about the new Instagram account welcoming the Duke and Duchess of Sussex to the 'gram.

It's worth noting the Duke and Duchess of Cambridge, Prince William and Kate Middleton, have not established a @cambridgeroyal Instagram account. That's because they'll be taking over as the sole focal point of the @KensingtonRoyal Instagram starting today.

Diana Pearl, a reporter with a long history of covering the Royals, notes this emphasizes the splitting of the royal households.

As she puts it, "This Instagram news makes the splitting of the households feel so REAL, even more real than when the official announcement came out. Like seeing this on KP's page feels so... WEIRD!!!"

One fan asked Pearl a fair question, wondering if this is Kensington Palace's way of trying to remove the responsibility of sharing Harry and Meghan's news. As Pearl explains, she thinks it's more just a formality.

As of publication, @SussexRoyal only follows 22 other accounts which are predominantly made up of royal charities and organizations of interest. Of course, @KensingtonPalace and @TheRoyalFamily made the cut as well.

It will be interesting to see the kind of content the account generates and how often! Are we talking, like, once a day? Morning, noon, and night? What kind of filters are on the table? Will Prince Harry be appearing with a puppy-ears filter?

Only time will tell. I can't wait.