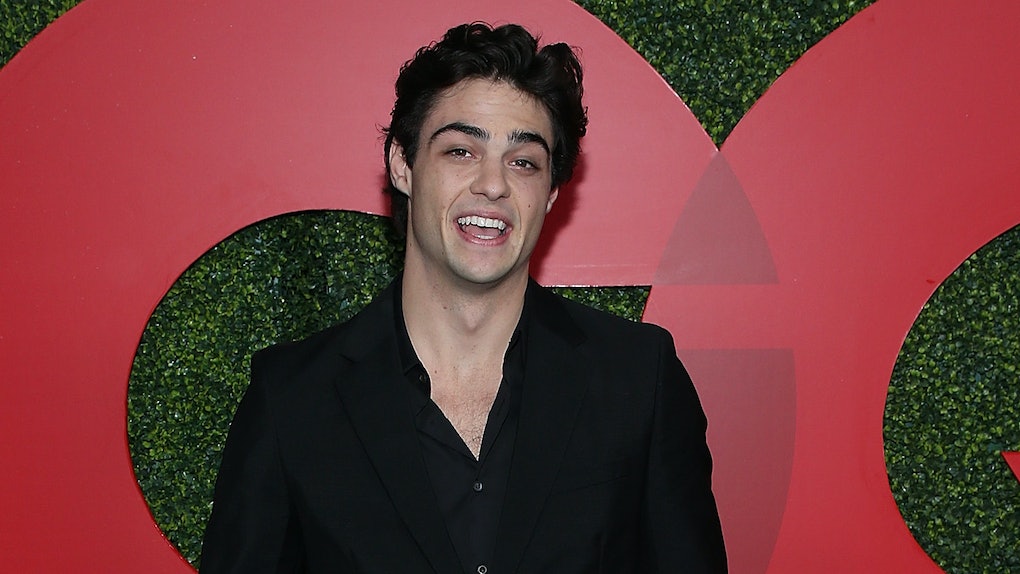 If you don't dream of To All The Boys I've Loved Before actor Noah Centineo at least once a week, then I don't know if we can be friends. After becoming something of an overnight celebrity from playing TATBILB's lead heartthrob, Peter Kavinsky, the more we found out about Centineo, the harder we fell in love with him. And guess what? Now there's yet another reason for you to crush on the heartthrob, and it's all because of this video of Noah Centineo singing Justin Bieber's "Boyfriend" from years and years ago. The uncovered footage from 2012 features Centineo, actor Jack Griffo, and superhero capes, so you're going to want to stick around here for a while, folks.

According to Cosmopolitan, some fans unearthed some buried treasure on YouTube involving a 16-year-old Noah Centineo, passionate lip-syncing, and some epic dance moves. Here's what goes down: a young-looking Centineo and Griffo appear on screen in what looks like a candlelit room wearing Batman and Superman costumes for seemingly no reason at all. "Boyfriend" by Justin Bieber starts playing, and the two actors look at each other and nod, like they know what's good. Then, the two start something that can only be described as a very rehearsed dance, and, if I'm being honest, they aren't actually that bad at it.

But don't think that this video just shows off their ~moves~ in the comfort of someone's home. Oh, no, no. The two actors end up on the streets of Burbank, California, dancing and showing off their capes as cars pass by. And, while the video's description says that "Jack Griffo & Noah Centineo roll to dinner in Burbank," we never actually see them eating dinner, but, you know, just try to picture what it would look like.

Check out the video below in all of its glory:

Is it weird that I'm still swooning over Noah Centineo in this video? I feel like that's something I should probably keep to myself, but that's just too damn bad.

If you're like me and will take Noah Centineo footage in whatever form it comes in, prepare yourself, because The Hollywood Reporter announced that a multi-picture deal was reached between Netflix and Paramount Pictures (the producers of To All The Boys I've Loved Before) with Viacom CEO, Bob Bakish, confirming that a sequel to To All The Boys I've Loved Before is happening (the jury is still out on the sequel's name, but I'm putting my money on P.S. I Still Love You, the title of the second book in Jenny Han's original book series that the movies are based on).

Let me repeat that one more time: THERE WILL BE A TATBILB SEQUEL, EVERYONE!

Obviously, the biggest question now is: Will Noah Centineo be in the TATBILB sequel?

While we don't know anything concrete, it seems like so long as the actor's schedules aren't conflicting, Centineo's Peter Kavinsky will be there to make Lara Jean swoon once more. Plus, Centineo previously told People that he'd love to be a part of a sequel for the movie, so it seems like he'd be willing to make sure he's available. He told the magazine, "I would love to do a sequel... One, just because it’s such a great story and it needs to be finished. The story has to be told... I can’t wait to see everybody and hang out again."

Well, Noah, we'd love to see you on screen once more, gazing intensely at the camera while wearing nothing but a robe.

Fingers crossed for a sequel that gives us more of what we truly want. Looking at you, scantily clad Kavinsky.

More like this
Justin Bieber's Response To Criticism For Including An MLK Speech On 'Justice' Is Open-Minded
By Brandy Robidoux
I Tried Singing While Running Like Miley Cyrus & OMG, My Lungs
By Rachel Varina
Justin Bieber's Quote About His First Year Of Marriage To Hailey Baldwin Is Unexpected
By Corinne Sullivan
Stay up to date