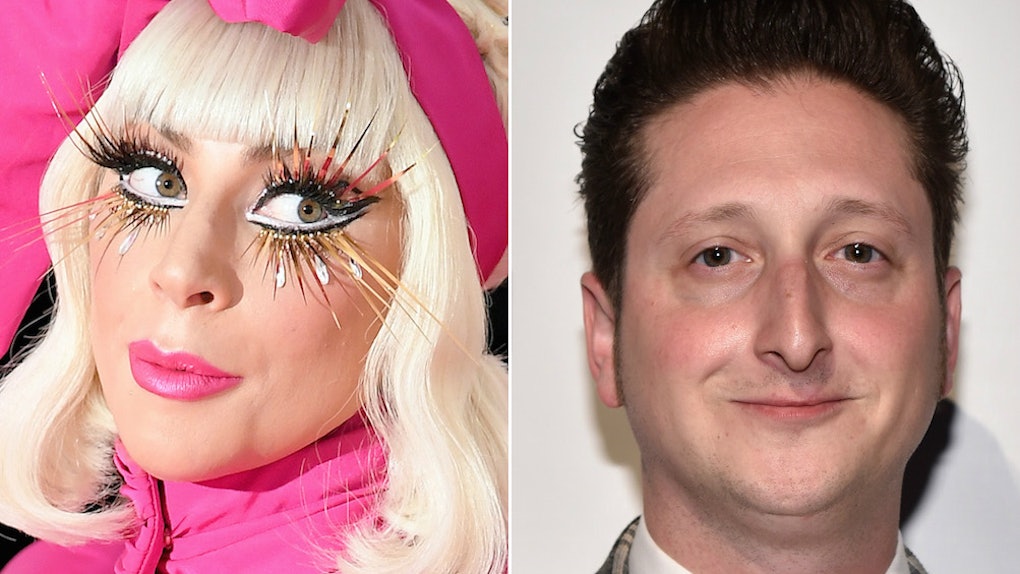 Lady Gaga has tussled some feathers on Twitter. The Oscar winner (y'all don't know how much joy typing that brings me!) is currently coasting through her Las Vegas residency. Since returning to Vegas following a successful awards season, Gaga has made a bit of a habit of strolling into her good pal Brian Newman's late-night jazz show to perform with him. Gaga has been close with the trumpet player so long that they basically consider themselves family. But a new video of Lady Gaga kissing Brian Newman has people on Twitter saying she needs to chill. Basically, people are tying this into the rumors that Gaga was possibly a reason behind Bradley Cooper and Irina Shayk's breakup, but it just ain't that deep.

Here's what went down: After one of her Enigma shows, Gaga traipsed over to Brian Newman's jazz show (it's got a burlesque vibe to it) to perform. This wasn't her first time doing this, but it was the first time she kissed Newman on stage during this little impromptu performance of hers. That kiss is what has people criticizing her. They felt that, given the fact that Newman is married and Gaga is his daughter's godmother, the kiss shouldn't have happened. They felt Gaga should've practiced restraint. But watching the video, it's clear how harmless this kiss is. And it was prompted by the song lyrics Gaga sang just seconds before the kiss happened.

In a video captured by an audience member, Gaga and Newman are performing together when Gaga sings the line, "Darling, kiss me," while looking at Newman. She leans in for a kiss, he goes for it too, it's quick and sweet, and that's that.

It was part of the performance, no doubt, but some people on Twitter think Gaga shouldn't have leaned in for the kiss.

Others knew it was all an act.

Also, it's 2019. Why do we need to care about a quick kiss between two best friends? Especially when they're performing, and it was directly following a line that literally asked for a kiss? It's called narrative, people! Gaga gave me drama. She gave me commitment. She gave me live theater. I don't hate this!

Naturally, this is going to make people think about Bradley Cooper, who is no longer in a relationship with Irina Shayk (and, somehow, this involves Lady Gaga because they starred in a romantic movie together, apparently). But this is not the new Brangelina, so take a seat on that thought, if you're having it. Gaga is not making it her life's mission to break up longterm relationships. She didn't break up Cooper and Shayk, and she's not breaking up Brian Newman's marriage now. There was truly nothing to see here with this kiss other than two friends putting on a show.

A source told Us Weekly that the kiss really meant nothing, and that the kiss was all performance art. "There is nothing to see here. Gaga is a performer, and it was a playful, harmless part of her act," they said. "She and Brian have had an incredible friendship for years and see each other as family.”

Y'all, she's just being Gaga. Newman knows that, we know that, she knows we know that. Cut, print, moving on.