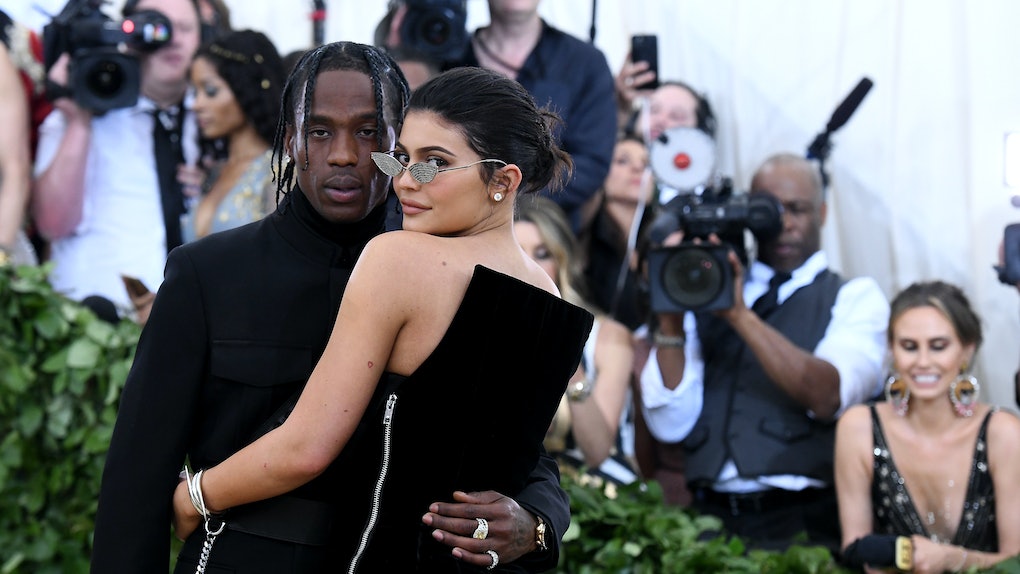 It's no secret the Kardashian-Jenners are an entertaining bunch, but a recent video of Kylie's latest birthday gift to Travis Scott is especially captivating. Recently, the lip kit queen gave her rapper boyfriend a very special — and very permanent — present on his birthday. Seriously, this video of Kylie Jenner tattooing Travis Scott on his birthday is really something else.

On Saturday, May 4, per People, Instagram user and tattoo artist @jonboytattoo posted a video of Kylie Jenner wearing black gloves and holding a tattoo gun. Her client? None other than her partner and father to their daughter together, Travis Scott, who was celebrating turning 28 at his "gas station" themed birthday bash.

Anyway, in the Insta video Scott's arm is extended toward Kylie as she marks his skin up with her gun. Though the camera can't see what Kylie is tattooing on Scott, viewers do hear her scream from excitement (or maybe nervousness) at one point. I don't know about you, but if my tattoo artist screamed, I'd freak out a little. But not Scott. He continues sitting on his chair, cool, calm, and collected, as Kylie goes back in to finish up the spot she's working on. The photo was captioned:

Maybe it indicates the tattoo has something to do with their relationship, perhaps it even looks similar to the caption? Fans are still waiting to see the final product.

Surprisingly enough, Scott's tattoo wasn't the only permanent ink of the night. Kylie also got inked at the "tattoo station" as shown in an Instagram video from account @kylieclips. In the video, it appears that the back of Kylie's arm is being tattooed, and she looks pretty calm considering that a needle is piercing her skin. At one point, she even playfully stuck her tongue out. Since both Kylie and Scott got tatted at his birthday, there's a very good chance they either got matching tats, tats that feature each other, or tats celebrating their daughter Stormi. TBH, I'm here for any of those.

On Scott's actual birthday — Tuesday, April 30 — Kylie posted a heartfelt Instagram post celebrating her time with Scott. There were five pictures in the post showcasing the two of them together, Scott with Stormi, and all three of them posing as a family. In the caption, she wrote,

watching you evolve into the partner, friend, son, and father you are today has been so fulfilling ♥️ my real life bestie & hubby all wrapped into one. i love you and I’m so so proud of you. happy happy birthday 🎉🎁 let’s f*ck around and have another baby. 🤪

Scott responded to the post, writing "I love u mama/Wifey. We shall rage 4ever." Winnie Harlow, Hailey Bieber, Kim Kardashian, and Kourtney Kardashian all joined in on wishing Scott a happy birthday in the caption as well. Kylie also recently posted a throwback of her and Scott at the 2018 Met Gala, where they both rocked a sleek futuristic look in all black. And if you want to make a case for these two possibly having new twinning tattoos, look no further than their Avengers: Endgame costumes they shared in honor of the film's release in April.

Whether these two are hanging out with Stormi, making cosplay look hot AF, or being adventurous enough to give one another tattoos, it's pretty clear they're having a lot of fun and good times doing it — and that's honestly all that matters!