Kristen Bell and Dax Shepard are madly in love with each other. And if you didn’t know that before, then you definitely will by the time you’re finished reading this. The couple appeared on The Ellen Show for Shepard’s birthday and made everyone in the audience swoon over how head-over-heels they are for each other. In a video from the show, the couple share an emotional moment that seemed to resonate with audience members and viewers alike. And I think it’ll probably make you emotional, too! The video of Kristen Bell and Dax Shepard making each other cry on The Ellen Show will definitely make your eyes just a little watery.

In a segment that Ellen DeGeneres called “Ask Dr. Dax,” audience members got to stand and ask Shepard a question. One such question came from Bell herself who was sitting in the audience. Since it was Shepard’s birthday, Bell asked him a birthday-related question!

Amused, Shepard responded with, "In the bedroom?” which garnered some laughs from the audience.

But that didn’t sway Bell at all. "Umm, let’s say I have 'in the bedroom' covered,” she said without missing a beat.

And that was when Shepard got all emotional. He paused to think about his response and ultimately ended up saying, "I would say please, please, please give that person love and support for 11 years, give them two beautiful baby girls, and you’re good.”

Bell also shed a few tears as Shepard said this. "You’re crying too!” she said to him.

Of course, Shepard resorted to some humor to lighten up the moment. "You sit down, young lady. We’ve heard enough of your questions.”

It was a really sweet moment and one that showed just how committed Shepard and Bell are to each other. You can check out the video of Bell and Shepard making each other cry here. 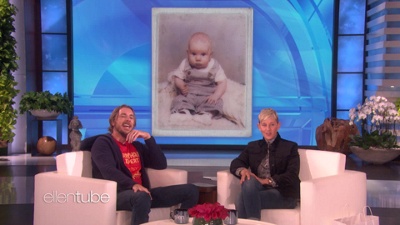 This incredible display of mutual love and respect comes just weeks after Shepard addressed rumors that he had cheated on Bell back in 2009.

A day after the Daily Mail’s report was published, Shepard took aim at the publication in an Instagram post.

“Hey Daily Mail, that photo is 13 years old, not 9,” Shepard said of photos of he and Edwards kissing. “Also, Kayti has sold stories to tabloids about Matthew Perry, Jack Osbourne, Kid Rock, and now me. I look forward to her next one. Fingers crossed it’s about my #1, Brad Pitt :).”

Needless to say, Shepard is willing to fight for his reputation and his marriage. And it’s beyond obvious that he loves Bell to pieces.