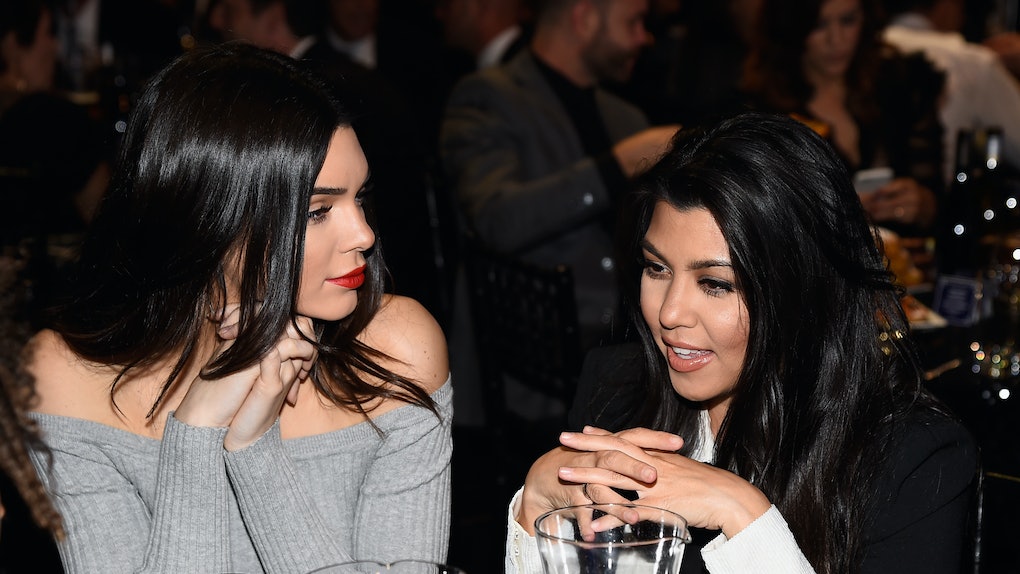 Say what you will about the Kardashian fam, but I will forever stan every single one of them because they always keep it real. On Sunday’s episode of Keeping Up With The Kardashians, for example, shiz got super real between two of the sisters during a ski trip to Mammoth, California. Have you seen the video of Kourtney Kardashian and Kendall Jenner physically fighting? Because that is some peak sibling rivalry right there, and it's totally relatable.

OK, so the physical part of the fight was actually staged in order to teach a lesson to another sister — one Miss Khloé Kardashian. But I'll get to that in a minute. Because Kendall and Kourtney did actually have a major (non-physical) brawl during the ep, and the whole thing started when Kourt decided to tag along with Kendall and her friends on the ski trip. Which is totally something my younger brother would do. Anyhoo, when Kourt then decided to start cracking jokes at her younger sister's expense, Kenny wasn't here for it. She later told Khlo all about it, and things just basically unraveled from there.

"You know, Kourtney and I have been getting a bit closer over the past couple of years and I love that she hangs out with me and my friends," Kendall explained once she returned to Los Angeles after the trip. "But to be honest, I felt like there were just some moments where she was a bit rude and it really started to get to me at a certain point."

"A lot of the trip, people were picking on me, and by people I mean Kourtney, most of the time," she continued. "Whether she thought she was joking, I didn’t really think it was a joke. I just felt like she was trying to be cool in front of my friends and like, younger people that are cool, at my expense. She was, like putting me down to make herself feel higher."

Ugh, siblings. Khloé immediately took Kendall's side, and decided to hit up Kourtney in order to confront her for “bullying” Kendall. As you can imagine, that confrontation didn't go over very well.

“I definitely think it was unfair for Kendall to say that I was bullying her," Kourtney told Khloé. "We were just having a good time. She’s just way more uptight than I thought because I wasn’t trying to make fun of her at all. It’s just my personality to make jokes."

That's actually kind of true. Kourtney tends to be the "Chandler" of the crew, although TBH, sometimes her jokes do seem to have an angry edge to them. Which is why Khloé really didn’t know who to believe. So she kept going back and forth between her two sisters, before she finally invited Kendall over to Kourtney’s to try to get to the bottom of things.

"I’m not going to let this tension between Kourtney and Kendall linger on and drag out," Khloé explained. "They just need a little kumbaya moment."

Instead, things took a turn after this exchange:

Yup, that happened. Which led to Kendall making a hasty exit. Kourtney then started turning all her frustration toward the other sister.

"I know that Khloé is trying to be helpful, but it’s not helpful," she explained in a confessional. "I told her all this stuff in confidence and for her to go tell Kendall exactly what I’m saying to her, it’s only going to make the situation worse."

Eventually, Kourtney and Kendall worked things out on their own. And because no good deed goes unpunished, they then decided to orchestrate a fake fight in order to teach KoKo a lesson.

"We came to the conclusion that Khloé made this a little bit worse than it needed to be, so we decided to stage a little fight to annoy and freak her out a bit for getting into our business," Kendall explained.