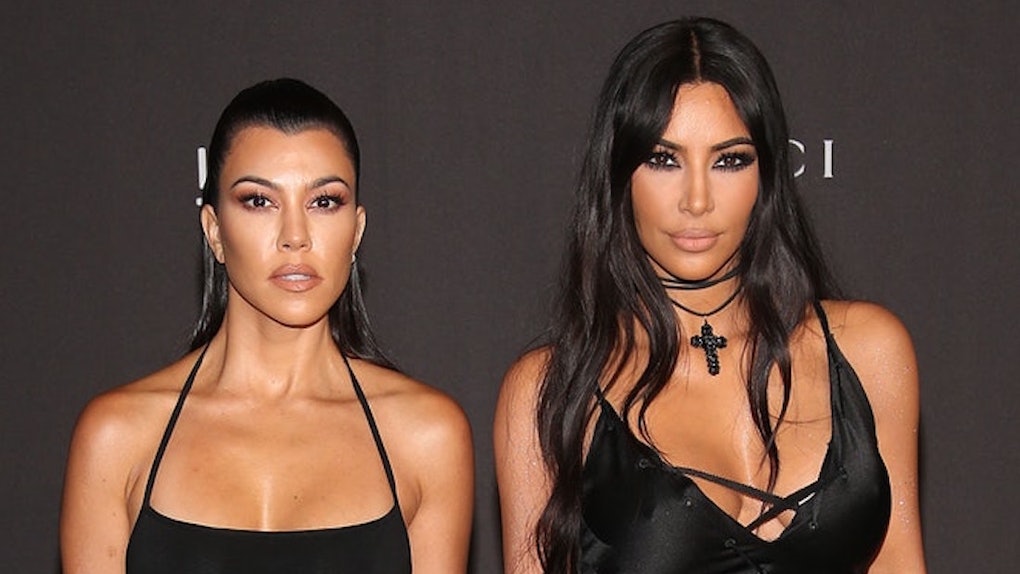 Another season of Keeping Up With The Kardashians, another fight between Kim and Kourtney. In a new episode of KUWTK, the two eldest Kardashian siblings had it out over fashion. And the video of Kim Kardashian accusing Kourtney of copying her style is pretty tense, although not nearly as bad as the fight they got into in Season 16 when Kim called her older sister the "least interesting to look at" member of the family.

The episode was filmed during preparations for Kourtney's 40th birthday party and the 2019 Met Gala. The drama started out with Kourtney asking Kim to help her choose a look for her party, and Kim, ever opinionated, was blunt and abrasive in the delivery of her thoughts. "Ugly" was a commonly used word. Suffice it to say, tensions were high when Kim FaceTimed Kourtney later in the episode to show her the blue and crystal Mugler dress she planned to wear to the Met Gala after-party.

Not knowing the Mugler team was in the room for the fitting while Kim FaceTimed her sister, Kourtney teased Kim, saying the dress and corresponding blue and crystal wig looked like a Halloween costume. This confused Mugler's manager, given that he had received an email from Kourtney's stylist previously praising Mugler's work and asking for samples for Kourtney to try. That's when Kim's stylist revealed that Kourtney's stylist had taken some Rick Owens samples of a custom-made dress for Kim from the Rick Owens store. To put it lightly, that pissed Kim off. So the next time Kourtney FaceTimed her to ask about a potential party look, Kim accused Kourtney of copying her style.

Just watch the video and see for yourself.

Kourtney defended herself when Kim first accused her of copying her style. When Kim first picked up the phone, Khloé (who was with Kourtney at the time), said, “She wants me to call Kendall [Jenner] because she doesn’t care about you and I." It's true. Kourtney did say she'd rather call Jenner because of the harsh words Kim used when she was at Kourtney's fitting previously.

“Well if she doesn’t care why do you keep on picking out all the same clothes?” Kim shot back.

“I don’t know what you’re talking about. I’ve never dressed like you. I dress completely different than Kim,” Kourtney responded.

In a solo interview, Kim said the issue was more about Kourtney seemingly trying to encroach on her personal relationships with fashion designers than it was Kourtney copying her looks.

“I don’t think Kourtney understands the legwork behind this. I don’t think anybody understands. You have to really have a relationship with that designer. She has no idea how this works,” Kim said.

“We have completely different looks. I’m not trying to copy your style. But on a same designer, you can’t ban me from [them],” Kourtney said of Rick Owens, a brand of which she notes she mainly wears the men's line.

“They said, ‘Sorry, Kourtney’s stylist pulled everything,'" Kim said back, clearly agitated. Kourtney then defended herself by saying she doesn't know what her stylist pulls for her, but she will reject things she pulls if it feels too similar to something she's seen her sisters wear.

“So ask me! Are you wearing this white Rick Owens dress? I want it. She pulls things and when it comes here, I say, ‘No, no, no. Yes, yes, yes,'” Kourtney said.

This fight ended up spanning days, with Kim and Kourtney telling different stories to Kris Jenner and Khloé Kardashian, respectively. They read aloud the nasty texts they sent each other, Kim called Kourtney a "fake humanitarian ho" to Jenner, and Kourtney cried in the car on the way to an event honoring the late Robert Kardashian. It's another intense fight between the two sisters for the books, and another moment where Kim showed her teeth in a super unnecessary way, in my opinion.