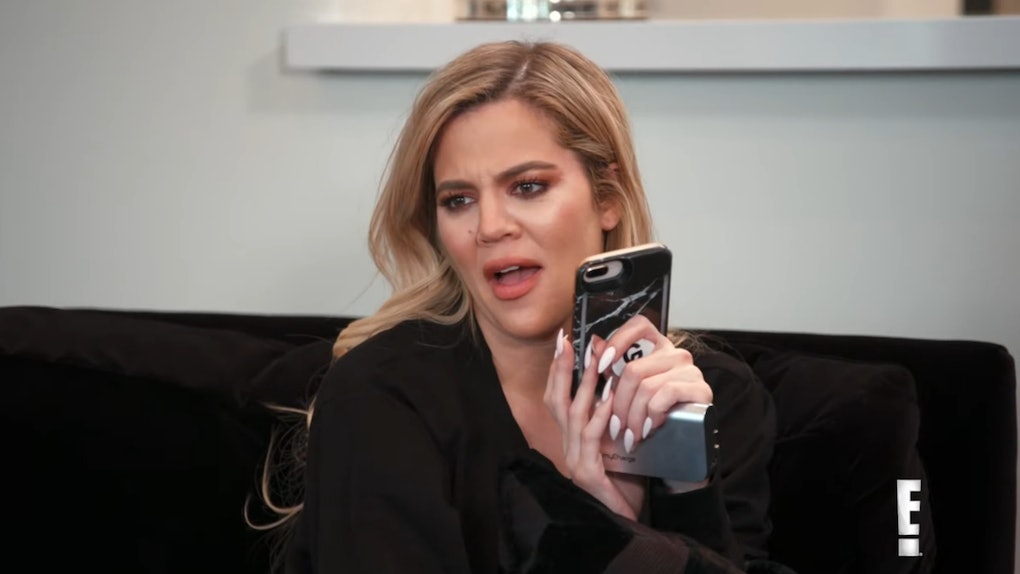 When I was a kid, I'd ask my aunt to go to the movies or the mall, you know, typical normal people things, but the Kardashians aren't normal people — they're the Kardashians. So when North West, daughter of Kim Kardashian and Kanye West, wanted to go for a limo ride, all she had to do was call up her aunt Khloé Kardashian and boom, wish granted. Yup, it was really that easy, no begging or crying involved whatsoever. The video of Khloe Kardashian agreeing to take North on a limo ride will have you feeling so jealous of a six-year-old.

In a new clip of Keeping Up With the Kardashians, Khloé Kardashian gets a phone call from her mother Kris Jenner, who surprises her and her friend Malika Haqq with a trip to Palm Springs. Khloé admits that she's busy, since she's planning a week-long trip to Cleveland with her daughter True Thompson, so the trip to the desert will have to be that weekend. Oh, if only my schedule looked like that. Right after Khloé ended the call with her mom, Kim called her up to not-so-subtly ask her for a favor. Kim asked Khloé, "Do you know that North is dying to go in a limo? If there's any way we could get a limo just for the day…"

I would have been like, "Yeah, and what about it?" I'm sure Kim Kardashian has enough money to rent out, scratch that — buy a hundred limos, so why go to Khloé for help? That woman is pretty occupied at that moment, excuse you. But being the generous aunt that she is, Khloé agreed to take North for her dream limo ride the very next day, which was so aunty of her to do. I mean, when your parents say no, you ask your aunts and uncles next, right? They can't possibly say no, and when you're aunt is Khloé, one of the richest women in America, there really is no excuse. A limo ride? That's nothing. Khloé can make it happen like magic and she knows it. "Basically, I'm Mary f**king Poppins," she said.

Since Khloé agreed to the limo ride so quickly, Kim tried to see if her sister would be willing to do one other favor for her — take North to a spider exhibit. But that is where Mary Poppins' magic ends, sadly, because Khloé was totally grossed out by the thought of it. She said, "Okay, I am not going to a spider exhibit, sorry North." So, unfortunately, no spiders for North West, but she does get a limo ride, so I'm sure she'll be fine.

Watch the hilarious exchange happen below.

Oh, how I love watching Keeping Up With the Kardashians. Limo rides and spontaneous trips to the desert? Yeah, it must be pretty good to be a Kardashian, but you know what's even better? Being a kid of the Kardashian family, because no one could say no to you, right?

More like this
Kanye West's New Netflix Docuseries Sounds Epic, But Will It Feature Kim Kardashian?
By Brandy Robidoux
Rosé From BLACKPINK's "Gone" Music Video Is The Ultimate Sad-Girl Aesthetic
By Abby Monteil
What Does Taylor Swift's Vault Door Video Mean? Fans Are Decoding It
By Cianna Garrison
Stay up to date