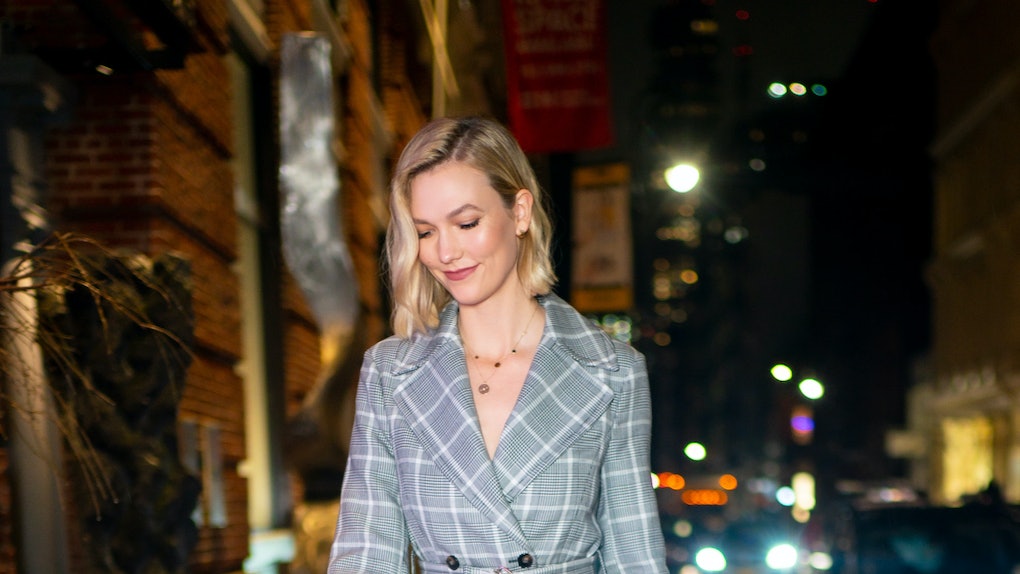 On this week's episode of Project Runway, things got awkward when a contestant appeared to make a pointed jab at Karlie Kloss' ties to the Kushner family. Prior to being eliminated, Tyler Neaslonley made a dig at the model, who is married to Joshua Kushner, when his design was being reviewed — and it was such an awkward moment. Prepare yourself, because this video of Karlie Kloss being shaded on Project Runway will definitely make you cringe.

On Thursday night's episode, Neaslonley was was one of many contestants asked to dress Kloss for a Council of Fashion Designers of America event in Paris. Their challenge? Use only donated clothing from a Goodwill store to come up with with a cutting-edge design. Neaslonley's take on the design wasn't too popular with the judges, and he landed in the bottom after revealing his look on the runway.

"It’s made from four pairs of pants. I was going for a very traditional Montauk, Martha’s Vineyard, Cape Cod, Americana vibe," he said. Neasloney continued, “It was inspired by a tuxedo ruffle. I’m happy with the construction."

When one of the judges challenged how Neasloney's design followed the criteria of being super cool, wearable, and chic, the designer couldn't resist shading Kloss's familial connections.

"It’s definitely ‘wearable’ in some place that is neither Paris nor Montauk or Martha’s Vineyard. I cannot see Karlie wearing it anywhere, honestly," the judge said.

Neasloney fired back, "Not even to dinner with the Kushners?"

He added to Kloss, who looked visibly shocked by the comment, "That’s your husband!"

After his comment, the model fired back saying, “I was going to Paris, that was your challenge here. Keep it to the challenge.”

She continued, "You may not know, but I know, this is not what I asked for. The fabrics are poor choices. I think they look cheap. The pockets are ill-placed. And if this is your aesthetic, then that’s that. But this is about my aesthetic and the influence of my stylist. You really missed the mark here on all accounts."

Following the episode airing, Neasloney said that he felt "misunderstood" and that his comment had been taken out of context.

In an interview with The Daily Dish, he explained "So, I came into the Episode 4 runway after being in the bottom twice before that in a row, I came in there being like I’m friendly with the judges now. We’ve spoken, we’ve kikied, we’ve laughed. I can be my normal self."

He added, "I'm not a nasty person. I thought we were on a friendly enough playing field. So Karlie, at the end of the day, she’s human, so I don’t want her to just hate me or feel awful about what I said."

"That’s what is bothersome about some of the coverage, both press and Twitter, is a lot of people are treating it as this non sequitur," he said. "It was not a non sequitur; it was entirely related to the aesthetic of the look."

While Kloss didn't acknowledge the dig at her in-laws, it sounds like she took the comment gracefully and didn't let that get in the way of her critique.