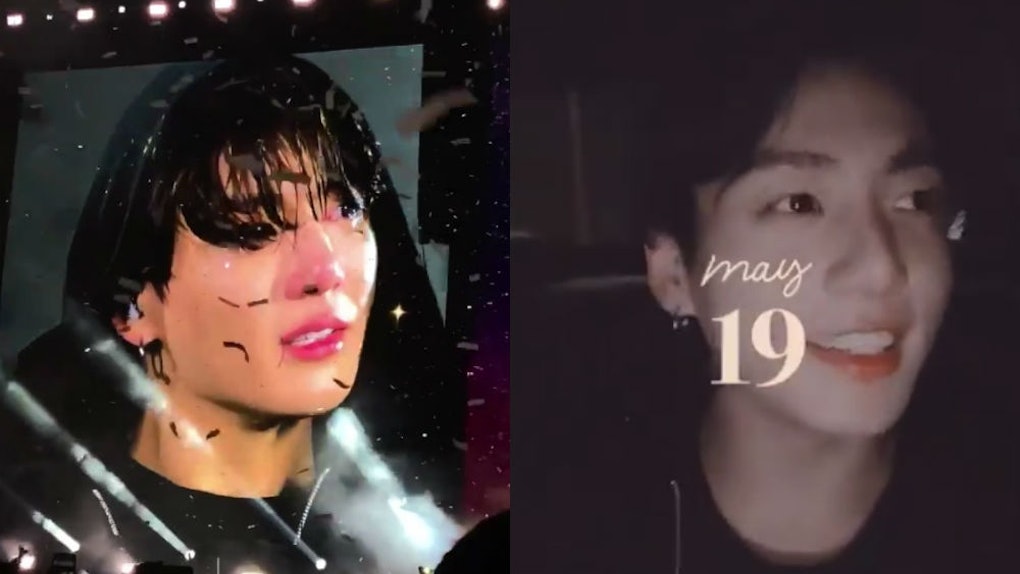 This Video Of Jungkook Crying At BTS' Last U.S. 'Speak Yourself' Concert Will Break You

Were you one of the lucky ARMYs in the house at MetLife Stadium in East Rutherford, New Jersey on May 19? It was BTS' final U.S. stop on their record-setting Love Yourself: Speak Yourself tour, so emotions were running high, y'all! Can't say I'm surprised — I mean, the seven-member crew is the first-ever K-Pop group to take on a stadium world tour, so it only makes sense that they got super emo when they closed it out in the U.S. of A. There was just so much love and energy in the air as the crowd waved their Bangtan Bombs and watched RM, Suga, J-Hope, Jin, Jimin, V, and Jungkook make history during their nearly-three-hour performance. Speaking of Kookie, if you haven't seen this video of Jungkook crying at BTS' last U.S. 'Speak Yourself' concert yet, trust me when I tell you that it will have you all up in your feelings.

It's been a big month for BTS. They won two Billboard Music Awards on May 1 — one for Top Social Artist and one for Top Duo/Group. Just a few days after their big win, they performed their first sold-out U.S. show in Los Angeles on May 4 at Rose Bowl stadium, then proceeded to put on five more shows in L.A., Chicago, and New Jersey over the course of the next 14 days.

Pretty impressive, right? So you can understand why Jungkook would be all up in his feelings about it coming to an end — at least on this side of the pond (the boys still have a bunch of June and July tour dates ahead in the UK, Brazil, France, and Japan).

Anyway, here's the video of Jungkook crying at the end of the show:

Hear that sound? It's the sound of ARMYs collective heartbreaking. Fans seriously couldn't handle Junkook's heartfelt breakdown, and they wasted no time hopping on Twitter to let us all know how they were feeling about this moving moment.

Check out some of these touching tweets:

Luckily, Jungkook had his bandmates there to comfort him. J-Hope yelled "Don't cry!" into his mic as JK shed his tears and Jimin wrapped a supportive arm around his shoulders on stage. Later, Jungkook took to Twitter to share a video he filmed on his ride, presumably, to the boys' hotel after the concert in which Jimin tells him not to cry and asks if he's OK. Could BTS be any more supportive?!

It's clear that Jungkook puts his whole heart and soul into his performances — as do the rest of the boys. In fact, RM gave the most inspirational speech at the end of the May 19 MetLife show about what it feels like for the group to be living out their dreams.

You can watch RM's speech in its entirety here: