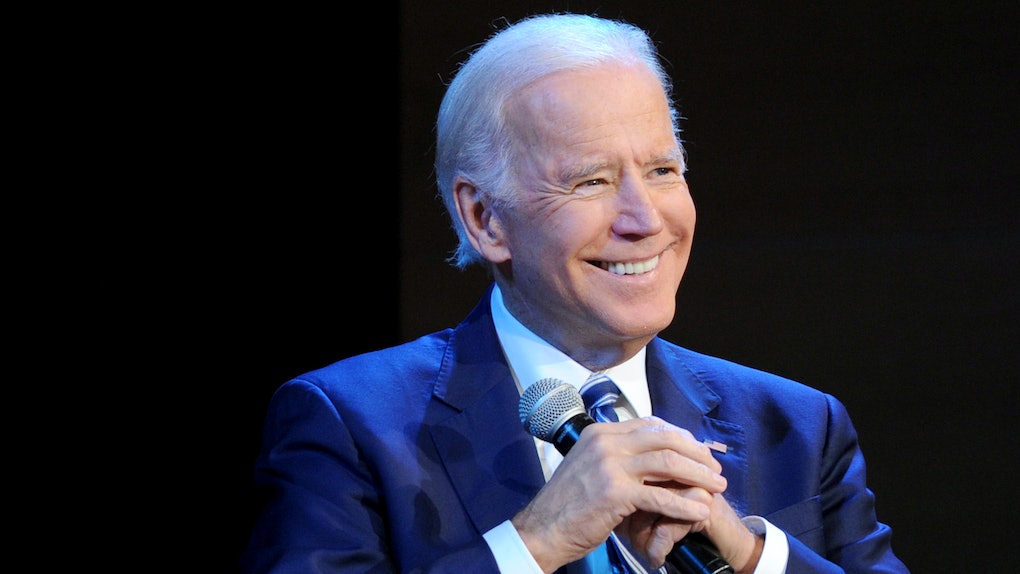 Get the tissue boxes out, ASAP. The View got extra emotional on Dec. 13, and you're really going to need to wipe away a boatload of tears for this one. This video of Joe Biden comforting Meghan McCain about her dad's cancer diagnosis will pluck at pretty much every single heart string you've got.

Biden dropped by the talk show to promote his new book Promise Me, Dad, a memoir about his son Beau's battle with cancer. Things got emotional when The View co-host Meghan McCain brought up her father, John McCain, and his ongoing struggle with glioblastoma, the same brain cancer that killed Beau in 2015.

McCain started weeping, and said it was too difficult for her to finish reading Biden's book. She said,

I think about Beau almost every day, and I was told, I’m sorry, that this doesn’t get easier, but you cultivate the tools to work with this. I know you and your family have been through a tragedy that I haven’t conceived of.

The former vice president moved over to sit next to McCain, took her hand, and tried to console her.

“There’s a lot of things happening, there’s breakthroughs that are occurring now, it could happen tomorrow," Biden told her. “So there is hope. And if anyone can make it, your dad — her dad is one of my best friends.”

John McCain was diagnosed with brain cancer this past July. At the time, he told CBS that the diagnosis was "very, very serious," and the doctors called the disease "a very poor prognosis." The 81-year-old has continued to serve in the Senate, and memorably voted against repealing the Affordable Care Act in Sept. 2017.

This might come as quite a shock to many of us, but it turns out that John McCain and Joe Biden are actually good buddies.

"You may remember when you were a little kid, your dad took care of my Beau," Biden said to Meghan McCain. "Your dad ... became friends with Beau. And Beau talked about your dad’s courage — not about illness — but about his courage.”

Sen. McCain and then-Vice President Biden were awarded Prize for Civility in Public Life from Allegheny College in 2016, and both men showed up to accept their awards together, which is quite possibly the whole concept of #friendshipgoals personified. During his acceptance speech, John McCain recalled a time when he was the Navy’s Senate liaison, and was forced to carry Biden's bags onto a plane.

“That was almost 40 years ago, and by God, I still resent it,” the senator quipped.

Biden added on The View that — despite all of their differences — John McCain is one of his closest friends. He said,

Her dad goes after me, hammer and tong. We’re like two brothers who were somehow raised by different fathers because of our points of view. But I know — and I mean this sincerely — even when your dad got mad at me and said I should get the hell off the ticket — I know if I picked up the phone tonight and called John McCain and said, ‘John, I’m at 2nd and Vine in Oshkosh and I need your help,’ he’d get on a plane and come.'

The former vice president noted that Sen. McCain gave Beau some much-needed strength during his treatment, and that his son always admired the senator's courage. Biden also insisted that we shouldn't lose hope when it comes to cancer, all while holding Meghan McCain's hand. Seriously, can he just come back into office? Like, right now?

"We gotta keep moving like this is gonna happen. It is gonna happen. This is why I set up the [the Biden Cancer Initiative]," he said. "Because I swear, guys, we are gonna beat this damn disease. We really are."