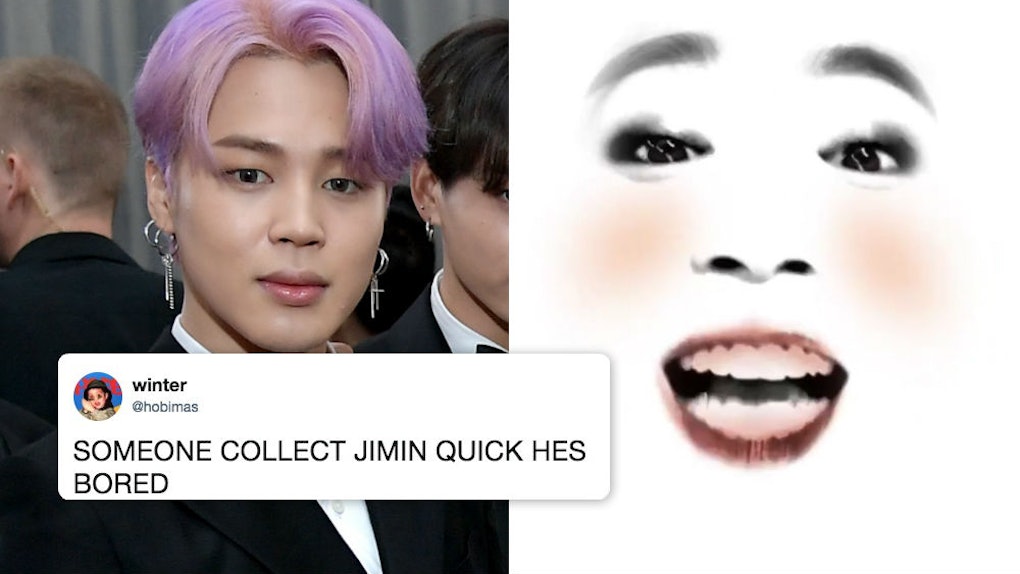 The BTS boys have captured the hearts of basically everyone on the planet — myself included. RM, Jungkook, V, Suga, Jin, J-Hope, and Jimin are all incredibly talented artists, but I personally swoon whenever I see Jimin on stage or on social media because he is dreamy AF. So, if you're anything like me, you will wholly appreciate this video of BTS' Jimin singing "Magic Shop" on the Snow app. If you're wondering just what exactly the Snow app is, don't worry, fam! I've got you covered.

For those of you not ~in the know~, the Snow app is a messaging and multimedia app that was created by Camp Mobile, which is a subset of Naver Corporation, South Korea's most popular internet search engine (think Google, but slightly different). The app is sort of similar to Instagram, since it has tons of beauty filters and stickers you can apply, but it's also like Snapchat in a way, because photos and messages sent through Snow can only be accessed for a short period of time.

So now that we have that out of the way, let's talk about Jimin. In the early morning of Wednesday, Feb. 13 (which is, like, midnight for him in South Korea), he took to Twitter to upload a video of himself singing the BTS song, "Magic Shop," using one of the filters on the Snow app. And when you see it, you will 100% laugh out loud because he looks that hilarious.

We basically see a blank white screen, with only parts of Jimin's face visible (his eyebrows, eyes, nose, lips, and enhanced rosy red cheeks), while he's singing. But the real kicker comes at the end, because while the video starts with him singing in his normal dreamy voice with his usual serene, somewhat seductive facial expression, he suddenly surprises his fans by bringing his overexposed face so close to the camera that it basically takes up the whole screen and singing the end of the chorus in the most OTT, goofy way. Rather than explain it to you, I'll show it to you, because this is a video the world really needs to get behind:

If you sort of want to watch it over and over again on repeat, but are also a little afraid, then you're doing it right.

Naturally, the BTS ARMY went wild on social media, sharing their reaction to the video and using the clip in various, absurdly funny ways:

Fans definitely were *not* expecting that surprise ending.

I mean, they're not wrong. It is slightly terrifying if you ask me.

Others have turned the video's ending into a very usable meme:

And some BTS fans have even used the Snow app's filter to imitate Jimin:

And FYI, because of this video, Jimin is now trending:

Bravo, ARMY! A valiant effort has been made, and I couldn't be any more proud.

But Jimin wasn't done yet. He surprised ARMY again by giving "Promise" the Snow app filter remix as well! I didn't know how much I needed these wacky videos in my life!

To be perfectly honest, I'm so, so proud of BTS. On Sunday, Feb. 10, the BTS boys presented the award for Best R&B Album at the 61st Grammy Awards — making history as the first K-Pop band to ever present at the show. It wouldn't surprise me if, next year, they'll be the ones on stage accepting an award, rather than presenting it. Keep it up, BTS!