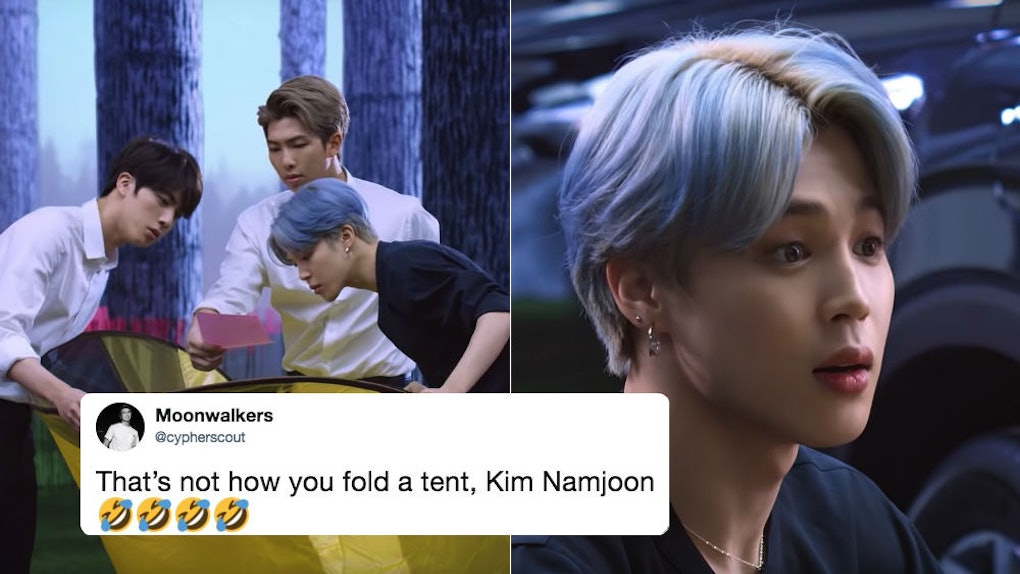 This Video Of Jimin, RM, & Jin's Hyundai Palisade Ad Will Give You 'Bon Voyage' Flashbacks

We've already gotten a few different Hyundai ads starring our favorite boys, from the first ad that featured all the boys cruising in a Palisade with "DNA" playing in the background (before giving us the rundown on what family really means in perfect English) to the subunit ads featuring Jungkook and V moongazing and Suga and J-Hope being adorable little scaredy-cats out in the wilderness.

It makes sense that Jimin, RM, and Jin are the stars of the latest of the Palisade sub-unit ads, and their commercial does not disappoint. In it, the boys are trying desperately to figure out how to fold up a pop-up tent and failing miserably. If you're wondering how many BTS members it takes to fold up a pop-up tent, it's more than three, because Jimin, RM, and Jin never do figure it out.

About 12 seconds into the montage of the boys failing over and over at their task, Jimin has a eureka moment when he realizes the Hyundai Palisade is so very large and spacious, they can actually just slip the tent right into the car without folding it up. Good thinkin', boys! Then commences an adorable celebration where the boys embrace each other in a group hug and jump around in excitement over their spectacular teamwork.

Check out the commercial below!

If you're having déjà vu watching this particular commercial, it's probably because you're having flashbacks to that time BTS went camping while traveling in Malta while filming Bon Voyage 3 and were tasked with setting up a tent.

Let's just say they had a similarly hard time in that situation. Jungkook and Jimin were paired together to put together one tent and they started out with gusto, Jungkook exclaiming, "This is a tent, bro! You know? You ready?" in English with the utmost confidence.

But when it came to actually pitching the tent, they ran into a bit of trouble (because, like, tents are confusing). The pair had to reluctantly take some advice from an instructor.

With a bit of help along the way, they were able to successfully pitch their tent and they were so happy about how it turned out. Because teamwork makes the dream work, y'all!

The other boys building their tents wasn't as heavily documented on Bon Voyage, but V did proudly show off their handy work to J-Hope, proudly exclaiming, "Ta-da!" when J-Hope arrived at the campsite.

Maybe if Jimin, RM, and Jin had had Jungkook, V, Suga, and J-Hope (or that Bon Voyage instructor) on hand, they'd have all been able to figure out how to fold up the pop-up tent together. But thank God we live in a world where Hyundai Palisades are a thing, because it makes BTS' less-than-stellar camping skillz a non-issue. But let's be real: what these boys lack in camping skills, they more than make up for with their genius singing and dancing skills.