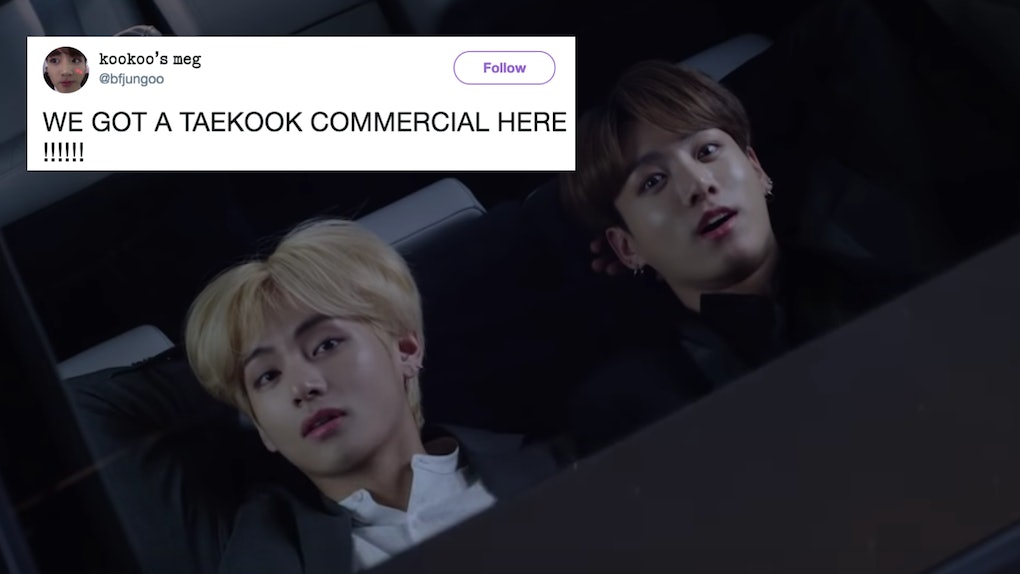 Who doesn't love goofing around with your best friend who also happens to be a member of the super famous K-pop group that you're also a part of? I know I sure do. I bet I'd love it even more if I was paid to do it as part of a massive global car campaign. BTS members Jungkook and V know exactly what I'm talking about, because they just did that for Hyundai. The video of BTS' Jungkook and V's moongazing Hyundai ad is equal parts adorable and nostalgia-inducing, which is a classic combo for car commercials. ARMYs are particularly pumped to soak up that Taekook content.

If you haven't heard about Taekook yet, it's simply the term ARMYs use when talking about Jungkook and V's relationship. All of the BTS boys announced their collaboration with Hyundai back in November when they released an epic commercial as a group, but this time, V and Jungkook are taking the shine. Their Taekook commercial is much shorter than the original ad, but also a lot more playful too. In fact, it's only 23 seconds of feel-good fun.

The boys start by laying the seats down in the back of the SUV so they can peer up through the sunroof. (Actually, in this case, it's more of a moon roof.) After that, V and Jungkook roll open the window to reveal a giant, glowing moon. Using BTS magic, V uses his hands to reel it in, bringing the moon closer and closer to the car and his friend. Jungkook loves it, obviously, but not as much as fans love watching it.

Catch all the feels here:

Fans sounded off about the ad on Twitter. One person summed up the majority of folks' feelings writing, "OH MY GOD WE GOT A TAEKOOK COMMERCIAL!!!!!!! I AM LITERALLY DEAD I CANNOT BELIEVE THIS HAPPENED."

Beyond that, people mostly shouted with joy and posted tons of crying emojis and exclamation points. You know, the usual.

You guys get the picture.

For funsies, it's worth revisiting BTS' original Hyundai ad, too. The OG commercial was released around the holidays and circled around the theme of "family." Individually, all of the band members described what family means to them, with RM summing things up at the end. "Nationalities, ages, skin colors. They're all welcome in today's definition of family," he said.

It's even more fun because the commercial features the boys whistling their hit "DNA," because let's be real, Hyundai isn't stupid. If you get BTS to be in one of your commercials, you've gotta include at least one of their hits. In contrast to Taekook's short and sweet ad, the first commercial (if you can even call it that) is over three minutes long.

Hopefully, this is just the beginning of many more amazing BTS friendship commercials to come. A little Jikook ad, anyone? Vmin? Minjoon? Give the people what they want, Hyundai!

More like this
Do The BTS Members Have Personal Instagrams? Here's What Baby ARMYs Need To Know
By Michele Mendez
Cardi B's Quotes About The Racial Pay Gap In The Entertainment Industry Needed To Be Said
By Brandy Robidoux
Are Meghan & Harry Getting Paid For Their Netflix Show? Here's The Deal
By Sydney N. Sweeney
Stay up to date