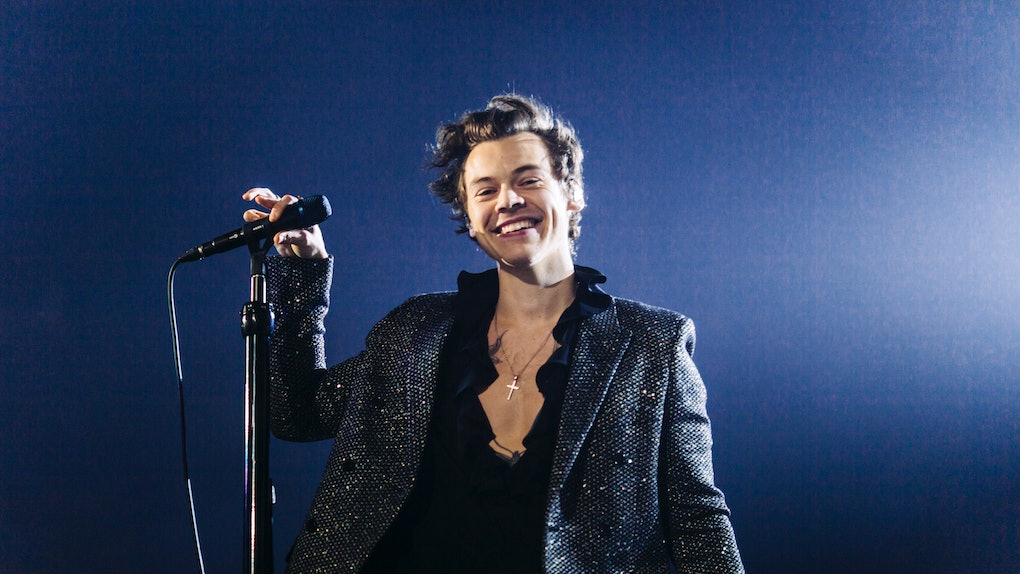 ICYMI, Harry Styles is proudly proclaiming his status as an Arianator after busting some seriously epic moves during the "Boyfriend" singer's London concert on Saturday, Aug. 18. Luckily for all of us who weren't there to witness Harry's dance moves, there's footage of this all going down, and this video of Harry Styles dancing at Ariana Grande's concert is pretty much guaranteed to put a smile on your face. Seriously, though, there's just so much pure joy happening in these clips, and it's just an added bonus that he also spent the concert hanging out with Stranger Things breakout star Mille Bobby Brown. The Twitterverse is so here for all of this pure unadulterated joy, and fans' reactions will have you saying, "Same."

On Saturday, Styles said "Thank U, Next" to any weekday scaries by choosing to live his best life on the dance floor. His venue of choice? Grande's London stop on her Sweetener World Tour, where she performed an array of her most catchy bangers including "Dangerous Woman" and "Into You." Styles was obviously ~feeling~ the music, and various concert-goers snapped videos of him dancing up a storm in the VIP section of the O2 Arena. The former One Direction star was living his best life (dressed in head-to-toe white with a white t-shirt and white bell bottom pants with white heels, just FYI), and he didn't care who knew it. Oh, and there's also the fact that he apparently chose to wear seven rings to the concert, you know, because of Grande's hit single "7 Rings." I'm just saying, the best Harry Styles is the extra AF, Ariana superfan Harry Styles. There was plenty of booty popping, grinding, singing, and full-on jamming, and you’ll never stan anything so hard.

Due to his head-turning moves, the Dunkirk actor captured the attention of many fans who were at the show and also jamming out to the music. Several videos that show him dancing his heart out are now circulating Twitter, and they're peak summer 2019 vibes. Just in case you were wondering, "Dangerous Woman" seems to be one of his personal favorites.

In addition to working up a sweat on the floor of the VIP section, Styles was also part of one of the best pop culture crossovers in recent history when he was spotted chatting with Millie Bobby Brown for most of the evening. Judging by the tweets, people are stanning this unlikely friendship, which no one saw coming, but also seems to make total sense considering they apparently have a love of Grande's music in common. Now, if only we could find some way to third wheel this iconic duo, because they're total #SquadGoals.

Only time will tell whether this is the start of a strong friendship between Styles and Brown or just a one-time hangout, which is hard to really gauge based on their 10-year age difference and busy schedules. Still, it looks like they definitely hit things off, and I'll personally be filing away Styles' dancing videos for a fool-proof remedy for the weekday blues.