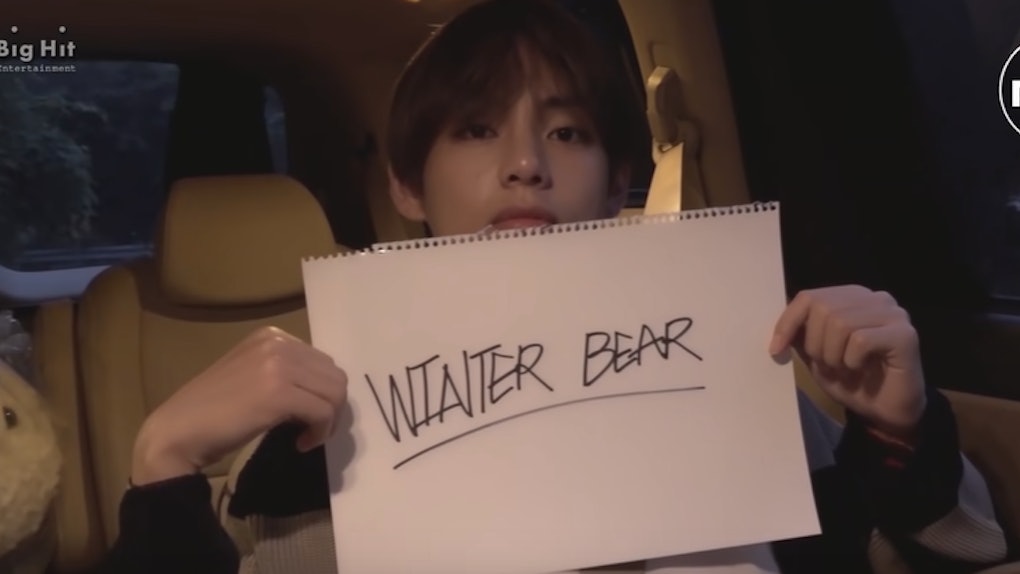 This Video Of BTS' V Shooting The "Winter Bear" Cover Is So, So Serene

Earlier this month, V had the whole ARMY in their feelings when he surprised them with "Winter Bear" on Friday, Aug. 9. The song itself sounds like a sweet lullaby, and the music video only made it a thousand times more beautiful. Of course, fans had no idea it was coming since V didn't announce it or anything. If you ask the ARMY, they would tell you that's usually how BTS' solo releases go. A member just drops a solo song out of nowhere, sending fans into a frenzy. Now less than two weeks after the song's release, Big Hit Entertainment has released the video of BTS' V shooting the "Winter Bear" cover, Let me tell you, the video is just as sweet as the song.

On Wednesday, Aug. 21, Big Hit dropped the behind-the-scenes video of V shooting the cover photo for "Winter Bear." The video started with V and Jungkook lying down together while watching the music video for "Winter Bear." Jungkook then started singing the song himself and oh my gosh, it sounded absolutely heavenly.

You can hear Jungkook singing at the 0:48 mark below.

It's nice to see how supportive the other BTS members have been of "Winter Bear" so far. Just a day after the release of V's solo song, Jimin did a cover of "Winter Bear" while recording a livestream and even J-Hope couldn't help but join in. You can watch the moment below.

That was so cute, wasn't it? But let's get back to this behind-the-scenes video. After Jungkook sang a couple of notes of "Winter Bear," the scene transitioned into V driving to the place he would eventually shoot the "Winter Bear" cover. While in the car, V had a notepad with him and he sketched out the words "Winter Bear." He wasn't satisfied with the first time he wrote it (I think it was too small and off center), but he seemed to like his second try because he even showed off his little creation to the camera.

V also showed the camera his little bear figures that he brought with him for the cover shoot (that Jimin gifted him while filming the RUN BTS! Season 3 finale, btw). Awww, so cute!

Then, he went to a field to snap a few pics for potential "Winter Bear" cover photos. It was so amazing to see how different the photo could have looked. Because the area inspired V so much, he even filmed some shots for the "Winter Bear" music video there.

Wow, I love these behind-the-scenes videos so much. It really shows how the BTS members have a clear vision for each part of their music process. With V, he knew exactly how he wanted "Winter Bear" to look and I think that's amazing. It's nice to see V do solo projects like this once in a while because that's when fans get the opportunity to learn more about V as an individual artist.

Now that V has let fans in on the making of "Winter Bear," how about going back to watch the music video again?

More like this
Hailey Baldwin's Quotes About Being Rude To Her Waitress Cover A Lot Of Ground
By Brandy Robidoux
Rosé From BLACKPINK's "Gone" Music Video Is The Ultimate Sad-Girl Aesthetic
By Abby Monteil
What Does Taylor Swift's Vault Door Video Mean? Fans Are Decoding It
By Cianna Garrison
Stay up to date