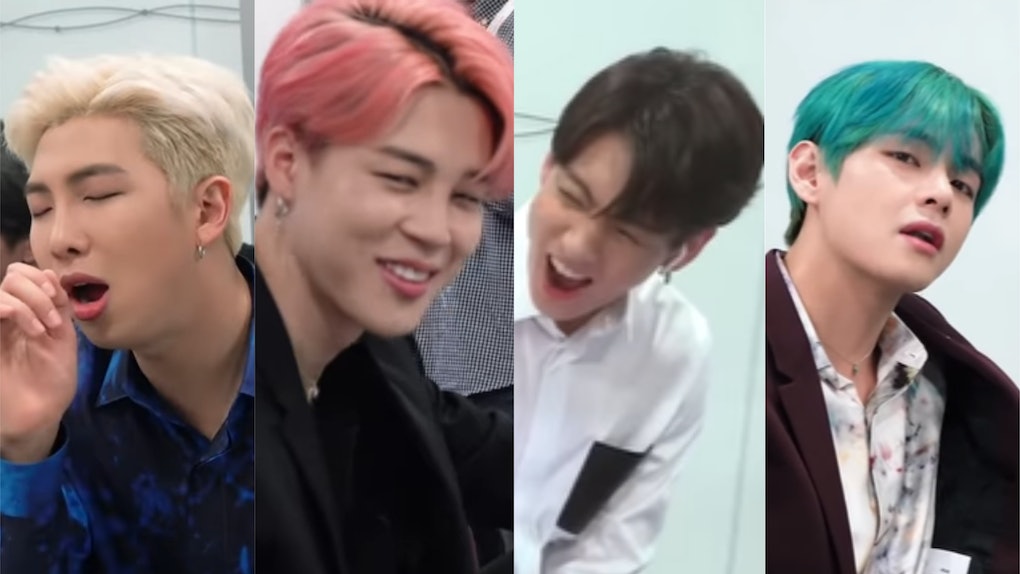 This Video Of BTS' RM, Jimin, Jungkook, & V Singing "Shallow" Together Will Crack You Up

BTS never fails to make my day. I love waking up in the morning to find that Big Hit Entertainment has released yet another Bangtan Bomb video of the group doing something cute or hilarious because I just can't help but smile. BTS' positive energy is just so contagious and it's just one of the many, many reasons I adore them. Big Hit's latest upload is a video of BTS' RM, Jimin, Jungkook, and V singing "Shallow" together. Yes, they really do sing "Shallow" from A Star Is Born.

In the video, the guys do vocal warmups. As the ARMY knows, Jimin, V, and Jungkook are all part of the vocal line so it makes sense for them to be practicing their vocals before a performance. But fans would be surprised to see that RM takes part in these vocal warmups, too. He may be a member of the rap line, but that doesn't mean he just goes on stage with no practice whatsoever. He has to warmup his vocals like the rest of the members!

The video started with Jimin and RM singing BTS' song "Make It Right" from their album Map of The Soul: Persona. Jimin looked so amused seeing RM singing since like I said, RM's a member of BTS' rap line.

About 45 seconds into the video, the camera then panned over to V and Jungkook. V sang Lauv and Troye Sivan's "I'm so tired...," while Jungkook went all Bradley Cooper on us and started singing "Shallow" in a deeper voice than he usually sings. RM then joined the "Shallow" karaoke sesh by singing Lady Gaga's part opposite Jungkook's Bradley Cooper and it was basically like seeing the Jackson and Ally duet all over again.

While RM and Jungkook were sitting at a distance from each other, the Big Hit editors managed to fit both RM and Jungkook in the frame so fans could witness this wonderful duet taking place.

BTS are clearly huge fans of "Shallow" because this isn't the first time fans have heard the guys singing the track.

Back while the group was promoting Map of The Soul: Persona in the U.S. in April, BTS stopped by The Morning Mash Up on SiriusXM Hits 1 in New York and couldn't help but gush over A Star Is Born. Jungkook said that he loves the movie, and then just the mention of it made RM burst out in song (although at that time, he did Bradley Cooper's part!). You can listen to BTS (but mostly RM) singing "Shallow" on The Morning Mash Up on SiriusXM Hits 1 below.

One fan on Twitter noted how each time RM sings "Shallow," he closes his eyes and uses his hand as a microphone. That's how you know he really gets into the song.

It would be so awesome if BTS would cover "Shallow" for real. Fans know the members share covers of their favorite songs (like Jungkook's cover of "Look At Me" by George) every once in a while, so why not "Shallow?" That would be everything.

More like this
BTS' Jimin & Jin's Videos Singing In A Car Are A Surprise A Cappella Concert
By Abby Monteil
Taylor Swift's 'Fearless (Taylor's Version)' Lyric Changes Are Small, But Meaningful
By Michele Mendez
This 'Drag Race' Season 13, Episode 14 Clip Shows The Top 4 Getting SO Real
By Lexi Williams
Stay up to date