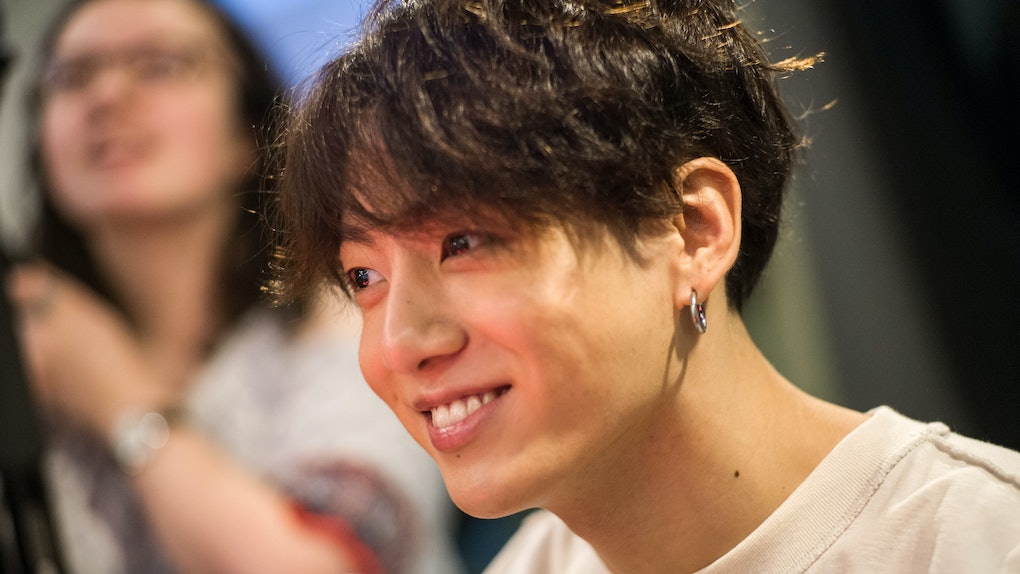 The BTS members love to randomly surprise their fanbase with snippets of the art they work on solo. Whether it's lighthearted and funny Photoshop work, some pretty doodles, or just videos of the guys swimming (yes, members have literally tweeted videos of themselves swimming in hotel pools), these guys are clearly always staying active. And their fans love to see it. The most recent example of this is BTS' Jungkook's cover of "Look At Me" by George. The youngest member of the group tweeted a video of him singing the track. It's here unexpectedly, but it is being welcomed with open arms.

Context: "Look At Me" by George has the most gloriously '90s R&B sound I've ever heard, even though it was released on Feb. 21, 2019. Jungkook's cover consists of him singing over George's voice on the song, pretty much in a moment of, "Oh, I love this song. I'm gonna sing along." Fans can't get enough of his sweet vocals. I mean, he sounds wonderful in the video. He sings about two minutes of the song, then at the end, during a lyrical break, Jungkook sings along to the music before ending the recording.

Listen all the way to the end. The last sound bite is stupid adorable.

As for who George is as an artist, he seems to be a fairly new singer to the South Korean music scene. He made his debut in 2018 as an R&B artist, with his debut music landing on the Apple Music charts. His first EP, Cassette, dropped in 2018 and consisted of 5 tracks, but he has been releasing music since 2016.

This is the original version of "Look At Me" that Jungkook covered.

One gracious fan translated the Korean lyrics into English on Medium. Let's dive into this love song, shall we?

The lyrics start off,

I’m the one who found your love / I will spread into your heart / In the meantime, if all of your hearts melt / It’s like I’m dreaming / Please, look at me like that

I am... feeling things. The following lyrics read,

Then the chorus repeats two more times, just in case there's anyone still not in love yet.

Fans of Jungkook are sobbing over his cover.