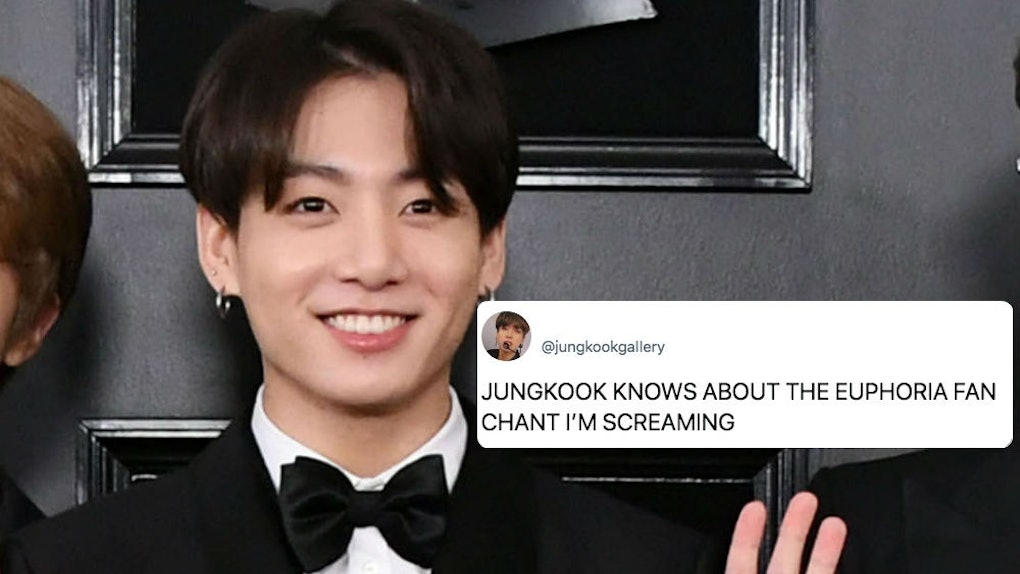 You can't have K-Pop without fan chants, like, it's practically impossible. Besides light sticks, they are the one other aspect of K-Pop concerts that really brings fans together as a community. Usually, fan chants are created by the group's labels themselves so that they fit perfectly with the timing and beat of a song, but occasionally, fans create their own, like the BTS ARMY has done for Jungkook's solo song, "Euphoria." Up until now, fans have been wondering if Jungkook has been aware of the chants made for his song. Although they've been pretty loud the past few BTS tours, they don't know if they've been so loud that they've gotten past Jungkook's in-ear monitors, which practically block out all other sounds other than BTS' sweet, sweet vocals. But I've got good news: Jungkook has heard the fan chants, and the video of BTS' Jungkook reacting to ARMYs' "Euphoria" fan chant will make you scream.

On May 15, BTS released the concert DVD for their Love Yourself tour in Europe. It featured a clip of Jungkook watching a video of overseas fans chanting along to "Euphoria." Because the song doesn't have an official fan chant, he looked confused as he tried to figure out what fans were chanting (more like screaming, RIP headphones users). He repeats the video and then realizes that they're chanting:

The Korean phrase translates to the following in English:

Watching his face as he slowly figured it out has honestly made my day. Just look at his reaction!

Even Jimin and V, who were in the room as Jungkook was just discovering the viral fan chant, loved it. Jimin called it "cute" and wondered, "How did they think to make it a chant?"

Well, Jimin, I have an answer for you. The original phrase comes from one of BTS' YouTube videos, where Jungkook is rehearsing his introduction for the South Korean music program Show! Music Core. That was all the way back in October 2016 when the boys were promoting "Blood Sweat & Tears" during the Wings era.

Check it out in the video below, beginning at the 3:28 mark.

OK, so how did it become part of the fan chant? YouTuber Byronvids edited Jungkook's cute intro onto popular K-Pop songs, including "Euphoria." As for how he got the idea, I have no clue, but does it really matter now? The whole thing is hilarious.

Byronvids then attended BTS' concert on September 5, 2018, at the Staples Center and did the fan chant in person! The video went viral, and ever since then, fans have been screaming the fan chant whenever the chorus hit in "Euphoria."

Since Jungkook's reaction video is featured on BTS' Love Yourself in Europe tour DVD, that means he's known about the fan chants since October 2018. Let that sink in for a minute. Jungkook has been aware of fans screaming, "Annyeonghaseyo jeoneun Bangtan Sonyeondan hwanggeum maknae Jeon Jungkook imnida," for months.

Now that fans know that he knows, I'm sure that they'll be screaming that fan chant even louder from now on, especially since Jungkook, Jimin, and V were so amused by it. All I can say is that BTS' MetLife Stadium concerts are going to be really interesting. Can you imagine over 80,000 members of the BTS ARMY screaming the cute fan chant? Absolutely iconic.