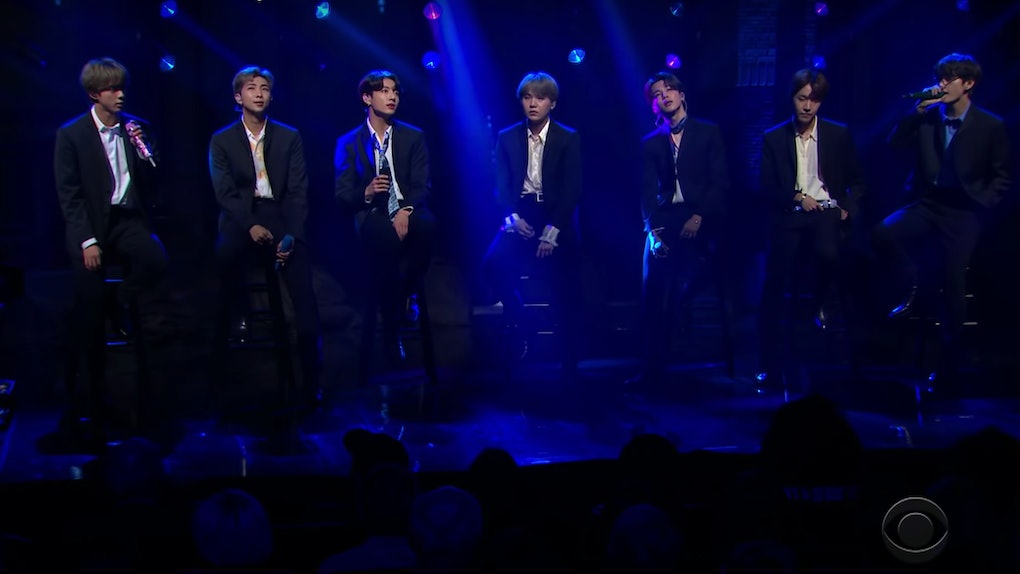 Just days after lighting up the stage with an unforgettable tribute to The Beatles, K-Pop boy band BTS shared their vocal magic once again on The Late Show with Stephen Colbert on Friday, May 17. The seven group members — Jungkook, Jimin, V, Suga, Jin, RM, and J-Hope — skipped the dance moves to really let their voices shine for the soulful number, and this video of BTS' Colbert performance of "Make It Right" shows that they hit it out of the park. Unsurprisingly, ARMY can't get enough of the group's vocals and harmonization in the track — and you won't be able to, either, after watching this clip of the live performance.

Considering the K-Pop boy band's successful Colbert debut just days earlier on Wednesday, May 15, fans weren't surprised that they slayed it once again. ICYMI, the Billboard Music Award winners made quite the silver screen entrance with a rendition of "Boy With Luv" styled after one of the most famous boy bands to date: The Fab Four.

Beatles fans might remember that the British group made their own U.S. television debut at the Ed Sullivan Theater, and it was a fitting tribute that BTS did the same on May 15.

With Colbert dressed as Sullivan, a voiceover announced BTS' arrival on stage, saying, "Now, on the same stage 50 years later, plus 5 years, 3 months, 6 days, a new batch of mop-topped heartthrobs has landed."

Dubbing the group the "Fab 7," Colbert took over, telling the audience, "You may have heard there's a new musical craze sweeping the globe. These fellas are really something, and people are so excited, you can only call it BTS-mania."

The "Boy With Luv" hitmakers went on to give a buzz-worthy performance of their chart-topping single, and their successful Colbert debut earned them an encore performance on May 17 which served as a showcase of their vocal prowess and singing abilities.

On Friday, Jungkook, Jimin, V, Suga, Jin, RM, and J-Hope's second performance on the Colbert stage was a new track off of their much-hyped album Map of the Soul: Persona album, which dropped last month. The Ed Sheeran collaboration "Make It Right," which was arguably one of the most highly-anticipated tracks off the EP, was a fitting song to celebrate the album's drop — and the group definitely did the ballad justice during their live performance.

Shuttering their "Boy With Luv" dance moves from a few nights earlier in favor of a stronger focus on vocals, the group sat in stools in a semi-circle and performed "Make It Right."

Needless to say, ARMY is so here for it.

Map of the Soul: Persona, which was released last month, is described as "a nod to the band’s past while showcasing their maturity and newfound understanding of love and the ever-widening world around them. The tracks have a clear message: finding joy in love and reaching out to the world," according to Billboard. As the band continues its stadium tour, I think it's safe to say fans will be looking forward to even more vocals-centric performances of "Make It Right."

More like this
The Soundtrack For Netflix's 'The Irregulars' Season 1 Is Such A Vibe
By Ani Bundel
Taylor Swift's 'Fearless (Taylor's Version)' Lyric Changes Are Small, But Meaningful
By Michele Mendez
These Tweets About Taylor Swift's "Mr. Perfectly Fine" All Ask 1 Important Question
By Sydney N. Sweeney
Stay up to date