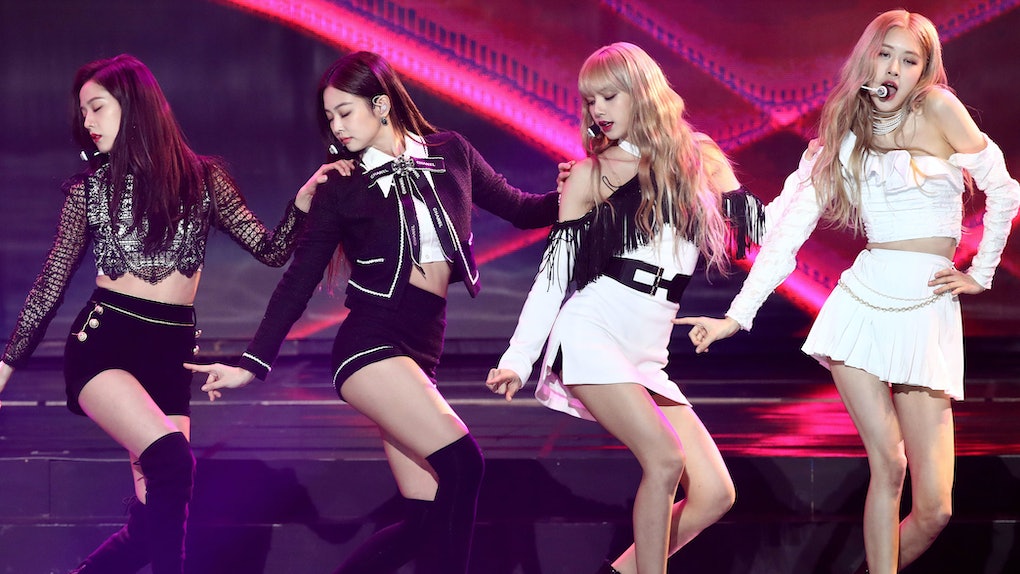 Raise your hand if you've been fully absorbed in the K-Pop world lately. I'll be the first to tell you that this music is a literal movement, people, and I am here for it. A name you might be hearing more and more is BLACKPINK, a K-pop girl group who are making some serious waves in the music world. They're blowing up at an astonishing rate (cough cough, they'll be coming to Coachella in 2019, NBD), and recently performed on Good Morning America, totally wowing their audience. Fortunately, you can watch the video of BLACKPINK's GMA Performance of "Ddu-Du Ddu-Du" and be equalled amazed as everyone else is by these four talented women.

For a bit of background, BLACKPINK consists of four members — Jennie, Ji Soo, Lisa, and Rosé — and each girl has their own special vibe to create one incredible group. Jennie and Lisa are the rappers of the group, while Ji Soo and Rosé sing vocals. Basically, what I'm trying to tell you is that these four are pretty damn stellar at what they do, OK? OK.

So, on Feb. 12, BLACKPINK had their very first group visit to New York to perform live on Good Morning America, and spoke about their announcement that they'd be going on their first North American tour, which they revealed on The Late Show With Stephen Colbert the night before (yasss!).

"It's happening! We're starting in April and we're very, very excited for it," Jennie told GMA. You're not the only one who's excited, girl!

When asked why they felt it was time that America was ready to fall in love with BLACKPINK, Rosé said, "We recently got invited to perform at Coachella, which was unbelievable," adding, "I guess we thought it would just be the right timing to kick off our U.S. tour."

You couldn't be more right, Rosé.

We are so, so ready. In the meantime, check out their pre-performance interview on GMA below:

These four are the ultimate ~squad goals~ if you ask me.

Fans got to witness an incredible performance from BLACKPINK, too, where Jennie, Ji Soo, Lisa, and Rosé knocked their song "Ddu-du Ddu-du" straight out of the park on GMA.

Perfectly choreographed dancing? Check. Impressive rap skills? Check. Off-the-charts vocals? Hell yes. Rather than just go on and on talking about how amazing the video was, I'll do you a solid and just show it to you.

Can you even deal? Because I can't even deal. If this is the first time you've heard "Ddu-Du Ddu-Du," it probably won't be your last (because it's catchy AF and you'll have it on repeat all day). Upon its release, "Ddu-Du Ddu-Du" became BLACKPINK's first song on the Hot 100 singles chart, where it debuted at No. 55, according to Billboard.

And, just in case you're wondering where exactly the BLACKPINK girls got their band name from: Back in June 2016, a representative from their label, YG Entertainment, explained the moniker:

The meaning of Black Pink aims to contradict the common perception of the color pink. Pink is commonly used to portray prettiness, but Black Pink actually means to say that 'Pretty isn't everything. It also symbolizes that they are a team that encompasses not only beauty, but also great talent.

Yep, I can totally dig it.