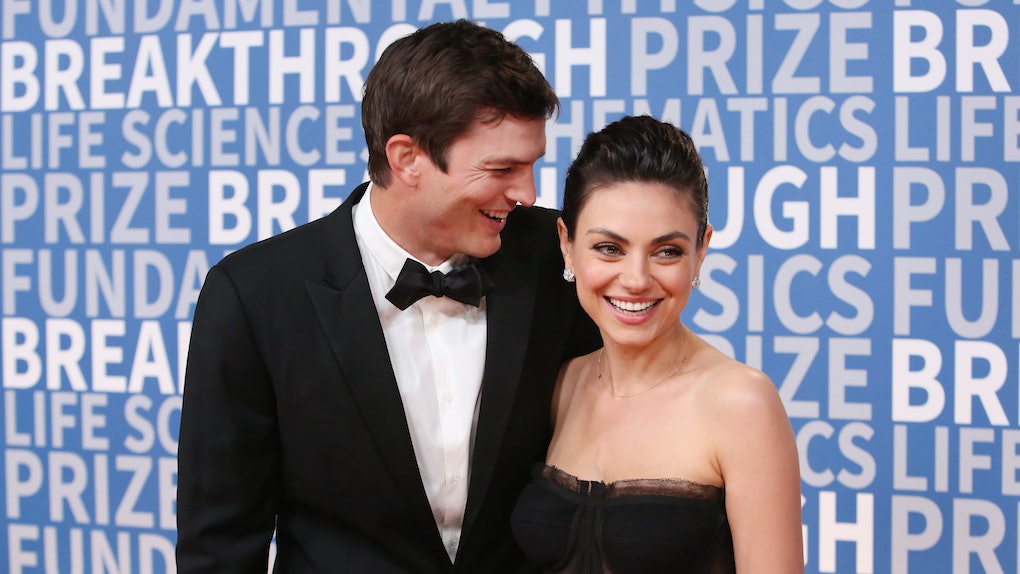 Don't believe everything you read, kids. Despite tabloid rumors that they had broken up because of a ~dark secret~ that was "exposed," Jackie and Kelso are very much still together, as proven by the video of Ashton Kutcher and Mila Kunis addressing breakup rumors. The married parents of two took to Instagram on June 19 to troll a magazine cover story that claimed they had ended their marriage, Kunis was taking the kids with her, and Kutcher was the one with a "dark secret." Instead of getting upset about it, though, they responded to the bogus report in a hilarious way.

Posted to Kutcher's Instagram, a mustache-rockin' Kutcher took a selfie video of him and Kunis in their car talking about the cover.

“It’s over between us,” Kunis calmly says back, showing the camera the photo of the magazine cover.

“I felt ‘suffocated,'" Kunis says, reading off the apparent reasons her marriage ended.

“You felt ‘suffocated’ by me?! I was just so overbearing, wasn’t I?” says Kutcher.

“Also, I took the kids," Kunis points out.

"Oh, you took the kids?! I don't get the kids anymore?!" Kutcher responds.

"Because you had a very dark secret exposed," Kunis clarifies, noting that the ~dark secret~ itself isn't mentioned in the cover photo she was sent.

“Must have been really dark,” Kutcher quips at the end. Oh, these two.

Kutcher's caption on the post was just as funny as the video's contents. He said,

I guess it’s over @intouchweekly have fun selling magazines this week. Maybe next week my wife will be having twins. For the third time. But who’s counting.

What's even more of a delight are the celebrity responses to this video in the comments section of Kutcher's post.

"This is amazing. Miss y’all," Demi Lovato piped in.

Even Rumer Willis (Kutcher's former step-daughter) commented, posting a bunch of facepalm emojis and the hashtag "#fakenews." Other people in the comments section were joking that the dark secret must have been Kutcher's mustache.

Kunis and Kutcher have got to be one of the most private celebrity couples in the game. The two prioritize the privacy of their children, Wyatt and Dimitri, above all else, by keeping their family life on the down-low. They keep their relationship somewhat visible on Kutcher's Instagram, the most recent examples being found in the fact that Kutcher created a dating site that allows couples to book date-night experiences through DateNight.vip. He posted a photo of him and Kunis testing out one of those dates back in April.

"My love and I gave @datenightvip a trial run. I think you are in for something special! We have a few openings tonight and tomorrow night in LA. Link in bio," he said in the caption. Kutcher posts photos and videos of him and Kunis somewhat frequently, giving fans a look into their daily lives, but every one of those posts is positive and show no signs of any kind of rift...

Sure, people can present a different version of their lives on social media than what's actually going on in real life, but Kutcher's most recent Instagram is proof that the rumors about their split have no ground to stand on. Sorry bout it!