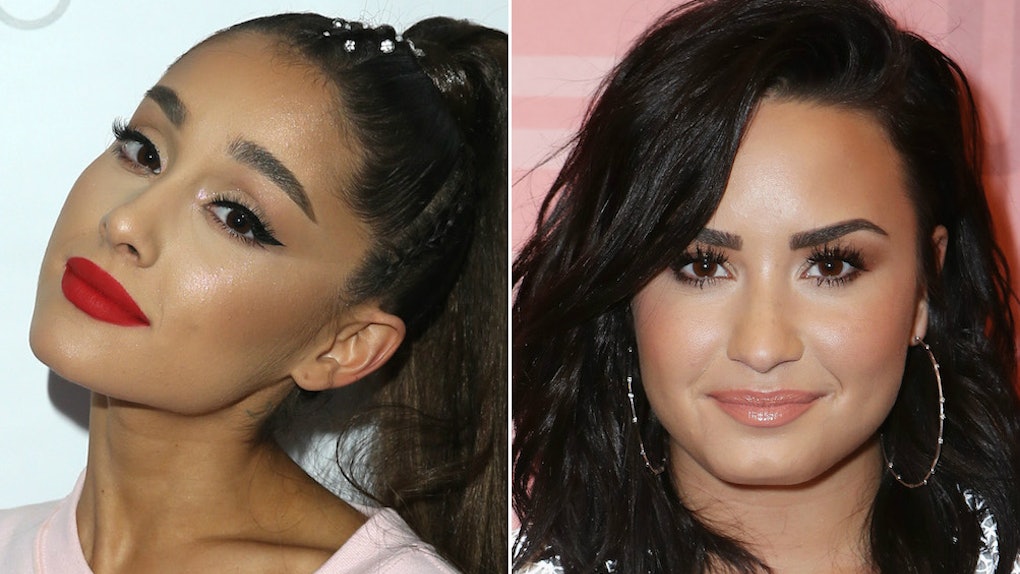 HBD, Demi Lovato! Your fans love ya, and so does Ariana Grande. Demi Lovato kicked off her 27th birthday celebrations on Aug. 19 (her actual birthday is Aug. 20), and to start the celebrations, she hit up Grande's concert at the O2 Arena in London. Before the show started, though, Lovato went backstage to see Grande, and along with Scooter Braun (he manages both singers), they all wished Lovato a big happy birthday. Naturally, it was caught on video, and the video of Ariana Grande wishing Demi Lovato a happy birthday backstage at her concert is so sweet.

Lovato posted the video to her Instagram on Aug. 19, thanking the "Boyfriend" singer for the sweet moment. In the video, you see a group of people consisting of Grande, Lovato, Braun, Grande's dancers, and more huddling up into a circle and putting their hands into the middle. On the count of three, they shot their hands up and yelled a big, "Happy birthday, Demi!" then Grande bounced over to Lovato to give her a huge hug before jetting off to the stage to start her show.

This was too sweet not to post.... before show prayer they did this for my bday 🥺😭 I’m so so proud of you @arianagrande. You fucking killed that!!! I love you tons 💕

In case you were wondering if Lovato had a good time at the concert, her Instagram story just about summed up her feelings. She posted video after video showing clips of the show, also revealing that she was attending the concert with Braun and producer Max Martin. She posted a bunch of videos of her gagging over Grande's vocals (same), and at the end of the night, she posted a video of a birthday cake Braun seemed to have gotten for her.

Braun posted the video to his story at first, saying "Happy birthday @ddlovato" in the caption, then Lovato reposted the video to her story saying, "Only few know how much this cake means to me.. thank you @scooterbraun.. so grateful." Clearly, someone is happy to have Braun as their new manager!

Well, we actually don't have to wonder if Lovato is excited about working with Braun. She made it hella clear she is when she announced she had hired him as her manager on May 11.

Taylor Swift might not be a fan of Braun's, but Lovato sure as hell is.