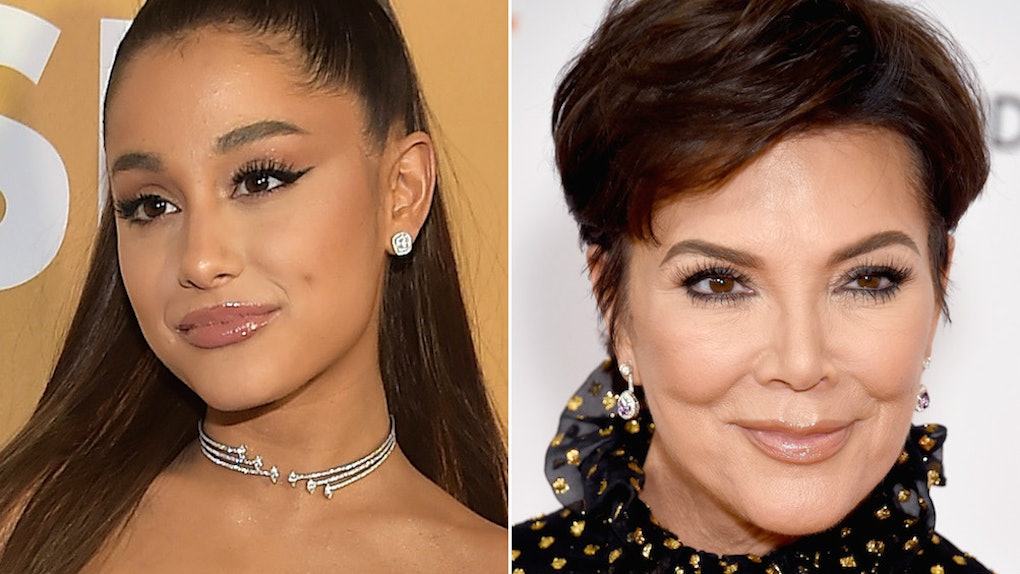 Ariana Grande made her Keeping Up With The Kardashians debut on Sunday, May 12. As you already know, the "Thank U, Next" singer recruited momager extraordinaire Kris Jenner to be in the hit song's music video, and Season 16, Episode 6 of the E! staple shows the behind-the-scenes moments Jenner and Grande had on the set of the "Thank U, Next" music video shoot. And the video of Ariana Grande and Kris Jenner joking about Kylie Lip Kits is so hilarious.

Jenner arrived to the set of "Thank U, Next" during the middle of the horrible wildfires that ripped through California last year. The episode showed the Kardashian-Jenner family evacuating their homes (and having to delay Dream Kardashian's birthday party as a result), so safe to say Kris Jenner's mind was a little preoccupied when she got on set for the video shoot. She was committed to the shoot, though, and seemed happy to have a fun distraction from the severity of the fires for a little bit.

"The fires are still burning in Calabasas," Jenner says in a solo shot during the episode, "but the show must go on. It's the day of the shoot, and I feel really excited to go make my Ariana Grande video debut."

Then in comes Ari! The singer greets Mama Kris fully dressed as Regina George, and Jenner is in her pink jumpsuit that she's seen wearing in the music video. The two are exchanging hellos and complimenting each other's looks when Jenner says, "I love the pink lip!"

"It's Kylie!" Grande says, pointing at her lipstick.

"It's gonna be there for weeks!" Jenner jokes back.

"She walked in with a Kylie box this big, and I started crying my eyes out and I literally put everything on," Grande says to the other people in the trailer about Kris' arrival to the set.

The rest of the video shows Grande talking Jenner through what she needs her to do in the video, as well as her describing the other movies they were making an ode to in the video (iconic scenes from Bring It On, Mean Girls, 13 Going on 30, and Legally Blonde were all featured in the video). And Jenner was clearly excited to be part of it all.

"This is the first time that I've ever been in a professional music video with an iconic artist and someone I admire very much," Jenner says in a later solo shot.

Not only was this Jenner's music video debut, but it was also Grande's KUWTK debut!

"Guys, I'm so excited to make my Keeping Up With The Kardashians debut," Grande says in the video after she teaches Jenner some of the Mean Girls "Jingle Bell Rock" choreo.

"I don't want to let Ariana down," Jenner later adds. "No, no, no." And of course, she didn't. Kris Jenner's appearance in the "Thank U, Next" music video made it all the more iconic. And it's super fun to see these behind-the-scenes moments between the reality star and the pop queen. And it's great to know that Ari fangirls over the Kylie Lip Kits as much as we do.