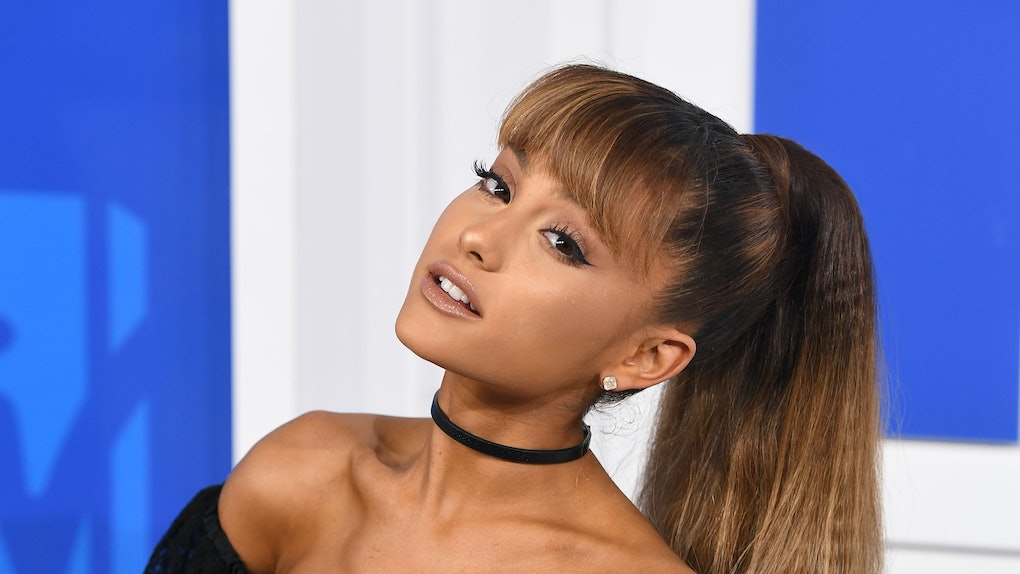 Ariana Grande is proving, once again, she can handle anything life throws her way. The "Thank U, Next" singer took a tumble at her concert in Tampa on Nov. 24, but recovered like the badass she is. This video of Ariana Grande falling during her concert is surprisingly so graceful.

This was no average fall. Grande — strutting the stage in her iconic, vinyl, thigh-high boots — was surrounded by backup dancers who were quick to come to her rescue. With the help of one's hand, Grande shook off the slip-up and immediately got back in tune with her choreography. Girlfriend legit did not miss a beat and the crowd at the sold out show was so impressed.

According to The Tampa Bay Times, the pop star took a minute to share her appreciation to the Arianators in the audience after the fall.

“Thank you for making me feel loved when I fell earlier,” Grande said with a laugh. “I had to fall. It’s been 87 shows and I haven’t fallen yet, so it had to happen.”

After the show, Grande shared a video of the moment she almost face-planted and had a good laugh at herself.

This clip is straight-up impressive. I can't even recover from a high-heel slip-up when dancing at a wedding, let alone if I were performing in front of thousands of fans with all eyes on me.

Grande is no stranger to falling on stage. Fans may recall when she took a tumble mid-concert in March 2018.

Or when she tripped while performing "Thank U, Next" live on The Ellen DeGeneres Show — and recovered promptly with a laugh. Check it out at the 1:20 mark.

In fact, Grande has had so many adorable tripping moments that fans have put together compilation videos.

Let's not forget when Grande made a grand entrance at the 2016 Billboard Music Awards by falling into an E! News reporter and almost taking out the reporter. “Sweet Jesus! I made it,” Grande joked. “I almost broke my ass.”

Grande's recovery during the Tampa concert is definitely her most graceful yet, and from her post-show response, she's clearly learned how to handle these types of blunders like a queen over the years.