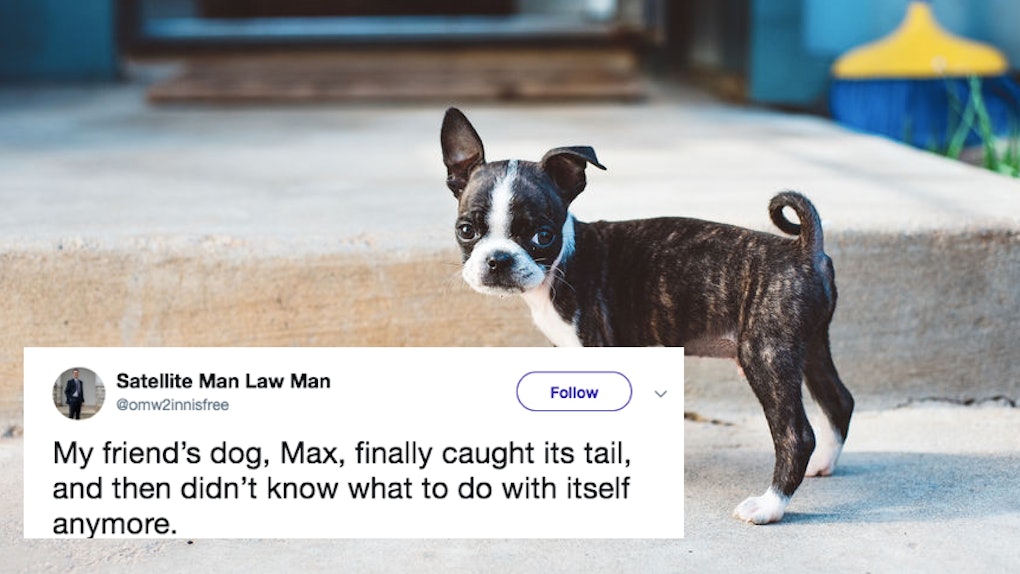 If you're looking for an adorable, heartwarming video of a dog being too cute for words, you've come to the right place. On Friday, April 19, a Twitter user posted a video of a dog who — presumably after many tries — finally caught his tail. Watching the dog chase his tail is obviously very cute, but what happened after catching it is absolutely priceless. This video of a dog finally catching his tail has Twitter applauding the pup, and people can't help but laugh at his reaction.

Twitter user @omw2innisfree posted the 16-second video of the successful pup and captioned it, "My friend’s dog, Max, finally caught its tail, and then didn’t know what to do with itself anymore." In the video, a big black dog can be seen leisurely chasing his tail in circles for a few seconds before he finally chomps down on it. He slides to a halt and a human sitting in the room congratulates him and says, "You got it!" Max hesitates for a bit as he looks at the results of his victory, and slowly starts walking into another room with his tail still in his mouth, eyeballing it somewhat suspiciously. It's truly the most hilarious thing I've seen all week.

But don't take my word for it, check out Max in action for yourself.

Twitter users absolutely loved watching Max conquer his own spinning tail, and then becoming slightly puzzled by the result. Here are some reactions to the adorable video from across the Twitterverse.

Max really might be the most pure thing on the internet this week.

Even an Alexander the Great comparison was made. I say we can dub this pup: "Max the Spectacular."

Even Busy Phillipps weighed in, so you know this is a pretty big deal.

This clip could very well be titled, "It's all about the journey, not the destination."

It seems like Max isn't the only pupper who's slightly confused about what to do when it comes to his tail. Many Twitter users left comments under the vid of Max showcasing their own dogs doing the same thing. Twitter user @hannahlilix posted a video of a pup walking into the house, tail in mouth and wrote, "We call it the crab walk." Another Twitter user, @scarryknives, wrote, "[I] literally just caught my dog doing that."

Max's story isn't the only adorable and pure pupper content that's been floating around the internet in recent weeks. Back in March, Twitter user @USCocksman shared the story of Hank, @USCocksman's dog who saved the family from a massive fire burning in their back yard. In response to Hank's nobility, countless Twitter users responded with photos of their dogs and other pets celebrating Hank's accomplishment and saluting his bravery. If there were a "Goodest Boy" award, Hank would definitely get it.

If you think that it can't get cuter than Hank or Max, think again. Equally cute is a blind dog named Charlie and his seeing-eye dog Maverick who were featured on NBC in March 2019. Charlie lost both his eyes to glaucoma, and Maverick helps his furry buddy navigate the world around him. What could get cuter than a dog having a seeing-eye helper dog? (Answer: nothing.)

These stories about Max, Hank, Charlie, and Maverick confirm one thing — dogs are just too good, pure, and loving for this (sometimes) cold, cruel world. Maybe we can all learn how to be more fun-loving from our furry friends. And if you need help catching your tail, study up on Max's form — he's clearly an expert now.