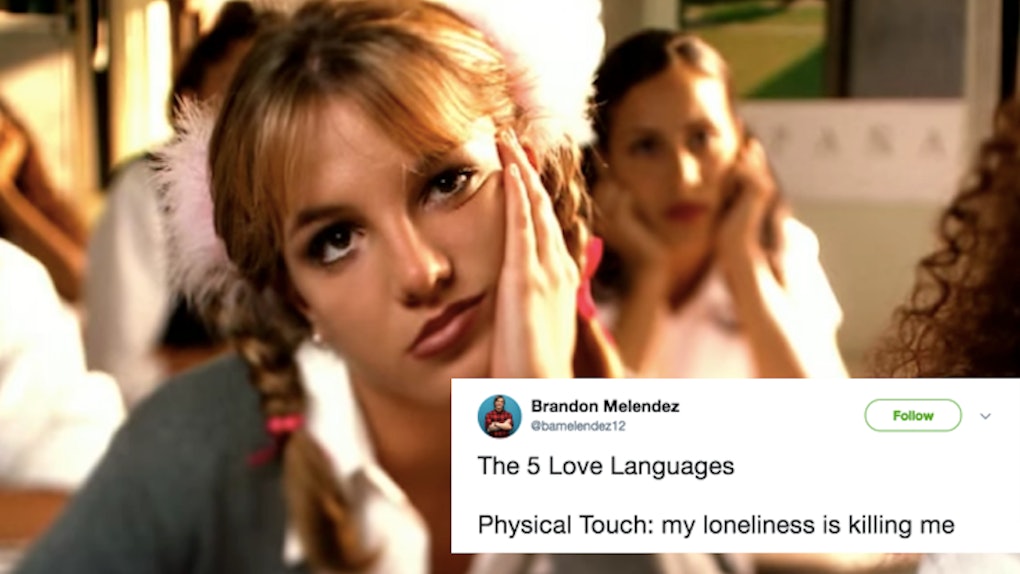 Every once in a while, a tweet comes along that's so epic, so smart, and just so perfect, that you have to take a moment and appreciate it for what it's worth. And now, on this day of our lord, a tweet about the five love languages as Britney Spears lyrics has taken the internet by storm, in the absolute best way.

Now, in case you aren't aware of what the five love languages are, let me explain, because (true story): My mom made me go with her to a love language conference at our church one day when I was in high school. Trust me, I've got the deets, fam.

Basically, in 1995, a fellow named Gary Chapman wrote a book called The Five Love Languages, and it breaks down the different ways in which people express and expect love. These are called "love languages", and everyone has one. The five love languages are words of affirmation, quality time, acts of service, receiving gifts, and physical touch. You can take the official love language quiz here, to find out more about yourself and the way you show your love.

So, now that you know what love languages are, please see the greatest tweet of the year:

Yes, that just happened. It's OK if you need a minute. I'll be right here when you're done recovering.

In case you aren't catching on, let's break it down. The song referenced in the tweet is Britney Spears' iconic "...Baby One More Time" from her 1998 album of the same name. So, by taking each line from the chorus and turning it into a love language, this tweet has become seriously epic.

Personally, I'm "when I'm not with you I lose my mind," how about you?

Really, though, this tweet is the perfect way to end this week. And fortunately, because the internet is truly a blessing, people have taken it and put their own twist on it as well.

Yep. That's Christina Aguilera's 1999 classic, "Genie In A Bottle," turned into the five love languages. Because why not?

Really, though, the original tweet with Spears' lyrics was genius, and people on Twitter really loved it.

For real, this tweet is amazing, but if you want to know what each of the five love languages really means, then look no further.

First of all, there's words of affirmation. Basically, this love language just means that you like when your partner tells you how awesome you are, and how much they love you. Additionally, you'll probably tell your partner how much you love them, as well. Then there's quality time. This is my personal love language, which means I really appreciate just being with my boyfriend. I enjoy that time spent with him, even if we're just watching The Office on the couch.

Next is receiving gifts, which is literally exactly what it sounds like. Small or big, you like when your partner thinks of you and gets you a present. The fourth love language is acts of service, which means that you appreciate when your partner helps out around the house or just does something sweet for you without you asking. Last, but certainly not least, is physical touch, and if that's your love language then you definitely like intimacy, whether or not that's sex.

But really, if you need a reference for the five love languages, this is all you should see, again.