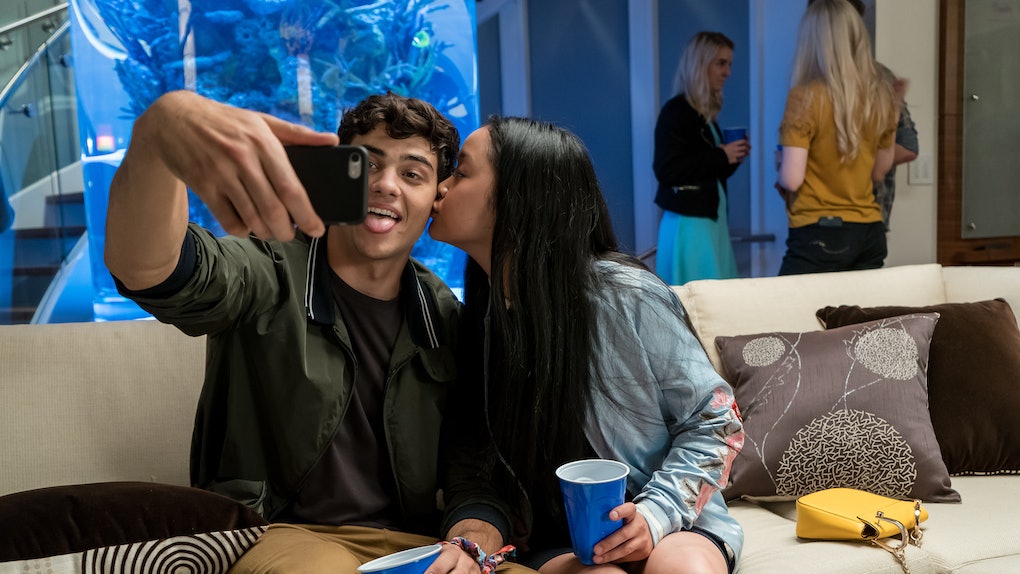 Whoa, whoa, whoa! We're still recovering from the news that Netflix is officially making a To All the Boys I've Loved Before sequel, but so far, we only know that stars Lana Condor and Noah Centineo will reprise their roles as high school couple Lara Jean Covey and Peter Kavinsky. The second book in Jenny Han's TATBILB series introduces a love triangle conflicting with the pair's relationship, and although it's unclear how faithfully that will appear on screen, Condor and Centineo have high hopes for what the film will entail. This To All the Boys I've Loved Before sequel update isn't too specific, but I'm already prepping my TATBILB rewatch in honor of the project.

While fans can always refer to Han's bestselling trilogy to learn what's likely in store for the characters, it's safe to assume that filmmakers will do what they can to make their version of events a little different. In an interview with Entertainment Weekly, Centineo and Condor remained vague about the pre-existing details of the second story, but both discussed what they'd like to see in the new film. Centineo said:

Basically, it seems that Centineo wants Peter to be more than just a lovable jock, but to be fair, he's already surpassed the emotional capacity of some high school athletes I knew. As for Condor, she wants Lara Jean to embrace the boldness she found for her final TATBILB conversation with Peter, saying:

It’s in her nature to not be confrontational, so when people are mean to her or things happen to her that aren’t necessarily great, I think sometimes she’s just like ‘Okay well I guess that’s life.' What would be exciting for me is for her to stand up for herself a little bit more.

Following a tentative report that Netflix was considering a sequel to its sweet summer hit, the streaming service finally confirmed a follow-up to To All the Boys I've Loved before on Dec. 20 via a video on Condor's Instagram page. Emulating her on-screen counterpart's dreamy habit of writing letters to her crushes, Condor was seen composing a Christmas wishlist when a FaceTime call from Centineo interrupted her. After hinting that their characters' dating contract would need revision, Condor broke the news that they were officially making a sequel.

Han's P.S. I Still Love You continues the story of Lara Jean and Peter, who first decide to pose as a couple after Lara Jean's letters to her various love interests are accidentally sent out. Determined not to let the boy next door believe that her feelings are real, Lara Jean initially uses Peter as a cover-up, but she soon falls for the popular athlete. TATBILB ended with the two professing their love for each other, but as seen in a mid-credits scene, the arrival of Lara Jean's middle school crush, John Ambrose McClaren, is due to complicate things in a sequel.

Here's to hopefully finding out if Centineo and Condor's P.S. I Still Love You wishes come true in 2019.