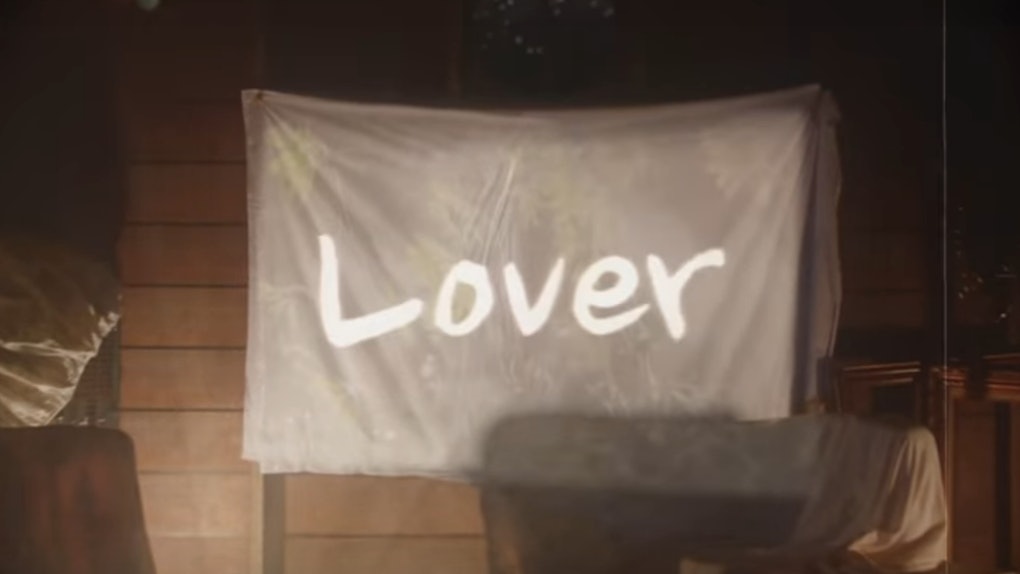 Almost every Swiftie out there is well aware of the fact that our beloved pop kween, Taylor Swift, is famous for hiding easter eggs within her music videos — some hint at feuds she's having with other celebs, while others insinuate relationship news. And many believe that clues in her most recent lyric video hint at the fact that she may have officially tied the knot with her boo. If you haven't already heard this theory about Taylor Swift's "Lover" lyric video, it suggests that Taylor could have some major wedding news. I can already hear the wedding bells.

After the release of the lovey-dovey new single, avid fans of T. Swizzle went to work combing over each and every line of "Lover," since the song had already sparked speculation on whether the 29-year-old "Blank Space" singer had gotten engaged to longtime boyfriend, Joe Alwyn. And while the engagement theory is totally plausible, many believe the footage from the lyric video confirms they could have already gotten married. According to writer Kathryn Lindsay, a hardcore Swiftie at Refinery29, the footage projected onto a white sheet in background of the lyrics looks just like it could be taken from a wedding ceremony, and TBH, I wouldn't put it past the "Teardrops On My Guitar" singer to casually throw that big news in there like that.

The video features various clips of Swift, a garden of gorgeous flowers, and an oceanside setting, which would — in fact — make for a seriously unreal wedding venue. As pointed out by Refinery29, the clips seem to be taken from different days and locations, but many appear to be taped in the same garden setting. And who knows? It could have easily been shot in Alwyn's quaint British neighborhood in North London, England. At one point, the video flashes a heart with a U.K. flag, which is undoubtedly a nod to her boo.

The most eyebrow-raising scene, however, is one minute, 57 seconds into the video. Refinery29 speculates it could feature a headshot of Swift with her hair done, and — you guessed it — potentially a veil. Take a look for yourself — it's hard to make out, but it seems like the proof is pudding. Watch the video for yourself, below, and see what you think.

But the evidence doesn't stop at the end of the video. Refinery29 also notes that in the last week or so, Swift has liked several posts which fans have written, saying they would play this song at their own weddings. Is that a sign, too? Is she trying to tell us something? Nobody really knows what any of this means, but I could definitely see her secretly getting married. It's so Taylor.

While the haters gonna hate, hate, hate, I — for one — ship Swift and Alwyn so hard. The two of them have the best body language, and are undoubtedly so in love. Hopefully we're on to something with the secret wedding theory (because seriously, how juicy would that be?). For now, nothing is confirmed. Either way, though, they're still the cutest couple to walk the planet.