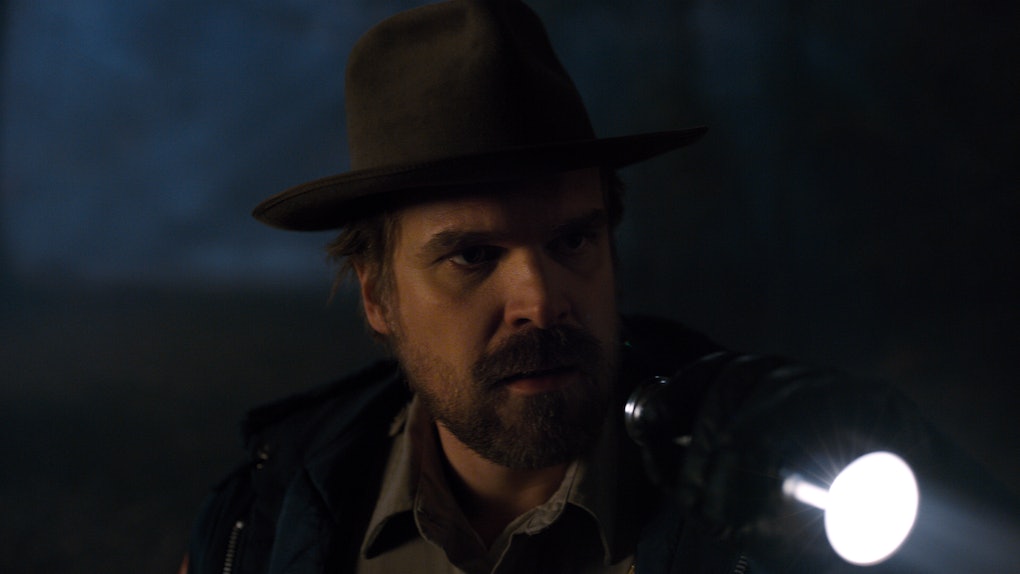 The SAG Awards are coming up this weekend, and Stranger Things will be back in the mix, nominated again for Outstanding Performance by an Ensemble in a Drama Series, which they took home last year. Reflecting on the second season, David Harbour, who plays the beloved Chief Hopper, says going into the second year, he had some concerns how the return to Hawkins would play to audiences. He was especially worried about the Stranger Things 2 scenes with Hopper and Eleven and how they would come across on camera.

Taking what is on the page and putting it on camera isn't always an easy task. One of the most remarkable things about a show like Game of Thrones (one of Stranger Things' main rivals in the Ensemble group) is how they took a series of novels, which are all based deeply within certain characters' point of view framings and retold it from a third person perspective without losing too much of the tale.

Stranger Things may not be based on a book, but when reading the script there's always points where actors wonder "How will this look on screen?" The writers may mean it to look a certain way, and the actors may be doing everything they can to emotionally get that meaning across, but will the audiences see it? Or will it read in a way that no one meant for it to?

That's where Harbour's worries lay. Speaking to Entertainment Weekly about the show, as well as his Outstanding Performance by a Male Actor in a Drama Series nomination for the role of Hopper, he admitted that (without anyone meaning it to) the scenes with Eleven, where he has her "locked away" in a "Cabin In The Woods" would cast Chief Hopper in a frightening light. He was terrified the reveal that he had Eleven in this hideaway would give audiences "serial killer" vibes.

I was terrified that the audience’s takeaway would be that this was either sexualized in some way or that it was in some way dangerous. I was very, very proud and overwhelmed by the response of people just getting that Hopper is a good guy and that he does really love her and care about her and is worried about her and that that relationship really resonated on a father-daughter level.

Not that the critics adored the way Eleven and Hopper were kept separate from the rest of the action, out in the woods. Individually each scene was great, from the Eggo dessert, to the flashbacks of Hopper introducing Eleven to music, to the huge fight sequence that blew out the windows.

But it was too much and, for most critics, it went on too long. Eleven is a central character, and the way the plot was structured, even after the extensive rewrites, kept her away from the core group until the 11th hour. (Actually the eighth hour, but that's quibbling.)

But those complaints wound up centering more on Eleven's detour into the big city during the "The Lost Sister" episode than they did focusing on Hopper keeping Eleven captive in the woods. The message that Hopper's desire was the keep her safe, like an over zealous father, came across to everyone and turned his behavior into something audiences could sympathize with, even if they weren't the best choices.

How the production will change things up in the Hopper/Eleven relationship for Stranger Things 3 is still a mystery. At the Golden Globes a couple of weeks ago, the cast revealed that filming for next season hadn't begun yet. Still we're hopeful to return to Hawkins before the end of 2018.