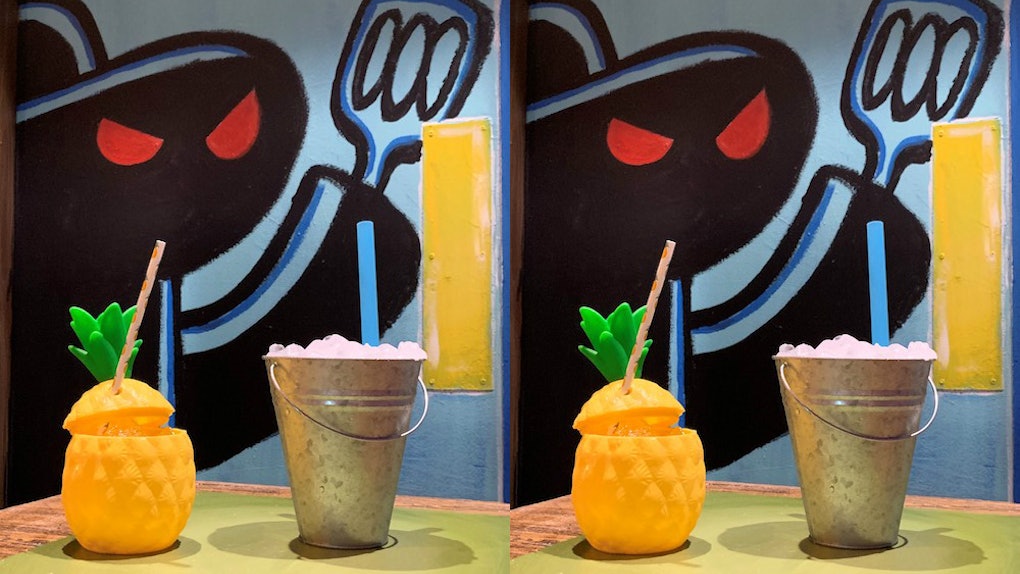 Every SpongeBob SquarePants-obsessed millennial out there dreams of flipping Krabby Patties with SpongeBob, meowing with Gary, chilling under a rock with Patrick Star, and complaining about life with Squidward. And while diving all the way down to the undersea village of Bikini Bottom isn't quite possible for us land folk (aside from Sandy Cheeks, of course), this SpongeBob SquarePants Pop-Up Bar will definitely bring a whole lot of nautical nonsense to your weekend. To be completely honest, I'm planning a road (er... boat) trip out there as we speak.

Anyone that's native to the bustling Windy City has checked out Replay Lincoln Park on Sheffield Avenue in Chicago, Illinois. The arcade bar has graced the neighborhood since 2012 with a plethora of vintage games, delectable craft beers, and specialty cocktails, and it puts on themed pop-up bars that satiate pop culture fanatics. Just in time for summer, beginning June 21, 2019, the bar will transform into Bikini Bottom's Salty Spitoon, according to Replay. And while the Spitoon only welcomed tough sailors on the show, you'll be happy to know they now accept weenies and even super weenies, too... but don't worry — I'm sure each and every one of you is tough as nails.

Anyway, once you make your way into the Salty Spitoon, you'll get the chance to sip from an extensive selection of specialty cocktails alongside SpongeBob, Patrick, and the whole gang. Choose between options like Kelp Juice, Patrick’s Black “Lemonad” Drink, Jelly Fish Jam Shots, and even one mysteriously called The Secret Formula. And once you start to get hungry, the bar has partnered with 2ndKitchen to provide you with none other than the ever-sacred Krabby Patty. But don't get too excited, because they aren't Pretty Patties.

While indulging on various themed drinks and Krabby Patties, you'll be able to enjoy an array of special events, such as a Bubble Bowl halftime show concert (when they'll obviously bump Sweet Victory), a "how tough are ya" contest, late-night jellyfish raves, and even karaoke. For the social media fiends out there, attendees can expect a variety of Instagrammable art installations designed by Pop-Up Squad, featuring Patrick’s infamous Rock, Squidward’s Easter Island Head, and — most importantly — SpongeBob’s two story Pineapple House. If you're lucky, you might even catch a glimpse of Plankton, who is probably off scheming somewhere.

In honor of the pop-up's opening weekend, Replay is letting anyone who RSVPs in advance via Facebook free express entry before 10 p.m. And if you ask me, that's definitely a solid deal... Mr. Krabs would be thrilled.

If you're interested in checking out the pop-up for yourself, make sure to check the opening times on the bar's Facebook page, because it changes by day. Also, keep in mind it's only running through July 14 — you'll want to make it there ASAP.

Everyone knows that SpongeBob is timeless, so it should come as no surprise that Replay's SpongeBob SquarePants pop-up is at the top of my to-do list. Between the specialty drinks, the Krabby Patties, and — most importantly — the Instagrammable opportunities, there's no way I won't drag all my friends there with me. To be honest, though, I'm most excited to snag that Krabby Patty secret formula. It's about to be all mine.