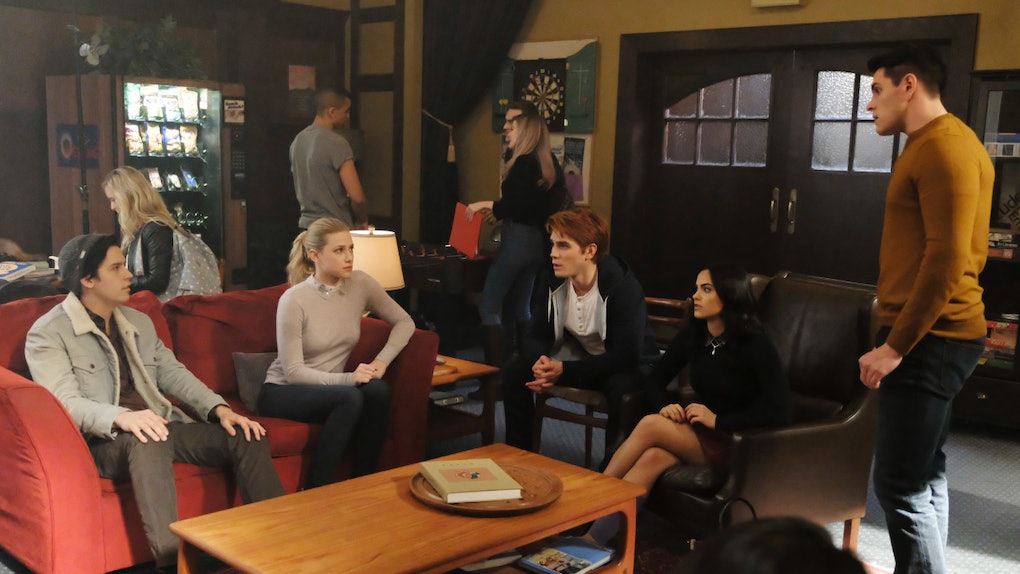 Riverdale's "Big Four" characters are the gang featured at the heart of the Archie comics: Betty, Veronica, Archie, and Jughead. But the TV show has widened their worlds. This world doesn't just include their high school-aged co-stars like Cheryl Blossom or Josie McCoy, their peers from the comic books, but also their parents. After all, they are high schoolers, and their parents are still involved in their lives. But now the series is going even further with a Riverdale Season 3 flashback episode, which will rewind the decades back to a new era — when the generation before went to Riverdale High.

The show started hinting around at this last season. Archie's father, Fred Andrews, and Veronica's mother, Hermione, had "the briefest of flings" back in high school, which is part of why they had an affair in the present day. Fred was also BFF with Jughead's father, FP Jones, at the time, and after Hermione dumped him, the two of them hung out together all the time.

As for Betty's mother, Alice Cooper, there are rumors in the fandom she and Fred could have been a "might have been." Even if they never were, she's having an affair with FP now. Who knows what happened then?

But that's the point. Fans want to know what happened then. And Riverdale is going to provide.

Speaking to the Television Critics Association summer press tour this past week, showrunner Roberto Aguirre-Sacasa confirmed there will be a flashback episode to the 1980s, when our current set of parents were high school teens. The chapter is entitled "The Midnight Club," and will be based on the classic '80s film The Breakfast Club.

According to the LA Times, Aguirre-Sacasa said:

Obviously, Riverdale [is a] much darker version of that. We’re going to learn about a really, really dark secret in Riverdale that the parents have been keeping since they were in high school.

This episode will air as the fourth installment of Season 3. But in case fans are concerned this means an entire hour with a new cast, not to worry. In a clever bit of dual casting, the kids will play their parents at their age, with KJ Apa as Young Fred Andrews, Lili Reinhart as Young Alice Cooper, Camila Mendes as Young Hermione Lodge, and Cole Sprouse as Young FP Jones.

This isn't the only time the show is planning on deep diving into the parents, either. Fans of the show are just as invested in the soap opera occurring in the older generation, and Aguirre-Sacasa sees an opening later this season to focus in on it.

We’d love to do a bizarre episode where we follow most of the parents, and the kids are just on the fringes. In Season 3, we’re in a place where we can do that. I think it’d be a blast.

Season 3 has already promised a bit of a time jump between seasons, fast-forwarding to the beginning of their junior year. Also, the show is going to focus less on the murder and more on the friendships between the kids, though there will still be a mystery. Where would Riverdale be without one?

More like this
The 'Cruel Summer' Season 1, Episode 5 Promo May Hint At That Mirror Theory
By Rachel Varina
When Will 'Riverdale' Season 5 Return In 2021? Its Mid-Season Break Is Long AF
By Rachel Varina
The 'Grey's Anatomy' Season 17, Episode 15 Promo Is A Farewell To Jackson
By Abby Monteil
Stay up to date