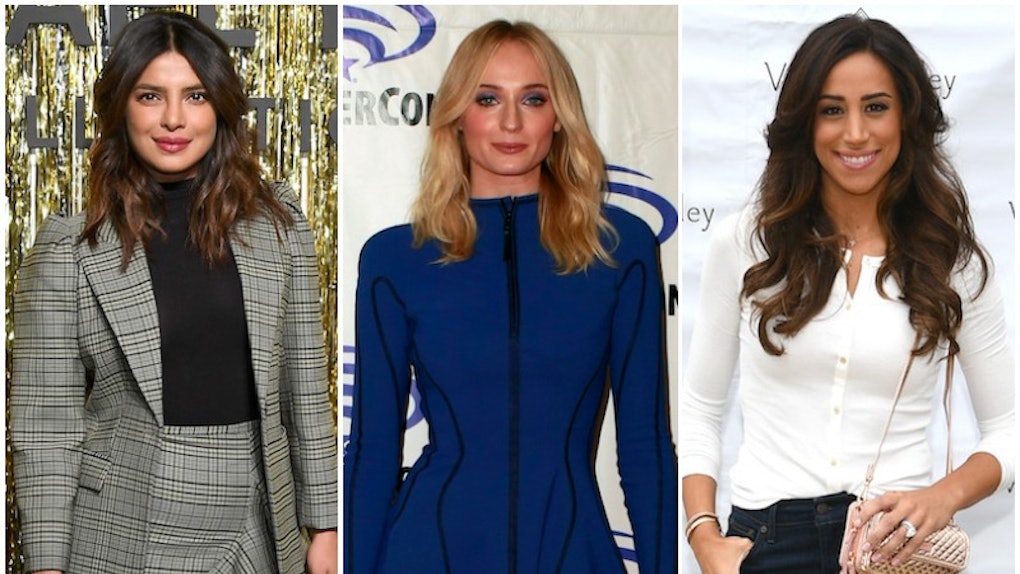 You can put the rumored beef between Priyanka Chopra, Sophie Turner, and Danielle Jonas away now, because the trio just enjoyed a really cute girls trip together. I know, I know — that's probably a little hard to believe, considering all of the rumors that have plagued the group, but there's a pic. And the photo of Priyanka Chopra, Sophie Turner, and Danielle Jonas honestly does prove that all is well between them.

On Friday, April 5, the ladies met up in New York, with their partners Kevin, Joe, and Nick Jonas in tow. According to People, they enjoyed some food at a Chinese restaurant called Mr. Chow then jetted off to Pennsylvania, where the brothers put on a show at Penn State University. But the real fun apparently happened on their private jet.

A photo Chopra uploaded to Instagram shows her sharing a seat with Danielle (who is beaming, BTW) while flashing a smile and a peace sign. Meanwhile, Turner is shown all up in their personal space, leaning into them while giving a playful pose. Apparently, they came up with an adorable name for themselves, too, as Chopra captioned the photo, "#JSisters."

Oh, and that's not even the end of it. The #JSisters snapped it up again later in the evening at the Penn State concert, where they hugged and flaunted warm smiles.

Now, I'm no body language expert, but this tells me that the naysayers should keep it movin'. There's nothing bad to see here.

This marks the second time that the ladies have gotten together recently — publicly, at least. They also made an appearance in the Jonas Brothers' video for "Sucker," their first single in almost six years, that came out back in February. If you haven't seen it, the video is pure fun and joy, and seems like it was a blast to shoot.

So, yeah. No bad blood here.

People have been trying to stir up drama between the ladies as recently as February, though. That month, Danielle wished Turner a happy birthday with an emotional post on Instagram that many people (for whatever reason) interpreted as shade toward the Quantico actress.

Happy birthday, @sophiet!! My girls and I are so blessed to have you in our lives. They can’t get enough of their Aunt Sophie! You deserve the world and I hope you’re having an amazing birthday! Love you.

After the internet wanted to criticize Danielle for the post, she responded with a comment, captured by Comments By Celebs, that stressed that everything was good. "I think everyone should stop with thinking that we don't like Priyanka she is lovely. [I am] so over people trying to make a problem," she apparently wrote.

This latest moment of the "J Sisters" kickin' it on a private jet is even more proof that their bond is as solid as ever. Now all they've gotta do is form a band, and my life will be complete.