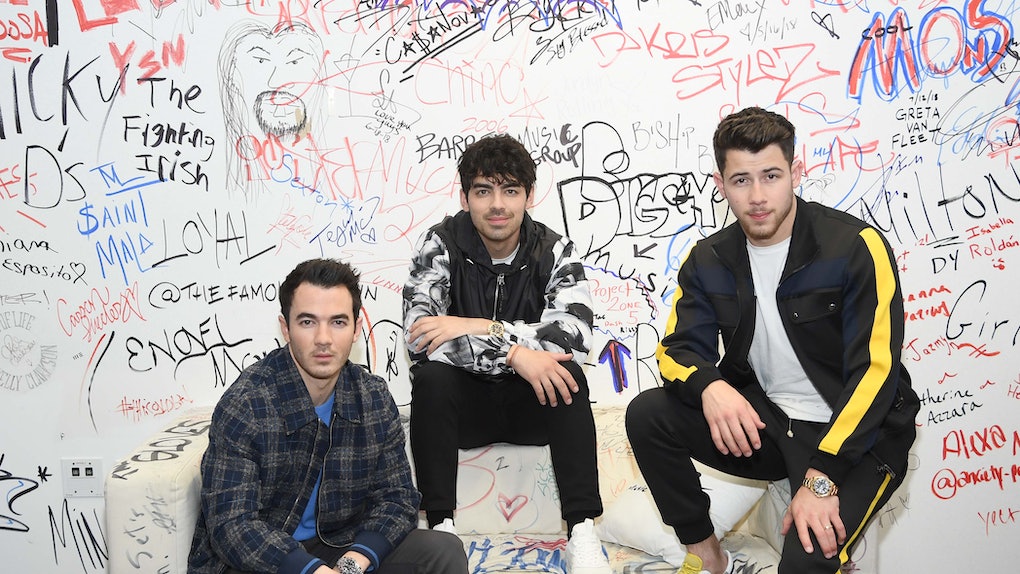 Now that the Jonas Brothers have reunited and put out two new singles, they're not wasting any time getting back into the concert circuit. On Friday, April 5, the trio made a surprise stop at Champs Sports Grill in Pennsylvania with the "J sisters" in tow, and the Jonas Brothers' Penn State concert with Priyanka, Sophie, and Danielle looks like it was just as epic as you'd imagine. From Game of Thrones references to a mix of new and old Jo Bros singles, it was definitely a night to remember.

After their surprise reunion just weeks earlier with the March release of "Sucker," Nick, Kevin, and Joe Jonas gave Penn State students the surprise of a lifetime when they decided to schedule one of their first performances since getting back together at a local college sports bar. Joe teased the appearance in a tweet a few hours earlier, writing that he had "something up [his] sleeve" if Penn State won their game that night, and the three brothers delivered just a few hours later.

In addition to their live debut of "Cool," the music video of which they dropped earlier that day, the Jo Bros brought their leading ladies along for the ride. Priyanka Chopra and Sophie Turner took to social media to share a photo of them with Danielle Jonas riding in a private jet.

Chopra captioned the photo, "The #Jsisters are finally together!!" alluding to a nickname that the women first came up with during the Quantico star's bachelorette party.

Chopra also teased that the group was a package deal that evening, sharing a photo of the three couples and the caption, "It’s #thejonai comin atchya!"

TBH, it was quite the power crew, and the crowd went wild when they realized that they would also hanging out with the Jo Bros' SOs that evening while getting down to their favorite songs from the band.

Amidst the mix of new and old favorites (according to Penn State student publication Onward State, the boy band started their set off with "Year 3000" and performed brand their new tracks "Cool" and "Sucker" live for the very first time), the crowd could be heard chanting "Lady Stark" in reference to Turner's highly-anticipated return to Game of Thrones on April 14.

The British actress shared a video of the moment to her Instagram, proving that Penn State already knows who it's rooting for to end up on the Iron Throne.

Needless to say, people are still in shock that the whole thing went down, and the Jo Bros and the J Sisters graced a college bar with their presence.

With the release of two chart-topping new singles and this surprise performance, it's only increasing speculation that the Jo Bros will be hitting the road together for a 2019 reunion tour. So, even if you missed out on what looks like the experience of a lifetime on Friday, something tells me that there will be plenty of other opportunities to belt out the lyrics to "Cool" and bust a move. Here's hoping that the J Sisters will also be along for the ride.