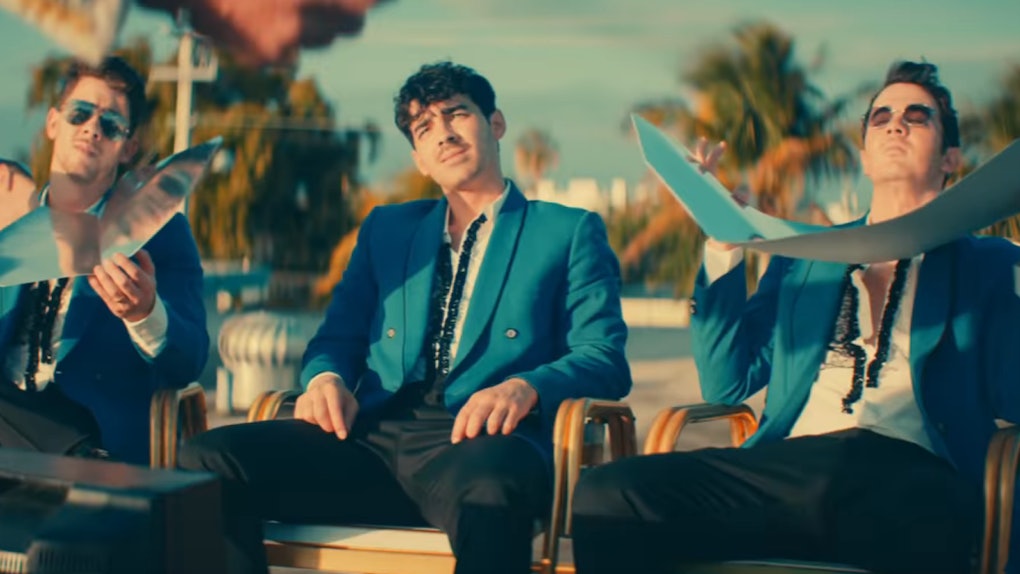 What could be more fun than spending some time with the Jonas Brothers on the beach? Well, that is exactly what you get in the Jonas Brothers' "Cool" music video. As you've probably heard by now, the Jonas Brother dropped a new single called "Cool" on Friday, April 5 and the music video for it is all kinds of fun. In it, you can see all the brothers enjoying themselves on the beach with a whole bunch of other people. There are even some wild costumes and things to see in the video, so it's definitely worth a look.

The song is all about feeling yourself and being super cool, and the video falls right in line with the theme. The lyrics are super cool as well! Have a look at them:

I mean, the lyrics alone are enough to tell you that the Jonas Brothers are serious about their "cool" vibe right now. Even their Instagram announcements for the song were very summery and very, well, cool. In the days leading up to the song's release, the Jonas Brothers shared a couple of photos of themselves in beachwear and sunglasses. So, they were definitely gearing up for something special with this song.

The video only puts a stronger emphasis on the message the guys are trying to convey. Actually, it's exactly what you'd get if you took the fun, jokey three-act structure of the Jonas Brothers' "Burnin' Up" music video and mashed it up with the lazy, beachy vibe of "Lovebug." It literally has all your favorite aspects of both videos (just no Selena Gomez or Camila Belle).

In the video, the Jonas Brothers are chilling, minding their own business sunbathing when some dude comes up to them and convinces them they should perform at an old folks home because "it's bingo night" and the residents would certainly love them. And, to put it lightly, The JoBros deliver. They go for a romp on the beach, dance with beach-goers, get buried in sand, play with the birds, go on a boat ride, and — most importantly — show off some hella cool dance moves.

You can check it out down below: