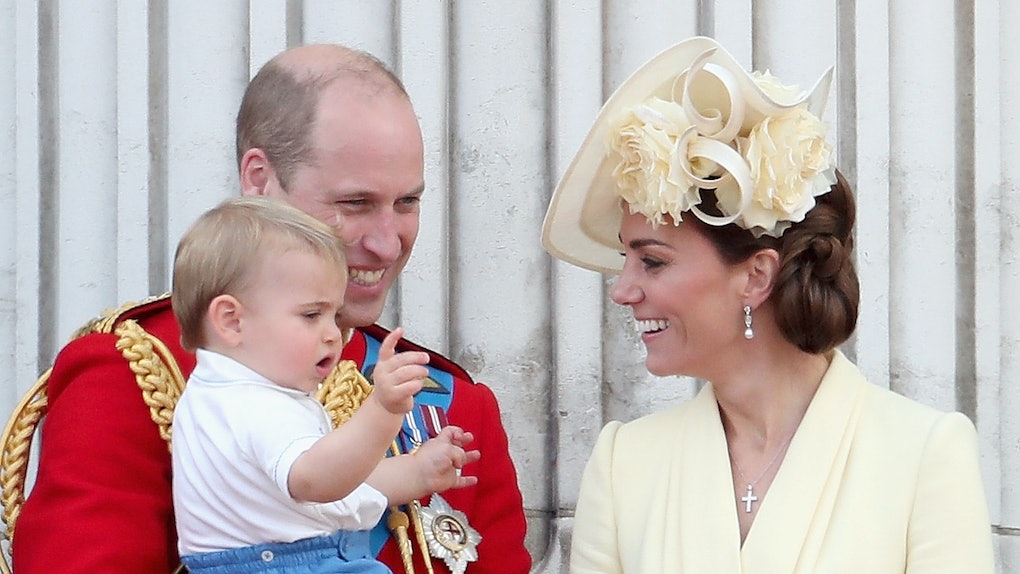 If you thought you looked great in sunnies, think again. You've been outdone by Prince Louis Arthur Charles of Cambridge, and Starter of Fashion Trends. Seriously, this photo of Prince Louis wearing Kate Middleton's sunglasses is just too much! He's beyond adorable. I'd like one of him and a pair of those shades to match, please.

On Wednesday, June 10, the playful little 1-year-old turned what was his father Prince William's charity polo match into the Prince Louis Show. Wearing a navy blue polo shirt and green shorts for the royal occasion, the tiny tot turned heads by adding one simple, yet statement-making accessory — his mother Kate Middleton's sunglasses. The $173 pair of tortoiseshell Ray-Ban Wayfarers look like they were made for the baby prince despite their oversized build on his tiny head. Like, just wait until you see how cute he looks while making funny faces at his family. He is clearly living his best baby life and I love it. And, so does his mom. The Duchess of Cambridge literally can't take her eyes off him. Me neither Kate. Me neither.

And, if you think the royal day couldn't get any cuter, you'd be wrong. While this photo only offers a glimpse of royal baby Archie Mountbatten-Windsor, a glimpse is more than enough for me. The mere appearance of this sweet baby angel cradled the arms of his mom, Meghan Markle, is just so precious. I can tell he's just a little bundle of heaven. Cute factor on 10.

Actually, you could scratch that, cute factor on 11 because Louis' older brother Prince George and older sister Princess Charlotte were also in attendance and looking super adorbs. George wore a green polo shirt and camo shorts with a pair of navy-colored tennis shoes while Charlotte donned a pink printed dress with white sandals. Casual, yet cute. Both forewent mom's sunglasses.

However, George found another elaborate accessory to make do with. In photos captured by the press, George can be seen picking up a spare polo mallet and swinging it to and fro. He even took a moment to place it against his head, making a silly face in a baby-Louis-like fashion. Guess, it runs in the family. While the mallet may not be as fashionable as the Duchess of Cambridge's designer shades, George didn't seem to care. He looked like he was having a blast, nonetheless. Well, that's until other press photos revealed his mother taking it away from him. At least it was fun while it lasted, right George?

The King Power Royal Charity Polo Match, which both Prince William and Prince Harry took part in (on opposite teams, might I add), honors Vichai Srivaddhanaprabha, the owner of Leicester City soccer club who died in a helicopter crash in October 2018. The match also raises funds and awareness for charities supported by Harry and William. I say the match also makes for a lovely day to see the royal brothers and their cute royal kiddos spending the day together, wouldn't you agree?

More like this
BTS' "Butter" Teaser Photos Show Off Their New Hair Colors In HD
By Michele Mendez
'He's All That': Premiere Date, Cast, Trailer, Filming News, & More
By Dylan Kickham and Abby Monteil
These Tweets About Amy Adams' 'Woman In The Window' Are Brutal
By Abby Monteil
Stay up to date