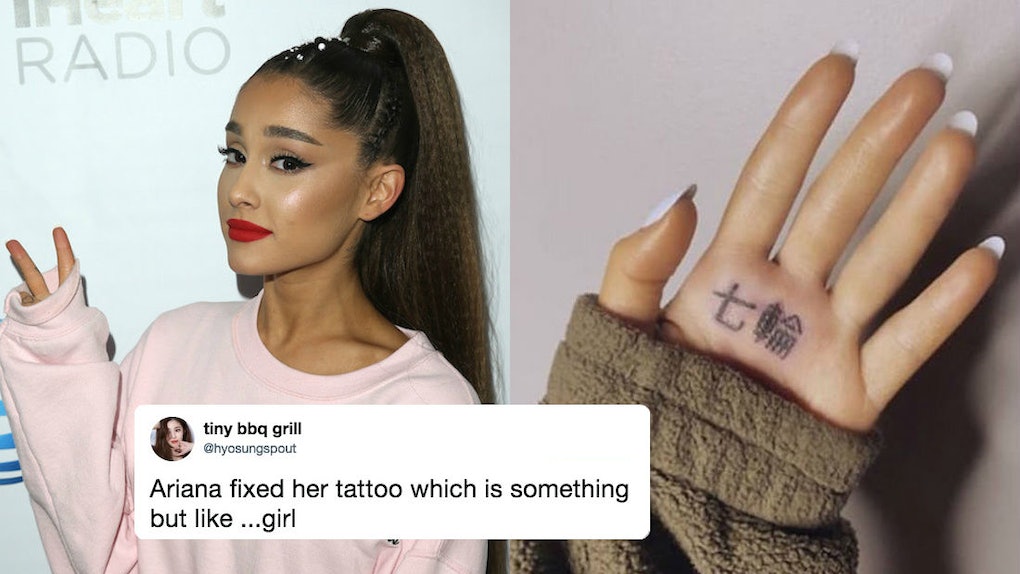 Ariana Grande no longer has a tattoo that says "BBQ grill" on her hand. Great! If you have no idea what I'm talking about, Ariana Grande recently tried to get a meaningful tattoo in Japanese kanji characters dedicated to "7 Rings" on her hand, but she misspelled it and it came out as "BBQ grill." She debuted the tattoo on her left palm earlier this week and quickly learned from her Twitter followers that what she thought was a tribute to "7 Rings" actually meant "BBQ grill." Now, after consulting with her tutor (she's learning Japanese), she's fixed the tattoo. The photo of Ariana Grande's fixed "BBQ grill" tattoo still has fans split for justifiable reasons.

First and most importantly, people on Twitter feel that this is just another example of what they feel is Grande's continued appropriation of the Japanese culture. One piece of "7 Rings" cover art that can be seen on Spotify features Japanese lettering. The "7 Rings" music video also includes a lot of Japanese fashion trends that essentially mean Grande is using the culture as part of her evolving aesthetic.

She took things even further by literally getting the lettering tattooed on her hand, which invited more critique, with followers saying she's continually exploiting Japanese culture (especially considering it seems she doesn't have a complete understanding of the language).

Grande posted the photo to her Instagram story earlier this week. In a now-deleted tweet, Grande originally defended the misspelled tat, tweeting, "Indeed, I left out 'つの指' which should have gone in between. It hurt like (expletive) n still looks tight. I wouldn’t have lasted one more symbol lmao. But this spot also peels a ton and won’t last so if I miss it enough I’ll suffer thru the whole thing next time," according to USA Today. But it seems she had a change of heart.

Not long after debuting the tattoo, she posted a screenshot of a text conversation with her Japanese tutor.

The conversation showed the tutor mapping out the error in the tattoo. I'm just wondering why she didn't ask her tutor about this tattoo idea in the first place?? Like, girl, proofread??

On Jan. 30, she revealed the plan to fix the mistake on her Instagram story.

"We have a plan @kanenavasard see u tonight," she said. "Thankful for the guidance and correction."

She revealed the new tattoo not long after.

The new tattoo showed two new additions to the tattoo: one new character plus a heart.

"Slightly better," she said. "Thanks to my tutor for helping me fix and to @kanenavasard for being a legend. and to my doctor for the lidocaine shots (no joke). rip tiny charcoal grill. miss u man. I actually really liked u."

People on Twitter were justifiably reading Grande for filth for getting the tattoo at all. The huge error was just an added problem.

This criticism existed before she even got the tattoo, however. There were plenty of people who weren't feeling the "7 Rings" music video for the same reason people don't like the tattoo.

Other fans aren't taking the appropriation seriously and seem to think fixing the tattoo is a sign of growth.

And then there are fans who pointed out that fixing the tattoo does not address the underlying issue of exploiting other cultures.

And now, fans are pointing out that even the "fixed" tattoo is still wrong. Apparently, it says "Japanese BBQ finger."

What it boils down to is that Grande probably should never have gotten the tattoo in the first place. Putting on other people's cultures as an aesthetic and not caring about or understanding what it actually means is inappropriate, to say the least. And fixing the mistake in the tattoo doesn't fix the fact that the tattoo itself, no matter what it says, is using a culture outside of your own for your own aesthetic benefit.