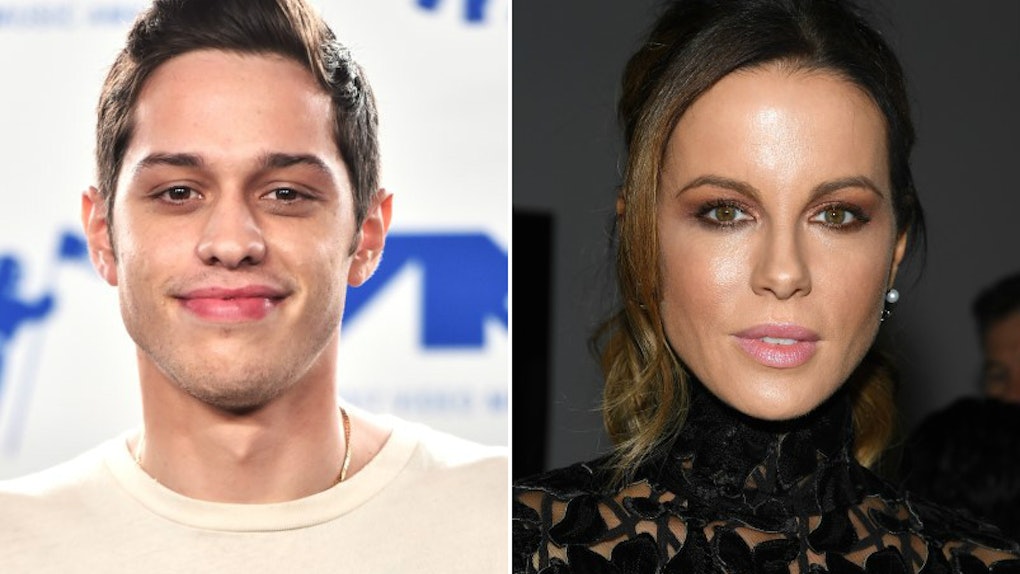 Are things heating up in the relationship department for Pete Davidson and Kate Beckinsale? Well, according to a new report from E! News, they might be! The 25-year-old comedian and 45-year-old actress have reportedly been seeing each other more often. While the two stars are seemingly keeping things casual, E! News’ Pete Davidson and Kate Beckinsale relationship update will definitely make you think there’s more to the relationship than that! Elite Daily reached out to Davidson and Beckinsale’s teams for comment on the report, but did not hear back by the time of publication.

According to E! News’ report, Davidson and Beckinsale have gotten close since they were first seen flirting with each other at the Golden Globes back in January 2019.

"They spend most of their time on opposite coasts so it's a casual thing," a source close to the situation explained to E! News. "But they are going to keep talking and having fun together."

So, the relationship is still pretty casual, but there’s definitely a spark between them! E! News’ source revealed that "Kate thinks he's the sweetest and nicest guy."

Apparently, Beckinsale loves that Davidson has such a great sense of humor. "They may seem like an unlikely match but she thinks he's great and she just loves all the laughs she has with him," E! News’ source said.

I guess that means that Davidson and Beckinsale are going to be taking this relationship as far as it can go! It’s good to see Davidson on the mend after his breakup from Ariana Grande, though.

“Kate and Pete were flirting at the InStyle party and she was following him around a bit and waiting for him,” a source told Us Weekly at the time. “People approached her and she didn’t want to talk to anyone else.”

According to that source, Davidson’s attention was on Beckinsale pretty much the entire night save for a few minutes when he stepped away to greet some fans. The source also explained that the two stars didn’t show any signs of a romance, but “it definitely seemed like Kate was interested in him.”

Around the same time, a source for E! News said that Davidson and Beckinsale were looking “very cozy” at another Golden Globes party.

“She was very flirty with him and there were definitely some vibes going on," the source said. "Pete was smiling and laughing with her and she was all about him.”

So, with all that mind, it’s no wonder that Beckinsale and Davidson have continued to see each other. They clearly shared some special moments at the Golden Globes and now it seems like they’re both keen on seeing where a possible relationship will go. Plus, Davidson seems to be taking a different approach to this relationship than he did with Grande. He hasn’t proposed yet, so maybe he’s still feeling things out! Only time will tell, I suppose.