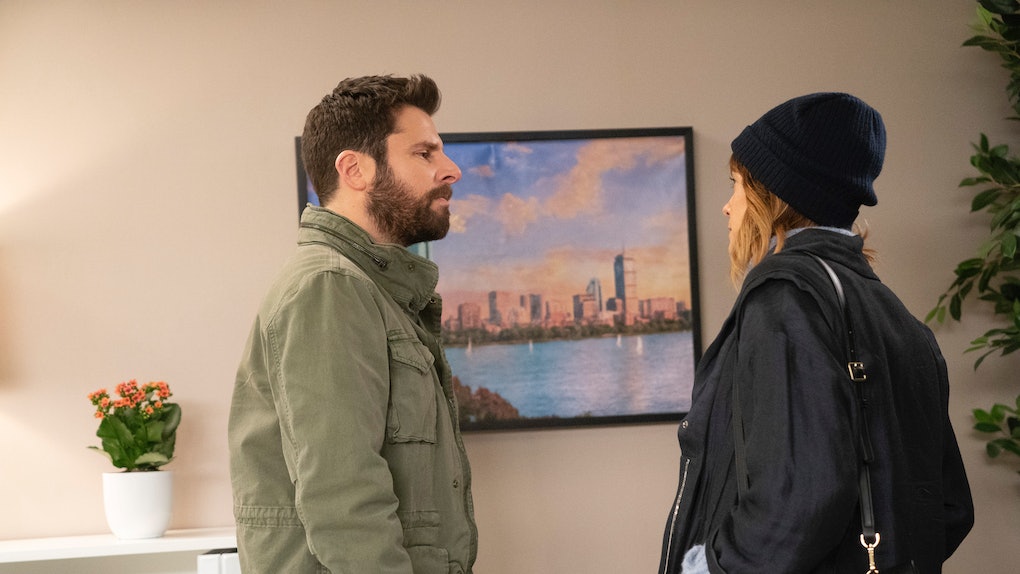 This Painting Detail On 'A Million Little Things' Explains So, So Much

A Million Little Things deemed itself worthy of being the spiritual successor of This Is Us during its Jan. 31 episode, proving viewers wrong about the identity of Barbara Morgan and leaving a trail of breadcrumbs that was hidden in plain sight for people to interpret. Thanks to Ashley fessing up about Jon's more obscure business deals, Gary and Delilah found his secret apartment and uncovered a new detail about who Jon's mysterious insurance beneficiary was. This painting detail on A Million Little Things may have proven that Barbara knew Jon longer than any of his friends and family did.

Although UnREAL star Constance Zimmer was long expected to be the fourth, unknown beneficiary on Jon's Rutledge insurance policy, Jan. 31's "Twelve Seconds' revealed that she actually played a city council member who failed to secure the votes ensuring Jon's risky financial and business moves were worth the stress. Councilwoman Jeri worried about whether she contributed to Jon's death, but when meeting her, Delilah (Stéphanie Szostak) insisted that she couldn't live her life feeling trapped in a bubble of grief and guilt.

While the official introduction of Jeri explained why Ashley (Christina Ochoa) was able to easily track her down, it only broadened the show's mystery surrounding Barbara Morgan. Who and where is this woman if she never appeared at Jon's funeral but is still included on his life insurance policy? The promo for Feb. 7's "Someday" confirms that Gary (James Roday) finds Barbara's address, but additional press information says that the woman appearing in the preview (Drea de Matteo) is simply someone who lives at Barbara's old home. To be fair, double lives and secret identities on A Million Little Things aren't too much of a reach, so de Matteo's character could always be more important than network statements are letting on.

Because of this ambiguity, we may not meet Barbara right away next week, but the ending of Jan. 31's episode provided more insight into who she could be.

Following Ashley's delivery of Jon's blue envelope and the knowledge that his mortgage bills were arriving at his secret apartment, Gary and Delilah visited the old building for answers about Barbara. Inside, they found photo albums from before Delilah met Jon (Ron Livingston), and Gary realized that the view outside the window matched that of the painting Jon hung up nearby while Gary was in the middle of chemo treatments.

Jon previously told Gary that a view at Harvard was the painting's inspiration, implying that the apartment and all of its relics are from Jon's college years. When Delilah and Gary then inspected the painting at Maggie's chemo station, they noticed that the artist's signature read "B. Morgan." Could this mean that Barbara and Jon lived in the apartment together? Was she possibly his first love? Jon clearly has an intensely nostalgic side to him, but if he was so secretive about Barbara and his life before Delilah, something unforgivable must have happened between them.

Whoever she is, Barbara was clearly important to Jon, and he trusted her to use the Rutledge fund money to look after Delilah and the kids. Fingers crossed that Gary, the Dixons, and the rest of the guys are able to figure this all out soon.

Season 1 of A Million Little Things continues on Thursday, Feb. 7, at 9 p.m. ET on ABC.

More like this
The 'A Million Little Things' Season 3, Episode 12 Promo Brings In Gary's Dad
By Umber Bhatti
'Grey's Anatomy' Quotes That Will Heal Your Broken Heart
By Alexis DeCarvalho and Lexi Williams
These Tweets Of 'Girl Meets World' Videos Show Why The Series Is Still Controversial
By Cianna Garrison
Stay up to date