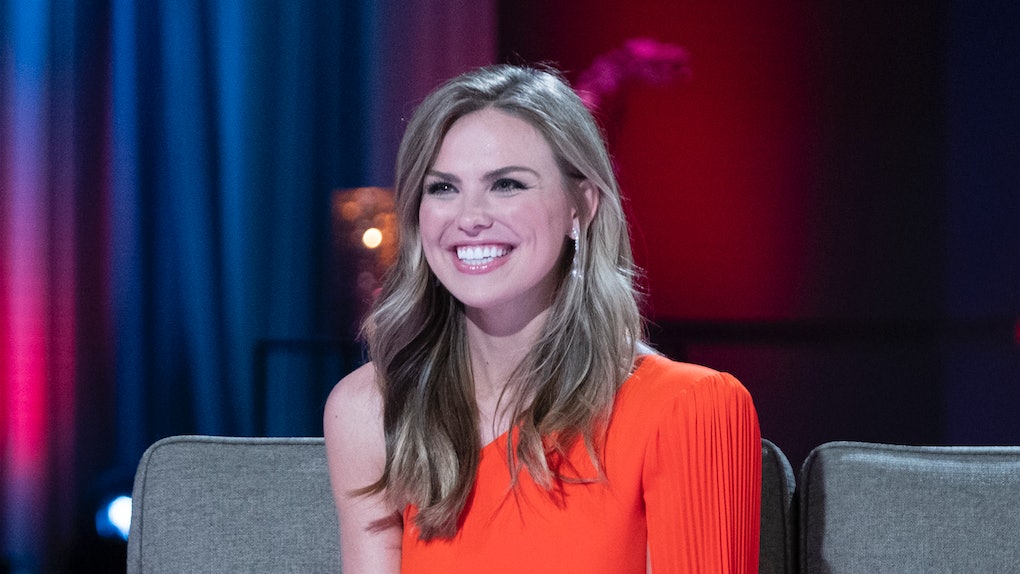 Thanks to her first promo being straight out of a storybook, Bachelor Nation already knew new Bachelorette Hannah Brown was going to be the modern Cinderella lead they deserve in 2019. If Hannah ditching her perfectly coiffed look in favor of loose hair and a pantsuit wasn't enough to convince you of her true Bachelorette potential, her season's latest teaser may be the ticket. This new Bachelorette promo shows Hannah taking full control, so it looks like she's finally found her leading lady spirit.

ICYMI, the first teaser for Hannah's Bachelorette season featured the former Miss Alabama in full pageant attire while walking through a forest to the tune of Grace's cover of "You Don't Own Me." As the ad asked viewers, "Think you know her? Think again," Hannah lost her sparkly tiara and poofy skirt to parade through the forest in a fierce pantsuit. Because who ever said a Bachelorette needed a ballgown to succeed?

The 24-year-old is clearly down with ABC's plan to market her as the Bachelorette you don't quite know, but we're destined to see a new side of Hannah as soon as her season debuts. The network just released a promo offering a peek at Hannah's take-no-prisoners approach to Night One at Bachelor Mansion. She may be a "beast," but Hannah is definitely following in the footsteps of past Bachelorette Becca Kufrin and doing the damn thing on her way to find true love.

While she fell victim to insecurity and group drama on Colton Underwood's season of The Bachelor, this ad hints that Hannah definitely adjusts well to being in charge on The Bachelorette. The teaser first recaps her emotional goodbye to Colton, which inspired her to tell cameras, "I will not allow myself to not feel chosen every single day." After this reminder of why fans grew to appreciate Hannah, the promo offers a glimpse at the season's first episode as Hannah is seen arriving at the mansion and greeting her full group of men for the first time.

The teaser lacks her classic "Roll Tide" cheer, but it captures just how exhilarating the first night of the season must be for the Bachelorette. A contestant who appears to be Luke, one of the five men she met at "After the Final Rose," tells Hannah, "I'm seriously really, really into you." Making her fellow awkward girls proud, she replies unabashedly, "Same."

But Night One is never just a sea of roses and compliments. It looks like Hannah also runs into some early concerns about one of her men, as the promo shows her approaching a contestant and demanding to talk to him. As they walk into a private space, the man clearly isn't taking her request seriously enough, so Hannah snaps, "No, come on!"

Get ready, folks, because Hannah is taking names and won't let us forget it. Is too early to start stocking up on Monday night wine now?

After her fumbling debut as Bachelorette on "After the Final Rose," it's good to see some proof that Hannah rose to the occasion and settled into her new role with a fierce attitude. The promo even closes with her saying, "Don't mess with the beast," so it's safe to say that Bachelor Nation has learned its lesson about what to expect from her. You go, girl!