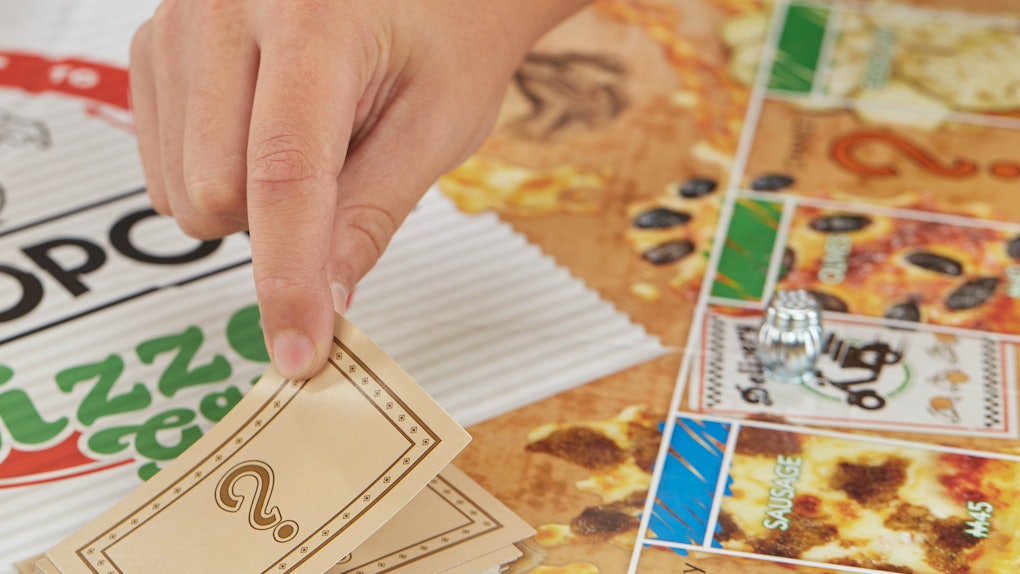 The holiday season is here and most of us are running around trying to snag the perfect gifts for our friends and family. Well, I'd like to tell you that the search is over. This Monopoly pizza game is the perfect holiday gift for cheese lovers — and let's face it, who doesn't love some cheese? I've already order like five for myself.

Delish has the scoop on a new Hasbro game that's dropping just in time for the holidays. The famous toy company is releasing a new version of its classic Monopoly game called Monopoly Pizza. The game hasn't officially dropped yet, but you can preorder it now from Walmart or Amazon for 20 bucks and get it by Christmas.

Is Monopoly Pizza exactly what it sounds like? Yup. It's just like the game you're used to, except instead of picking up properties like Park Place and Boardwalk, you'll be running around the board picking up different types of pizza. This is not a drill.

According to Hasbro, the object of the game is to collect pizza variations like "classic pepperoni," "mushroom," or even "barbecue chicken." Instead of collecting rent off properties, players will have to round up a "color set that corresponds to a type of pizza." Basically, as I understand it, you'll be collecting ingredients to make different pizzas.

Here's how Hasbro explained the rules of Monopoly Pizza to Delish:

Players will move around the game board trying to buy as many types of pizza as they can -from classic pepperoni or spinach to mushroom. Instead of buying properties or collecting rent, players will aim to collect a color set which corresponds to a type of pizza, such as veggie lovers, barbecue chicken or even mac and cheese! A full set of flavors combines to make an awesome new pizza, giving those cards a higher value. At the end of the game, the player who collects the most pizza slices wins.

Now that you're in on some of the new rules, there are a few other changes coming. Players are also looking at a whole new set of pieces to choose from. Gone are the laceless shoes and top hats (I was always a thimble sorta gal). Instead, you can pick to be a cheese grater, a pizza slicer, or even a delivery bike. I didn't think Monopoly pieces could get any more adorable, but, boy, was I wrong. Also, the whole thing is packaged in a pizza box.

Insider's Kristen Acuna shared some pictures of the game pieces, board, and packaging to Twitter on Friday, Dec. 14, so you can see the new look for yourself:

I wonder what the classic "chance" and "community chest" cards will look like. If one of them says "extra cheese," I'm in. Also, I'd like to make the case that the jail on the new board should just be a long line to get a New York slice. Is there some higher-up I can talk to about that? Get at me.