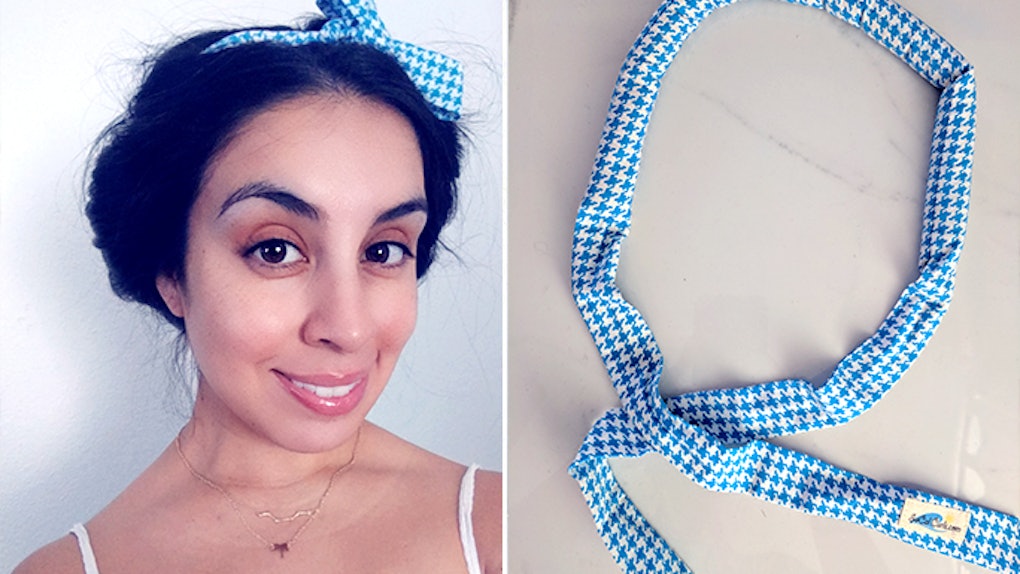 This Microwavable Curling Headband Just Made Me Ditch My Curling Iron

I usually spend so much time on my makeup, there's little left over to pick an outfit and do my hair before running out the house. All I need is an extra hand to pick up a curling iron and create perfect beach waves while I simultaneously draw on a crisp cat eye, right? But because not even the most sophisticated of beauty hacks can cheat evolution, I ordered a microwavable curling headband to do my hair for me while I make up my face.

When I received my SoCal Curls Hair Curling Tie ($19; SoCal Curls), I noticed that it's filled with beads — it's like a tiny bean bag for your hair. I actually didn't realize it had a filling when I ordered it, but it totally makes sense now. The beads packed into the headband are microwave-safe, and they stay warm to help your hair keep its shape. I popped my headband into my microwave and warmed it up for 30 seconds (on a microwave-safe plate). When I removed it, the headband was warm, but not too hot.

If this headband works as well as it claims to, I thought, I can still wear my hair in loose curls without spending too much time fussing with a curling iron. Plus, I won't have to worry about heat damage. I'm in!

My hair already has a wave to it, but the pattern is inconsistent. I have some waves that look like a legit curl, others have a zig-zag shape to them, and some pieces are completely straight. Every once in a while, you'll even find a section of hair twisted so tightly, it looks like a braid. When I have time to spend on my hair, I curl it to give it a consistent shape. I already have texture; I just want it to look more polished.

As soon as I took the headband out of my microwave (I was still standing in my kitchen), I rolled it into my hair. I found that the easiest way to get it on is to start in the middle, wrap your ends around, then roll up the rest of the way. As it turns out, this is actually so wrong. I was supposed to tie the headband on first, then wrap pieces around the heated part. Oops.

That's what I get for being overly excited and not reading directions. But it was already on, so I left it as is.

Once I had all my hair in, I tied it at the top of my head to secure it. It was actually kind of cute. I'd never leave the house like this, but my husband didn't even flinch when I pass him in the hallway (though, poor guy has seen it all at this point).

After about an hour of wearing it, the headband still felt warm under my hair. When I put it into my hair, I tried to work really fast in hopes that it wouldn't cool down before I even got it on, but I'm realizing I didn't have to rush after all. Those microwavable beads are legit, if you ask me.

The tutorial says to wear the headband for 30 minutes, but I gave it an hour. Then, it was time for the big reveal!

The first thing I noticed was that my hair was significantly less frizzy. Then, I realized, though the wave was subtle, it had a consistent pattern throughout. This is perfect for the girl who wants a beach wave, but can't maneuver a curling iron. Granted, I used it all wrong, but I especially love that I was able to achieve the look without being tied to my vanity for an extra hour. I got some work done and forgot I was even wearing the headband. I'll still use my curling iron when I have somewhere really special to go, but this headband is about to become part of my daily routine.