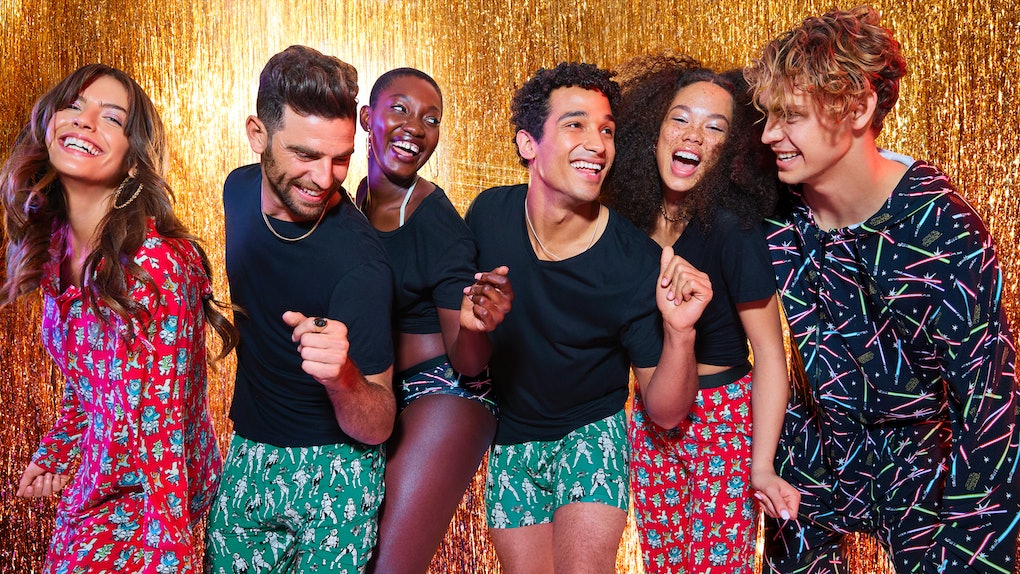 Have you ever wondered what it would be like to attend a space rave alongside some Ewoks and Stormtroopers while wearing nothing but your skivvies? The new MeUndies x Star Wars collection is here to make that a reality, or at least as much of a reality as is possible. Featuring a lineup of ultra comfy silhouettes that come in three new prints that reimagine some of your favorite Star Wars characters in a disco dance party setting, it's got to be the most stellar loungewear ever. Trust me on this when I say you're going to want to buy everything, even if you've never seen a single episode of the epic space opera.

Described by MeUndies in a press release as the "hippest party in the galaxy," the Disco Collection includes three underwear silhouettes, lounge pants, and—wait for it—onesies. See what I mean when I said you'd want everything? What's more, each style comes in the three new prints, which are what makes the collection so spectacular. First up is Death Star Disco, which boasts a tagline of "Command the dance floor" and features stormtroopers getting down under a glittery disco ball. If you prefer your underwear to be evil-free, the Yub Nub print is for you. Featuring Ewoks dancing and playing the heads of decapitated stormtroopers like drums, its motto of "Party like you just brought down the Empire" is exceedingly appropriate. Finally, there's the Lightsabers print, which sees colorful Jedi weapons set against a starry background and is described as "An elegant print for a more civilized age."

Available now, the collection ranges in price from $45-$78 (even less if you're a member) and is available in women’s sizes XS-2XL and men’s sizes S-3XL. Take a look at its offerings below and get ready to slay all day and night long.

Comfy briefs with a cheeky twist! At $15 per pair, this pack is a steal. I usually only wear briefs when I sleep but these look so legit that I'd want to wear them all day long.

This pant comes in all three prints and boasts a slightly more tight and tailored fit. Made from a super soft fabric, they're ideal for Netflix and chilling.

If you prefer a more classic underwear silhouette, these straightforward briefs are for you.

As an adult who owns three onesies (sloth, sock monkey, and koala), this pick is definitely on my to-buy list. What can I say, there's just something so ridiculously comforting about slipping into a style that you also sported as a five-year-old and feels like a wearable cocoon!

Hello, only underwear silhouette I want to wear to bed EVER again! Seriously, these boyshorts plus an oversized tee sounds like a total weekend outfit dream. Maybe even a just-dropped Star Wars x Uniqlo tee to really keep the thematic party going? There's no better time to nerd out with what you wear than when you're lounging.