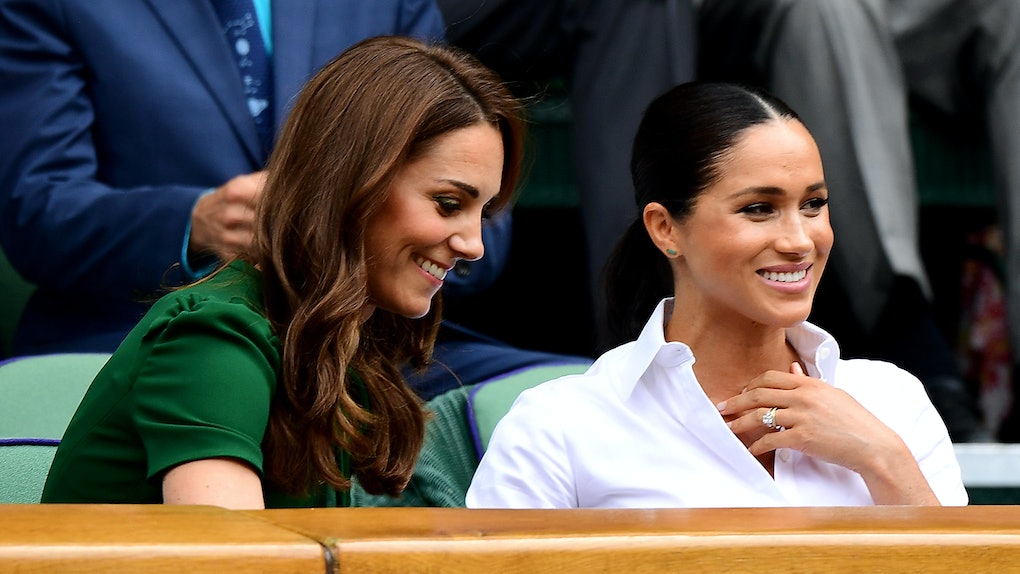 Meghan Markle and Kate Middleton have been spotted at quite a few events together over the past year and it got me wondering, are Meghan and Kate Friends in 2019? Well, according to a new Meghan Markle and Kate Middleton friendship update, the reported answer is not really. You may have hoped the duchesses would be as close as sisters, but it seems like they're just sisters-in-law.

In a Sept. 18 issue of Us Weekly, a source revealed Meghan Markle and Kate Middleton will probably never grab mani-pedis together. OK, so they didn't use those exact words, but the point is the two women are reportedly not going to be gal pals any time soon. According to the royal insider, Markle and Middleton “will never be best friends, but they are civil." Elite Daily reached out to Kensington and Buckingham Palace for comment regarding the claims, but did not hear back by the time of publication.

Now you might wonder why this might be. Well, according to another source, it's not due to any gripes between the duchesses, but rather they're just "from two totally different worlds." Markle is an American actor and Middleton grew up a British socialite, which makes their pasts quite different.

Let's also be real fam, the Suits actor's transition to royal status wasn't received well by everyone in the UK. According to another insider at Us Weekly, comparisons to Middleton only made the situation more complicated over the years. "Meghan feels that there is a standard set very high by” Duchess Kate, said the source in August 2019. “It’s discouraging that the British public holds her up to that. Meghan has this sense of isolation being in the U.K., subject to cruel British media. Her hands are tied and she isn’t allowed to defend herself. It has been very difficult." Elite Daily reached out to Kensington and Buckingham Palace for comment on this claim, but did not hear back by the time of publication.

That sort of scrutiny sounds difficult indeed. Do y'all remember when Prince Harry and Markle posted a birthday tribute to Prince George on the 'Gram and trolls said it was inappropriate? Many blamed Markle for improperly addressing the "future King of England."

This came after Prince Harry, Markle, Prince William, and Middleton decided to split their joint charities. In June 2019, an Us Weekly insider explained that the decision, though amicable, was due to a difference in opinion. "Kensington Palace is painting this as a natural progression, but there were definitely issues with Meghan and Kate seeing eye to eye on how they wanted to run this charity," said the source, before claiming that Markle wanted “to be more involved — create initiatives and be in the trenches,” while the Duchess of Cambridge, wanted to be “more hands off.” Elite Daily reached out to Kensington and Buckingham Palace for comment on the claim that Markle and Middleton had issues running the joint charity together, but did not hear back by the time of publication.

The source went on to add that there was not a “disagreement or rift” between Markle and Middleton, but, at the time, the Duchess of Sussex was “figuring out what she can do in terms of being active [and more] comfortable with her role.” Hmm... so, it sounds like a difference of opinion — nothing more or less.

Regardless, just because two women are in the same space or workplace doesn't mean their only two options are besties or enemies. I see nothing wrong with being cool and cordial.